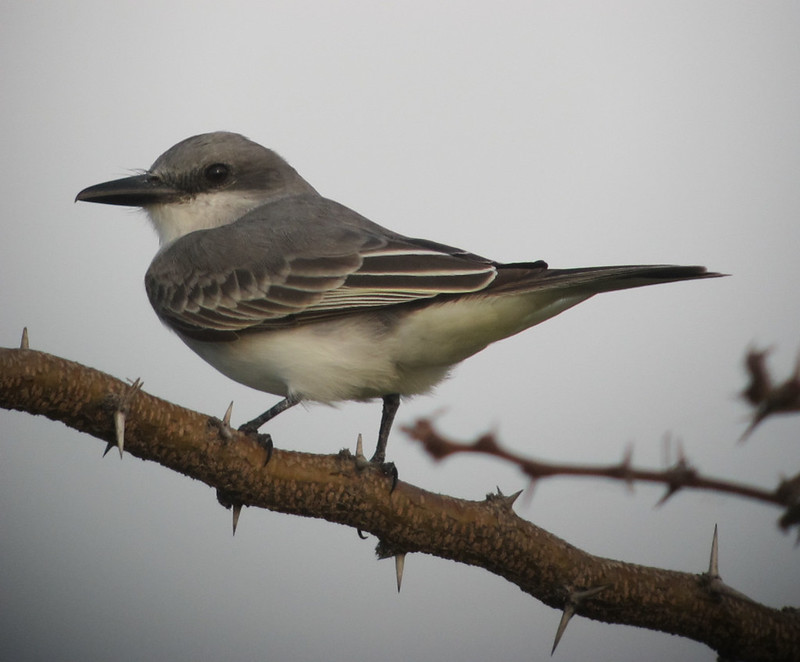 Two days ago my wife said, “Look out the window – see that bird?”

I did, and saw a bird sitting on top of one of the Gliricidia posts I stuck into the ground as part of the hedge I am planting around our property. Gliricidia roots easily in moist soil, so we’ve been putting in posts with the arrival of the rainy season so we get maximum rooting and strong posts by the end of the year.

“The kids and I looked through a nature guide – we think it’s a Grey Kingbird. He has a mate – they’ve been catching insects in the garden.”

As I watched, the little bird darted his head back and forth, watching every angle of the garden. Then, with a swoop, he darted into the garden and nabbed something, then returned to his post.

“They were doing that all day yesterday while we were working on school out at the sitting area,” Rachel said. “I think you made them the perfect place to sit.”

Apparently I did. By adding an extra layer to the gardens – my posts – I had inadvertently invited in some free pest control.

According to the Audubon Society, the Grey Kingbird:

“Forages by watching from an exposed perch and then flying out to catch insects in the air. May also hover and take insects or other items from foliage, and sometimes catches prey just above (or at) the surface of the water.

And its diet is:

“Mostly insects, some berries. Feeds on a variety of insects, including beetles, wasps, bees, and many others, with some as large as dragonflies. Also eats small lizards, and has been seen catching hummingbirds in the Caribbean. At some seasons, berries and small fruits may be more than one-fifth of the diet.”

I’ve seen them eating moths and large grasshoppers already. What a cool thing!

The permaculture idea of interweaving species of plants at various layers continues to pay off.

The Milkweed Bug
Bluebird nest success!
Pollinator Plants
5 Ways to Kill all the Bugs in Your Garden
More Scrubland Beauty