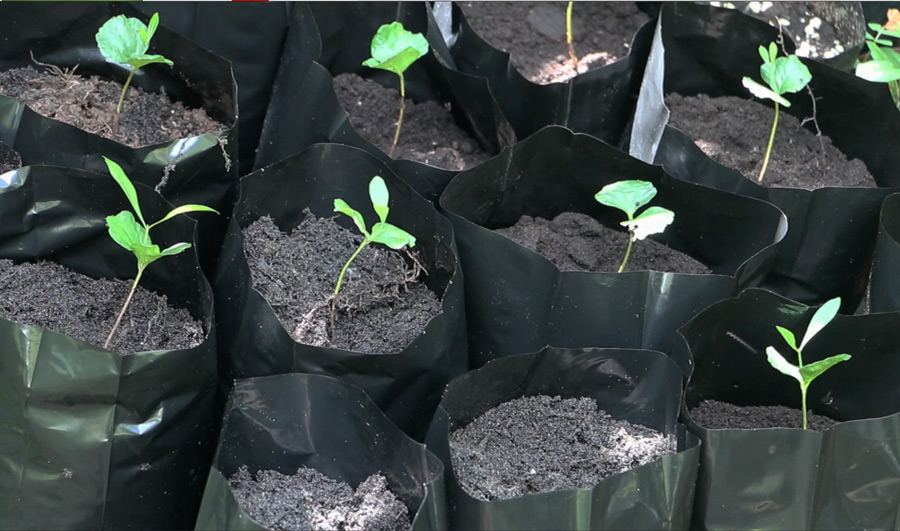 The following is an except from my new book The Easy Way to Start a Home-Based Plant Nursery and Make Thousands in Your Spare Time. “If you’re anything like me, you already have a bunch of plants. Let’s face it: most people who want to start plant nurseries are serious horticultural addicts. You may love orchids or roses, fruit trees or camellias, bromeliads or ferns, hostas or caladiums. Guess what? All those plants are now resources for your new nursery.

When I started my nursery I already had a big plant collection. My main interest was in edible plants, so I was growing blackberries, mulberries, olives, various perennial greens, pomegranates, coffee, black pepper, hot peppers, grapes, and many other wonderful plants. My front yard was a food forest, and my back yard was where I grew most of my vegetables. In the past, I had propagated plants for myself when I wanted them. Now it was time to propagate in earnest.

If you don’t have a big plant collection, you’ll want to make sure you at least get some good “mother” plants to start with. I called my big plants my “mother” plants, because I was always using them for seeds, tubers, cuttings, or scions for grafting, depending on what they were. Some plants are very easy to start from cuttings. Most take some work. Others won’t start at all from cuttings and need to be started from seed, by division, air layering, or some other method.

Most of my propagation was from seeds or cuttings. The American Horticultural Society released a book titled Plant Propagation: The Fully Illustrated Plant-by-Plant Manual of Practical Techniques which I recommend. I’m also working on a plant propagation book of my own, so watch for that. Let’s look at cuttings.

I would spend a few hours now and again just using cuttings. We’d cut some stems, nip off most of the leaves, dip the bottoms in rooting hormone, and then stick them in trays to go in the greenhouse or mist house. Some plants, like sugarcane, cassava, and chaya, could just be stuck in pots, and they’d root with no special care. Most needed higher humidity or regular watering to take. No plant seems to like rooting in full sun. Remember, cuttings don’t have roots yet. They can’t get the water they need, so make sure you’re propagating in the shade and not letting them dry out. If you place them in the sun, they’ll die. Making a little humidity tent is a good idea. I have rooted cuttings by sticking a bunch of them in a few pots, putting those pots in a white trash bag so some light can come through, putting a stick or two in some of the pots to hold the bag up, then closing it and leaving it in the shade for a few weeks until the cuttings root. It doesn’t have to cost a fortune, and you don’t need any special infrastructure.

That said, having a mist house is really nice. If you have a small greenhouse with a bench or two for cuttings, hang some mist heads over the cuttings on a timer. Sometimes people have them mist for a few seconds every ten minutes or so. I bought a timer at Lowes that only allowed half-hour intervals, and that was good enough. The regular misting kept mold from growing on the leaves and seemed to stimulate root growth as well. I would start my cuttings in trays of perlite under mist, and I had better success than with any other method. It worked even on tough-to-propagate plants. Once you get started and are making some money, it’s good to add a mist house. Because the cuttings never dry out, they do very well at rooting. No stress!

You can also use a mist house to start seeds, though it’s not really necessary if you have irrigation or a watering can. Most of my seed-growing was done right in the pots I later took to market. If I could avoid the extra step of transplanting, I did. I didn’t do a lot of seed-growing, however, with the notable exception of pawpaw trees (Asimina triloba). Pawpaws were always a hit, as a native North American tree that grows from North Florida up toward Canada. It also grows in the shade and bears delicious fruit, so it was an easy sell. The problem with pawpaws is that they won’t start from cuttings and the seeds don’t keep. They also make deep roots, so I grew them in special, extra-deep pots. To grow pawpaws, I would buy fresh seed in the fall from eBay. You need really fresh seed, too. When it comes out of the fruit, it needs to be put right into some peat or potting soil and stored in the fridge. If the seeds dry out, they die. I would get the seeds from eBay, put them in the fridge through the winter, then plant them in pots in the spring. The cold of the fridge “stratifies” them. Without that period of cold, they won’t grow. They’re like little timers that count the hours of cold. Once they get enough and get planted, they start counting the hours of warmth and then come up. At least, that’s how it was explained to me. I have had good luck starting them from seed this way, and I always sold out.

Another tree I started from seed was moringa. It’s a very popular medicinal tree that can be grown as an annual up north. They will propagate from cuttings, but seeds grow very fast and stronger than cuttings, so I used seeds. I also started native persimmons and soap nuts from seed, as well as hot peppers. If you’re going to be selling at the spring plant shows, it helps to have a warm spot and a heat mat to get seeds germinating in late winter. Otherwise, you’ll miss a sales window.

I mentioned how I like to keep mother plants in my yard from which I can propagate. It’s a great idea to pack your yard with plants that you can use for propagation later. If you get something cool at a plant show, plant it in your yard and take care of it. The next year, you should be able to use it for propagation stock. I had all kinds of cool plants in my yard and never ran out of material I could propagate. I also kept some tender plants in pots. I bought a Coffea arabica (coffee) plant one year at a rare plant show. When it bloomed and fruited a year later, I got a handful of beans. Instead of roasting them for coffee, I planted them all and got maybe 25 little coffee trees for my effort. A little while later, I had them all sold at $6 each. They were little when I sold them too! Just a few leaves, but people loved the idea of having a coffee plant of their own, so they sold like hotcakes. The next year I got more beans from that tree. Maybe fifty or more. Again, I planted them and sold them all. That’s $450 of almost pure profit in two years from one mother plant. When a tour came through my yard, people would look at the coffee tree and say, “Wow! Do you roast your own coffee?” I would laugh and say I couldn’t afford to. A handful of beans off that tree were worth a couple hundred bucks in profit! Forget Blue Mountain Coffee. My coffee was like 24-carat Gold Mountain Coffee!

Another option with which I did well was buying bare-root trees from various sources in winter and potting them. This is a great option for fruit, nut, and some ornamental deciduous trees. You can get bare-root trees wholesale for a few dollars each, plant them in pots, and then when they leaf out and root up in the spring, you can sell them for five times what you paid. I even bought bundles of rare bare-root trees like Chinese chestnut and witch hazel off eBay. You will get ripped off on eBay sometimes, so buyer beware. Look for people with good ratings who aren’t overseas. Avoid anything coming in from abroad. The scams are numerous. It’s better to find local suppliers if you can, but I took some chances with buying bare-root trees from elsewhere and did well. Once you know you have a good supply, stick to it. It strikes me that some of you might not know how bare-root trees work, and it’s actually really cool. When many species go dormant and leafless in winter, you can dig them right out of the ground, mercilessly pruning away roots to next to nothing, then plant them elsewhere. In spring, they wake up, grow new leaves and roots and hardly seem to notice they were moved. I once did it with a bunch of peach trees I started from pits in a flat. I had set the flat near my greenhouse one day in spring, intending to get around to potting the trees. Instead, I left it there for a few months, and the little trees grew right into the ground in a big mess of green, crowding and fighting and reaching for the sky. That winter when they were just sticks, I dug the whole mess of them up, cutting away tangled roots and basically yanking some of them from the ground. I potted some and planted others, and, to the best of my knowledge, every little peach tree survived. It was amazing.

Bare-root trees are pulled during the winter or early spring. The roots are wrapped in wet paper toweling, some dirt or moisture gel, and then the trees are shipped or delivered. Once you pot them and the weather warms, it’s as if they don’t know they were transplanted…”

Excerpt from The Easy Way to Start a Home-Based Plant Nursery. Now available for pre-order on Amazon.

Rice Terraces of the Philippines

[…] a free excerpt from my new book on propagating plants via seed, cutting and bare-root […]

Where did you buy wholesale bareroot trees from?