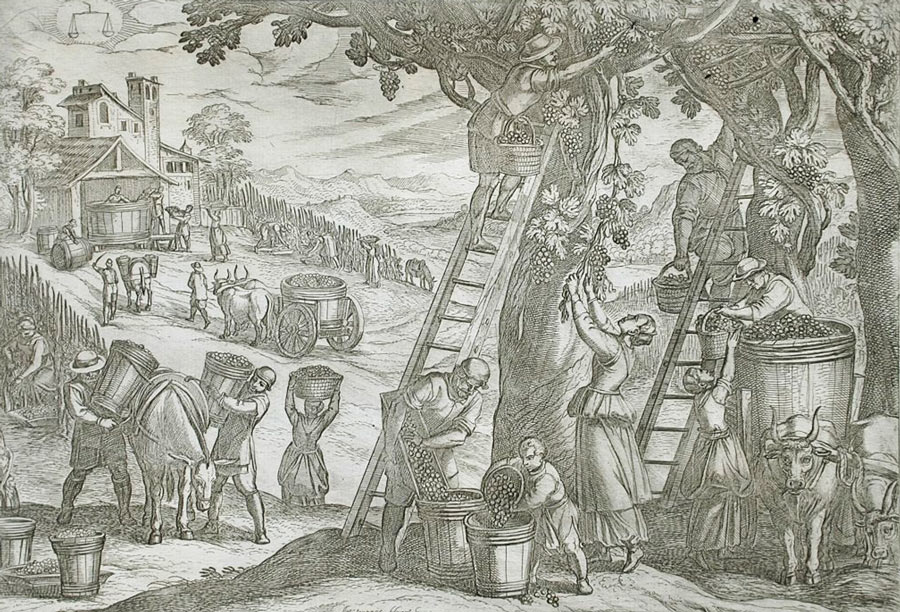 In my last post I looked at growing grapevines on individual posts. Today we continue looking at alternate methods of growing grapes with a special focus on the “married vine.”

First, however, Hilary shares some photos from the Eden Project in Cornwall:

“Following your recent thoughts on grape vines, here’s a couple of photos I took at the Eden Project in Cornwall. They grow grapes at bush size, growing in a border and as something between a cordon and an espalier at close spacing. Not exactly what you wanted for the grocery rows, but fun to know about!” 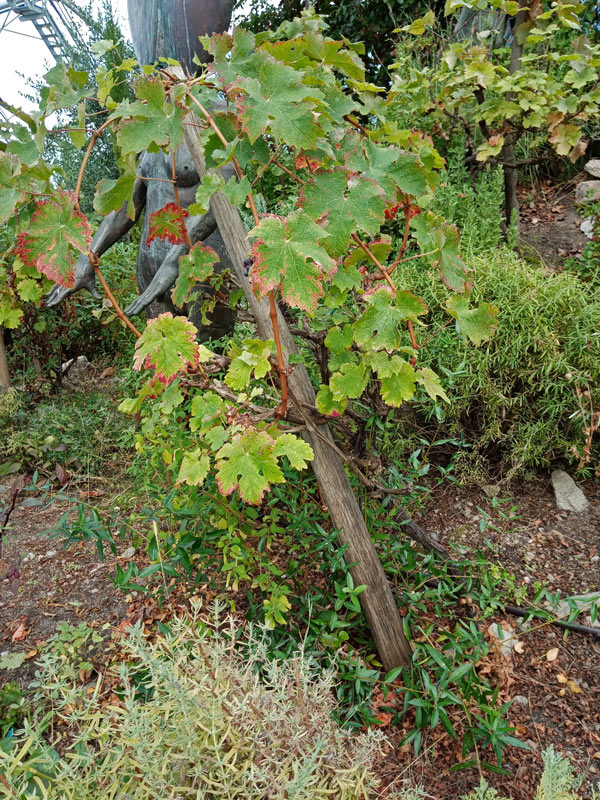 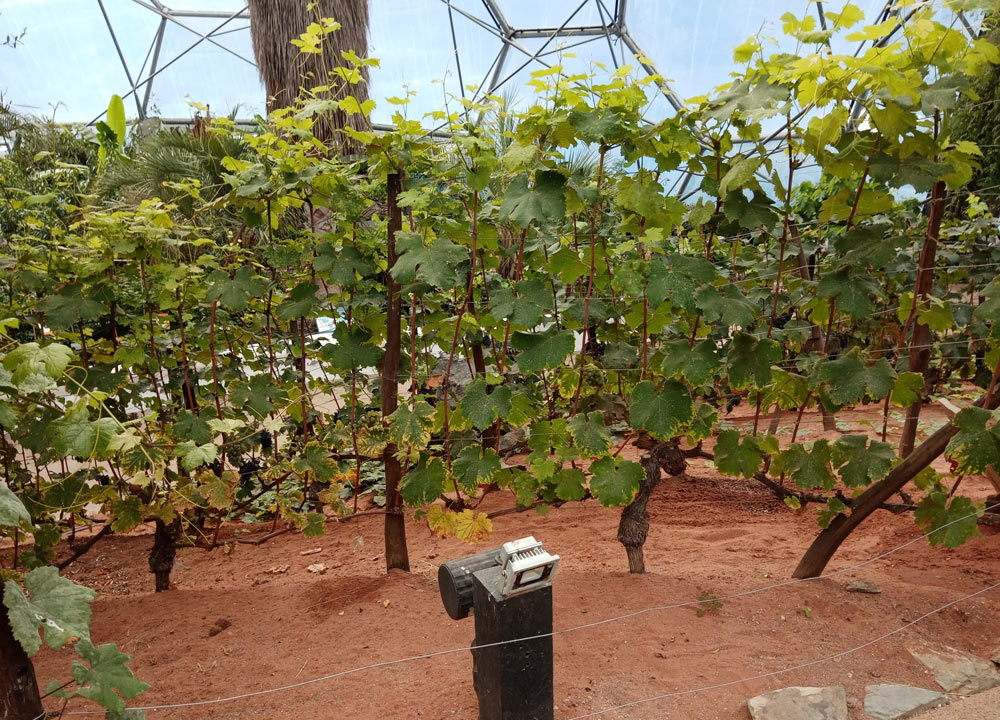 Something that strikes me repeatedly as I practice gardening is how very many ways there are to grow food and cultivate plants.

As soon as you think you’ve found “the right method,” you find another one that seems better. At my last property I built a small vineyard with power poles and wire. It’s the “proper” single-row system often used in Florida muscadine production.

But it’s by no means the only method. It may not even be the best method, even though it’s common and easy to construct.

There are many methods that can be used. Like growing grape vines on trees!

Growing Grape Vines on Trees with the “Married Vine” Method

“The Etruscans were the first winegrowers in Italy, beginning from the wild varieties.

The wild grapevine is a local plant in the Mediterranean area. In the more ancient times, people began to gather its fruits in the woods.

The wild vine (Vitis vinifera sylvestris) is a native species of the Mediterranean area and, above all, in Italy, it finds its ideal conditions. Even today, it is possible to find wild vines in our woods (even if you have to make attention to distinguish them from vines became wild, from old abandoned vineyards). The varieties we cultivate today derive from the wild vine, modified through millennia by selections and crossings carried out by man.

Returning to the Etruscans, scholars hypothesize that they cultivated the vine since the Bronze Age, however at least from the twelfth century B.C.

Later, with the development of civilization, being great navigators and merchants, they had increasingly intense contacts with the peoples of the eastern Mediterranean (especially with the Greeks), where culture and viticulture techniques were already more evolved. This allowed them to refine production techniques, to import new tools and new practices of working. New oriental vine varieties were also imported (whose process of domestication began in a much more remote era in the Caucasus area). These new vines were cultivated and crossed with local varieties too.

Thanks to these influences, the primitive Etruscan viticulture grew and grew over the centuries, and wine production increased in quantity and quality. So, from the 6th century B.C., began also the overseas trade (which we will discuss later).

The Etruscans cultivated vines in the same manner they saw these plants grow wild in the woods. The vine is a climbing shrub, a species of liana. In a wood, its natural environment in our latitudes, it tends to climb up a tree to reach the light as possible (it is very heliophilous specie). However, it is not a parasite: the vine does not weaken the tree on which it clings.

Today the Etruscan cultivation system name is “married vine”, “vite maritata” in Italian. The vine is like “married” to the tree. This definition is not Etruscan but was born later, as we will see. The Etruscan word was “àitason”.

I highly recommend reading the entire post, which is replete with illustrations and paintings of the method of growing grape vines on trees.

I have not incorporated grapevines into my food forest systems yet, as they are often too vigorous for young trees, and I keep moving before the system gets big enough to handle them. However, our current property has a wide variety of trees of various sizes which we could use for viticulture experiments. In fact, there is a row of popcorn trees along the driveway. Wouldn’t it be interesting if they worked? Their allelopathic tendencies might be bad for grapes, but who knows?

I also have a young pecan tree, some black cherries, some sweet gums and even a black walnut that might work as supports for grape vines.

In the past I have experimented with pollarding a sweetgum tree as a support for climbing yams. Why not grapes?

I was so thrilled when I saw that it was my people , the Etruscans, that first started growing vines! My Italian side of the family is of Etruscan Lineage. This was absolutely great news to me, because I have always detested the Romans and did not like , thinking at the time that I descended from them, that I might share DNA with them! Turns out that when the Etruscans were conquered by the Romans because they beastly worriers, where obviously , the Etruscans were lovers of culture and science, they conquered and took our technology such as our aqueducts and took credit it for it! While they were responsible in taking the aqueducts and bath, etc and spreading through their conquered lands , it was at the price of human slavery that they took during their many wars, etc. Thank you for adding to my familial history. Etruscans have long been forgotten by many but its worth reading up on them because they really were the first to give us many things among them art, statue, poetry…many of them fled the territory known as Tuscany today up to Via Veneto , as to avoid capture and enslavement by the Romans when they were conquered. My own family resided since 1700’s in Annone Veneto and I found family there many still having original lands left to them via generations of Pippo.
Please keep posting in you tube community when you have new articles, I forget to check and many times dont look at my email. One last thing. I think that grapes going up moringa, might protect, in a symbiosis collaboration, the moringa from winter frost ? Im going to try it here in Vegas. Be Blessed David and hope you do more grapevine growing.
Nancy Pippo Ruggeri aka DesertEden Blooms

Thanks for all that info Dave. I’m going to try that on my concord grapes. I have both domestic and wild concords, which is both smaller and extra sweet and intense flavor. Hoping crossover some of those traits into my domestic.