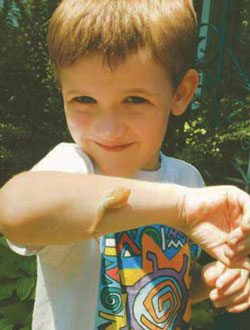 The rosy wolf snail may be more famous than I first thought. The other day my oldest son brought me a 2007 issue of Highlights magazine he’d been given in a box of books. In it was an article on snails he thought I’d enjoy – and that perhaps I’d like to post here.

After reading it through, I looked the piece up and was pleased to see it had also been posted online.

I think you’ll enjoy it too:

Some things about Nathan’s pet snails seemed strange right from the start.

First, they were fast. They could travel the length of Nathan’s forearm—from his thumb to his elbow—before he could say their names: Soldier and Ephenie.

Second, they were big. With bodies fully extended from their narrow tube-like shells, these snails stretched as long as Nathan’s index finger.

The garden snails he usually found were about the size of his thumbnail.

And finally, Nathan’s pet snails weren’t much interested in lettuce or other green leaves, the usual snail food.

By the time Nathan decided to investigate, he had adopted his fourth snail. He took Soldier III in a plastic container with dirt, leaves, and a water dish to the Mississippi Museum of Natural Science.

There, he showed the snail to Dr. Bob Jones, the curator of invertebrates. Invertebrates are animals with no backbones, including snails. Dr. Jones said Soldier was a rosy wolfsnail. He was a predatory snail, which means a snail that eats animals —in this case, other snails or slugs.

“Rosy wolfsnails are native to the Southeast region,” Dr. Jones told Nathan. “They’re great to have in your garden because they keep the other snail and slug populations down. (Keep reading)

The rosy wolf snail is the same species I wrote about back in January.

It’s amazing what you can discover in your backyard.

It’s also nice to have kids that get excited about nature enough to share their discoveries – and the occasional article – with their dad.

In case you haven’t seen it: Permaculture Paradise at Val and Eli’s