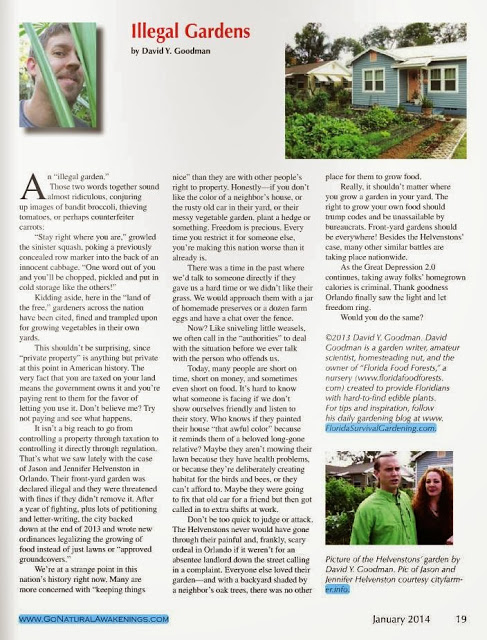 The Helvenston family and their illegal garden.

“Stay right where you are,” growled the sinister squash, poking a previously concealed row marker into the back of an innocent cabbage. “One word out of you and you’ll be chopped, pickled and put in cold storage like the others!”

Here in the “land of the free,” gardeners across the nation have been cited, fined and trampled upon for growing vegetables in their own yards.

This shouldn’t be surprising, since “private property” is anything but private at this point in American history. The very fact that you are taxed on your land means the government owns it and you’re paying rent to them for the favor of letting you use it. Don’t believe me? Try not paying and see what happens.

It’s not a big reach to go from controlling a property through taxation to controlling it directly through regulation. That’s what we saw lately with the case of Jason and Jennifer Helvenston in Orlando. Their front-yard garden was declared illegal and they were threatened with fines if they didn’t remove it. After a year of fighting, plus lots of petitioning and letter-writing, the city backed down just this last month and wrote new ordinances legalizing the growing of food instead of just lawns or “approved groundcovers.”

We’re at a strange point in this nation’s history right now. Many are more concerned with “keeping things nice” than they are with other people’s right to property. Honestly – if you don’t like the color of a neighbor’s house or the rusty old car in their yard or their messy vegetable garden, plant a hedge or something. Freedom is precious. Every time you restrict it for someone else, you’re making this nation worse than it already is.

There was a time in the past where we’d talk to someone directly if they gave us a hard time or we didn’t like their grass. You might approach them with a jar of homemade preserves or a dozen farm eggs and have a chat over the fence.

Now? Like sniveling little weasels, we often call in the “authorities” to deal with the situation before we ever talk with the person that offends us.

A lot of people are short on time, short on money and sometimes even short on food. It’s hard to know what someone is facing if we don’t show ourselves friendly and listen to their story. Who knows if they painted their house “that AWFUL color” because it reminds them of a beloved long-gone relative? Maybe they aren’t mowing their lawn because they have health problems – or because they’re deliberately creating habitat for the birds and bees? Maybe they were going to fix that old car for a friend but then got called in to extra shifts at work?

Don’t be too quick to judge or attack. The Helvenstons never would have gone through their painful (and frankly scary) ordeal in Orlando if it weren’t for an absentee landlord down the street calling in a complaint. Everyone else loved their garden – and with a backyard shaded by a neighbor’s oak trees, there was no other place for them to grow food.

Really, it shouldn’t matter where you grow a garden in your yard. The right to grow your own food should trump codes and be unassailable by bureaucrats. Front-yard gardens should be everywhere!

Would you do the same?

The Rice Paddies of Bali

A Quick Tour Through the Gardens

For those who agree to live in an HOA, they are agreeing to have a third party say what they can and cannot do on "their" property. One of the reasons I don't live in one. It's actually the mortgage companies' property at least until property owners pay it off.

Yes – you're right on both points.