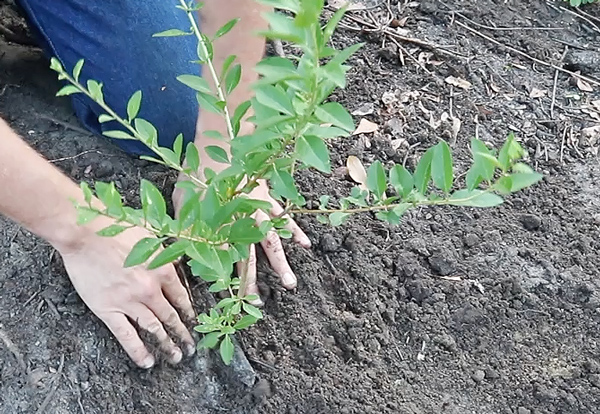 Earlier this week I started planting a new food forest in Alabama. Though my land is rented, we really have no idea how long we’ll be here, so why not plant?

Heck, I planted a food forest on the land I own in the Caribbean, not knowing I would be leaving it the next year. This is par for the course.

But wandering aside, the new Alabama Food Forest Project will be an interesting one for multiple reasons.

First, it’s colder than my previous projects by a half-zone. We’re not going to be able to do much with tropicals and will have to focus on temperate species.

Second, we’re starting this project in an already wooded area instead of on a lawn. There is already a lot of fungi and organic matter in the soil, which should be good for young trees.

You can see the beginning of the project in this video, which is too long and rambly, but people still seem to like it:

Yesterday my brother Brian the Firefighter and I cleared a much bigger chunk of the area. The soil looks better than the soil in the garden, so hopefully the trees and plants we add will thrive.

The canopy trees I’m planning include pecan, chestnut, mulberry and pear. Understory should be apples, peaches, goji berries, blueberries, blackberries, smaller mulberries, cassava and chaya. Nitrogen fixers include mimosa, black locust, Leucaena and Enterolobium and coral bean (if I can get some of the latter two). As I propagate T. diversifolia, I’ll plant them all around as well. The ground cover should be mostly pumpkins and sweet potatoes for starters.

I may get a weed torch to control the return of the many Smilax plants from below – this area was loaded with vines and I have the scrapes on my arms to prove it. Torching them seems easier than trying to dig them all up. Digging is a nightmare with how many trees roots are in the ground. It’s like trying to dig through woven baskets.

Unlike the grocery row gardens I’m building, this food forest will have more of a flowing, natural feel. I’m making it with what I call the “island method,” planting scattered tree guilds with paths in between. It should really take shape over the next few months. We have a lot of tree waiting to be planted – and plenty of seeds, too!

My parents in their food forest
Creating a Food Forest in North Florida
South Florida Food Forest Species: Yes or No on These?
Look at Our Big Coconut Palm!
Planting Corn and Nitrogen-Fixing Trees Together

SO EXCITED! Just wanna say… I live in the FL panhandle, and you moving to AL makes me psyched to see what you’re up to, because now I don’t have to throw out all the “this only works in south FL” ideas. Everything that works where you are, pretty much works here. And we have a hurricane-ravaged two acres we’re in the process of trying to re-plant with useful trees, shrubs, etc. that will be more beneficial and productive (and hopefully wind-resistant) than the crap planted pines that were here before. Eager to see how your efforts turn out…

David (and anyone turning up to read comments here!)

Been watching the Green Cover Seeds webinars going up over the last few weeks. This one I found especially interesting. Okay, let me correct myself, I found several especially interesting, this just the latest:
https://www.youtube.com/watch?v=dr0y_EEKO9o
The Nitrogen Solution, Dr. Christine Jones.

The TLDR is diversity of plant families is the most important factor in maintaining soil health. At 4 plant family groups, a test in Ireland showed all nitrogen inputs were unnecessary and the quality of crops was better. This is a refinement of what Gabe Brown(?) did with diversity of species. Diversity is good, but diversity of plant family groups matters more than simple species diversity. So, interplanting (as is already the norm in the food forest practitioners) is the new best practice, at least in situations that allow for it. On large scales the tech will have to improve. Companion plantings may have some utility, though it’s probably not species based. And an interesting side note is following this practice legumes are unnecessary. They may be one of the groups, they do not need to be. Nitrogen is fixed in the system without root nodules and transferred in the form of amino acids, which is superior to simply dumping inorganic nitrogen usually left behind by decomposition.

Also, the more recent research is showing fungi diversity and density a very important factor. (The diversity of plant groups encourages this too.) Fungi are apparently an important (maybe critical) expressway for nutrients. The plant communities can share nutrients via the fungal networks in the form of amino acids. Transferring amino acids is far more efficient than transferring more basic compounds.

The webinars, and the follow up Q&A are recommended for anyone interested in the latest in soil science. Links to papers and other studies are provided in the posts of the videos too.

Ok, I am now officially turned into a soil geek :p

What about “seeding” mushroom on the food forest floor? What are your thoughts on King Straphoria or other ground covering mushrooms?