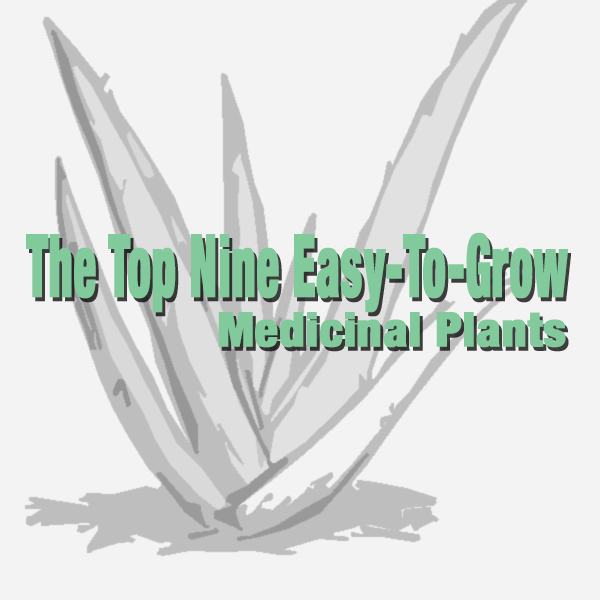 Medicinal plants have been used throughout human history, long before drug companies became the main source of medicine. People young and old swear by their healing powers. From Greek physicians to essential-oil loving moms, these nine plants have filled history. Better still, they are easy to grow in your home garden. Aloe is one of the oldest plants that was used in traditional medicine, dating back to the Ancient Chinese and Egyptians. It is rumored that both Alexander the Great and Cleopatra used it.*

Aloe is a super easy to grow succulent. It can tolerate heat and frost. Plant in full sun with good drainage. They cannot take freezing, however, so if you are in a temperate climate, grow aloes in pots so you can protect them during the winter. Most hippies and survivalists have heard of moringa. This superfood is so amazing that it is sometimes called the Miracle Tree.

Moringa is super easy to grow. My dad wrote about how to grow and take care of it here. In the 13th century and 14th century, one could buy a sheep by paying with one pound of ginger.**  This shows the high esteem in which our ancestors held this valuable medicinal herb.

Ginger is very easy to grow. You can get ginger root from grocery stores, and simply plant it in a shady area in your garden, so long as you live in zone 7 or higher. Don’t bury the root more than an inch. You can read more on growing grocery store ginger in this post.

Medicinal Uses: Ginger helps get rid of sea sickness, nausea and morning sickness.  According to HealthLine, it can lower blood sugar levels. Ginger also contains a substance called 6-gingerol, which may have protective effects against cancer. Studies suggest that ginger can protect against age-related damage to the brain. Chamomile is one of my favorites of these nine plants, as it resembles a tiny Daisy. It is a lovely little herb in the aster family which has been used in traditional medicine and teas since at least Roman times.

Medicinal Uses: According to Health Line, “Chamomile tea is loaded with antioxidants that may play a role in lowering your risk of several diseases, including heart disease and cancer.

Chamomile has properties that may aid sleep and digestion, as well. Chamomile tea may protect against diarrhea, stomach ulcers, nausea and gas, likely due to its anti-inflammatory effects.” Imagine a world without peppermint. No Bengay, mint chewing gum, mint chocolate chip ice cream or peppermint candy. And worst of all, Peppermint Patty would no longer exist.

Peppermint is a crawling perennial, well known for escaping garden borders. It can be started from cuttings, or bought at a nursery. Peppermint likes full sun and loamy soil.

Medicinal Uses:  When I have back aches after doing gymnastics, the peppermint in Bengay soothes the muscles. Taste Of Home says that peppermint oil also cures headaches, coughs, colds, bloating, stomach problems, nausea and muscle pain. Tumeric looks very similar to ginger. In fact, it is in the same family. Every cook knows that tumeric can be used for dye. It is also commonly used in Indian cooking.

Tumeric, like ginger, is easy top grow. Here is some good information on growing it.

Medicinal Uses: Web MD says that turmeric is commonly used for conditions involving pain and inflammation. It is also used for hay fever, depression, high cholesterol, a type of liver disease, and itching. Some people use turmeric for heartburn, thinking and memory skills, inflammatory bowel disease, stress, and many other conditions, but there no good scientific evidence to support these uses. Echinacea is another of my favorite herbs, as well as being a beautiful flower. Yes, it is also in the Daisy family. Which makes it amazing.

Echinacea can be grown from seed. They like full sun, and grow best with regular watering. They grow best from zones 3-9.

Medicinal Uses: Medical News Today says that echinacea can help with colds, coughs, upper respiratory infections, influenza, canker sores and ear infections. It can be found fresh or dried, in pills, as a juice and as an extract in capsules. When I think of lavender, I think of old ladies gardens, a sweet, soft smell, and a field of purple lavender. Lavender is a sweet, nostalgic little herb.

Lavender thrives in warm, well-drained soil, and full sun. Lavender grows from zone 5 to 9. They can be propagated from softwood cuttings, or planted by seed. Lavender is considered a short-lived perennial.

Medicinal Uses: According to Medical News Today, lavender oil is believed to have antiseptic and anti-inflammatory properties, which can help to heal minor burns and bug bites. It may be useful for treating anxiety, depression, and restlessness.

Some studies suggest that consuming lavender as a tea can help digestive problems such as vomiting, nausea, intestinal gas, upset stomach, and abdominal swelling.

In addition to helping with digestive problems, lavender is used to help relieve pain from headaches, sprains, toothaches, and sores. It can also be used to prevent hair loss.

Lavender oil can be bought here. Few people nowadays know how important rosemary was to the ancients. The Greeks, Romans and Egyptians considered it sacred.  In ancient times it was thought to strengthen memory. In literature and folklore it was an emblem of remembrance and fidelity. Nowadays this little plant holds its own in the culinary world. But it still is very useful as a medicinal plant.

Rosemary is easy to grow. It can be bought at most nurseries. It is a perennial shrub, and likes full sun. It grows from zone 9 to zone 11.

Medicinal Uses: According to Medical News Today, rosemary is a rich source of antioxidants and anti-inflammatory compounds, which are thought to help boost the immune system and improve blood circulation. Rosemary is used to help treat indigestion. Scientists have found that rosemary may also be good for your brain. It also helps slow down cancer cells.

Rosemary oil can even be bought on Amazon.

As you can see, medicinal plants are really useful. Maybe even more useful than poisonous plants.

This article is so great, thank you! I have some rosemary, but I forgot how it is supposed to help memory…perhaps I should move it closer, so it is in my path each day! The drawings are just wonderful too, well done, thank you. I so enjoy reading and looking : ) God bless you, thank you.

Hi Elizabeth! Thanks so much for the encouragement! God bless you too.

Daisy The Good, wonderful article. The drawings are superb!

What a detailed and informative article. Thank you.

This article not only inspired me to plant some moringa and echinacea seeds, but to also get outside and make some sketches of my plant friends. Thank you for the inspiration, Daisy!

I grow all of those except moringa. Now I have to figure out how to grow moringa in nj! Thanks for the great article. Keep em coming

I’ve been thinking about putting in an herb garden, this list definitely inspired me to get one going.

This is some really great info, thank you!

Leave a Reply to Daisy The Good Cancel Reply