Home Announcements No, There Are No Blue Watermelons! Avoid Seed Hoaxers!
AnnouncementsSeeds 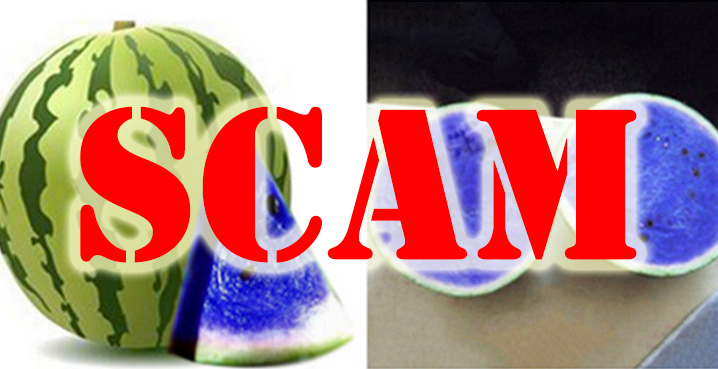 A reader wrote me this last week sharing a site that sold blue watermelon seeds.

These watermelons are a long-time internet hoax, yet seed scammers are still taking advantage of gardeners and their love for interesting varieties.

On ebay right now are listings for blue watermelon seeds: Note where these so-called “blue watermelon” seeds are coming from.

But you can bet that’s where the money is flowing from. Out of a gardener’s pocket and into the pocket of a scammer.

When you buy seeds from overseas, your chances of being scammed are much, much higher. How do you know that you’re going to get what you order?

And how will you take recourse if you plant the seeds and get something different than advertised? Or if they don’t come up at all?

Caveat emptor is the phrase of the eon when you’re dealing with overseas seeds. Of course, if you fall for something like this:

Here’s another batch of bizarre seeds, this time in the world of flowers: Seeds for a RAINBOW ROSE!

OMGOMGOMG I NEED IT! Some of these seed offerings are believable, and some of them aren’t. You might have an ad for “heirloom tomatoes” which still isn’t heirloom tomatoes. Watch for those as well. If it looks too weird to be true, avoid it. And if it’s coming from China, avoid it.

The Chinese are well-known for scamming.

They have elaborate dating scams:

The authors of the study analyzed more than 500,000 profiles, drawn from Jiayuan’s 100 million users, which the site’s employees had flagged as scam accounts. And while by far the most popular of these scams — fake profiles promoting escort services — will be familiar to anyone who uses Tinder in the U.S., the remaining scams could be drawn straight from The Sting or The Grifters.

The most ingenious of the Jiayuan scams starts when the owner of a fancy restaurant hires an attractive woman, who then makes a dating profile. The woman then contacts a lonely heart over Jiayuan and convinces him to take her on a date to the expensive restaurant, where she runs up an enormous tab. According to the study, these dates can cost anywhere from $100 to $2,000. Afterward, of course, the bilked bachelor never hears from his date again.”

And who could forget Chinese drywall?

“When Kevin and Candace Thaxton’s 10-year-old pug Chansey got sick late last year, the couple assumed at first it was simply old age. The small dog started showing symptoms of kidney failure — drinking water excessively and urinating in the house. By the time the Thaxtons got her to a veterinarian, Chansey’s kidneys had shut down and she was in extreme pain. She died two days later.

“It was so hard. It was just devastating,” Kevin Thaxton told ABC News.

But the Thaxtons would go through the ordeal again just weeks later — leading them to a new theory behind Chansey’s death — when their new Pekingese-mix puppy Penny exhibited the same symptoms, finally resulting in kidney failure. When Candace Thaxton stumbled on a Food and Drug Administration warning that there’d been an increase in complaints about chicken jerky dog treats made in China, she says she knew immediately what had happened to her beloved dogs.

“I grabbed the bag of treats and turned it over,” Candace said. “At first I saw it said ‘Manufactured in South Carolina’ so I thought I was safe. Then I looked harder and it said ‘Made in China’ and I just said ‘Oh no.’ “

Of course, it’s not just China. There are hoaxes coming from other places. Nigeria has a reputation for fraud which is legendary. Instead of a few bucks for seeds, they’re stealing people’s entire retirements:

“Spears, who is a nursing administrator and CPR teacher, said she mortgaged the house and took a lien out on the family car, and ran through her husband’s retirement account.

“The retirement he was dreaming of — cruising and going around and seeing America — is pretty much gone for him right now,” she said.

She estimates it will take two years to clear the debt that accumulated in the more than two years she spent sending money to con artists.

Her family and bank officials told her it was all a scam, she said, and begged her to stop, but she persisted because she became obsessed with getting paid.”

This is why I’ve buried all my retirement money in mayonnaise jars where no one can find it.

I understand the allure of blue watermelons and exotic seeds, but if it’s really out of the ordinary – and it’s coming from somewhere out of the ordinary – I can almost guarantee you’re going to get scammed. Fortunately, it’s not a huge loss – but every person who sends a couple of bucks to these thieves is just encouraging them.

If this sort of thing makes you mad, feel free to post this article on Facebook in various gardening groups. Also be sure to report nonsense on ebay when you see it.

I don’t like to see scammers making money or my readers losing it. Stick with good companies like Baker Creek for exotic seeds and just say NO to weirdos with weird-colored watermelons.

Will post soon
Just in Time for Christmas: The Best Gardening Books
Touring the Cocoa Orchard and my Appearance on WMNF
A New Year's Update
Garden Tour, March 2021
3 comments
PinterestWhatsappEmail

My Presentation Airs Today ONLY!

Yup. Luke from MIGardener did a video on this same subject back in August last year. He even bought some blue strawberry seeds just to see what he would get — if he even got anything at all.

And aren’t there restrictions on plants/seeds coming into the country from other countries? It seems like a person might run afoul of importation laws with some of these, if so.

Thank you – I’m watching that now. It’s very good. I filmed my own video yesterday and posted it this morning. I’m going to have to link his as well.

Reminds me of the square watermelons coming out of China, all the were doing was growing then in square acrylic (or something) boxes.