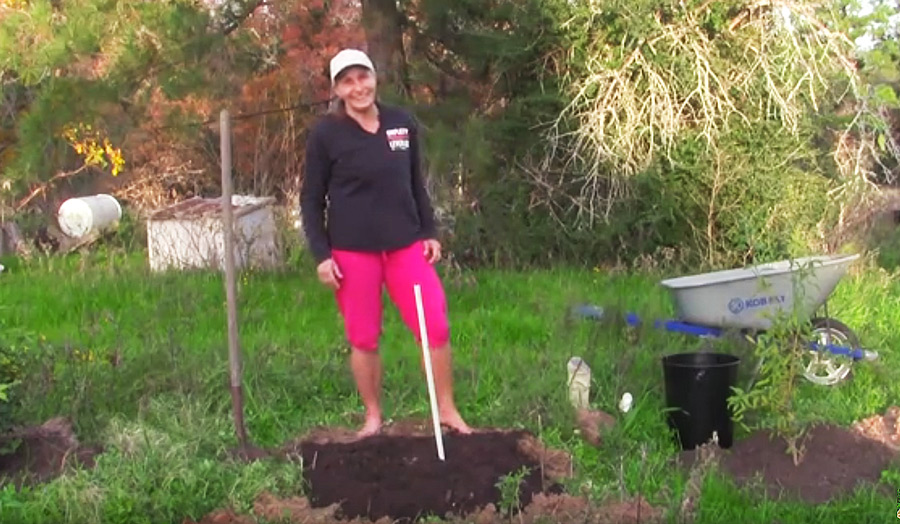 I recently joined Marjory Wildcraft on an “Ask Me Anything” podcast and one thing that came up was feeding chickens bugs. We tossed some good ideas around on that topic that you might find useful.
From the transcript:
David the Good: What I kind of found was taking all of the kitchen scraps and that kind of thing, and putting it, composting in the chicken run itself, so you’re actually getting bugs to show up there. If you make a big compost pile in one spot, and if you make it a little hard for the chickens to access, like they can jump up top, and they can kick around in it, but they can’t throw it all over the place. We’ve found kind of on accident that they would climb up inside of the bin that we made, which had some hardware cloth around it. They would jump up on top, and they would just wolf it down, whatever was in the compost pile, and turn it. They would dig down, and they would pull the worms out, the mealworms and the maggots, or whatever was inthere. No, not mealworms, black soldier flies. The stuff that was in there, they would come, and they would take it, but they couldn’t kick the compost all over. There was enough cover in that compost bin that the bugs could keep breeding in it, and the chickens could come and help themselves every day without taking out the entire bug population. Plus, we got compost at the end of it, and we had some free labor going on from the chickens. That’s my two cents. If you had a compost pile where they can actually hop in to the top of it, but they can’t throw the compost all over, because you know, if you throw kitchen scraps in the chicken run, they’re going to be spread 20 feet all over the place over the next few days, and the bugs are gone, because the birds will kill every single one.
Marjory: You know, another technique is that you get a pan full of water, and you put a light bulb above it at night. If you put the light bulb like a foot or two above the water, the insects are attracted to that light, and then they’ll fly and accidentally hit the water, and then, they get stuck there, right?
Jimerson: That’s brilliant.
David the Good: Oh, I love it. I love it. Great idea.
Marjory: Yeah. That does work, and I’ve seen it work better than others. It seems to work better in some situations than in other situations, like right outside my daughter’s window seemed to be ideal, interestingly enough. That was another one that I use. Yeah. You get a lot of the nighttime insects. Then, we had free range chickens, so they would just come by in the morning and eat it out of the water pan, so it wasn’t like I even had to feed it to them.
David the Good: Yeah. Anywhere where you have lots of leaf cover, if you have woods near the edge of where you put your chickens, and provided it’s woods where they’re not
going to get eaten by raccoons, because that’s always a problem when you have woods, but they’ll dig through all the leaf litter, and they’ll find tons of protein. We had some jungle fowl that we had here for a period of time, and I mean, they just ate bugs all
day. They would disappear into the jungle, eat bugs all day, and then come back at night. Most of the time, they’d come back.
Marjory: I bet those egg yolks were pretty orange, too. They would probably be gorgeous eggs, will all the Omega-3.
David the Good: Oh, they were awesome. Yes.
Marjory: Yeah. Yeah, they really are naturally jungle fowl, so they’re meant to eat insects. That’s their natural food. I’m trying to think, I know one idea that I’ve had is, for the past I don’t know how many years, I’ve been trying to grow green beans here in Texas. Usually,just by the time they’re really getting up to be good vines is when we’re switching from spring to summer. The plants are healthy, and I’ve got them irrigated, and they’re doing fine, but the main problem is everything else turns brown, and all of a sudden, my garden is a haven for grasshoppers. They love green beans. The grasshoppers just eat it up. I was thinking, “Well, someday, I should just grow a bunch of green beans to attract grasshoppers, for my chickens to eat the grasshoppers,” right?
Jimerson: There you go.
David the Good: Yeah, why not?
Marjory: [crosstalk 00:11:32] that. Yeah.
David the Good: You could always just get dry beans from the grocery store, throw them over a tilled area, let it grow up, and then when the grasshoppers come, release the chickens. Then, you have almost no input into it, at all.
Jimerson: Love it.
Marjory: Right? They’ll eat the green bean greens, too.
(Read the rest here.)

Grow or Die - now in paperback!
Happy Independence Day... and I accept a challenge!
The Survival Gardener Book of the Week #6: Push the Zone
Unauthorized.TV Update
Getting Started in Gardening for $0
0 comment
PinterestWhatsappEmail

Robert Kourik at the Summit!