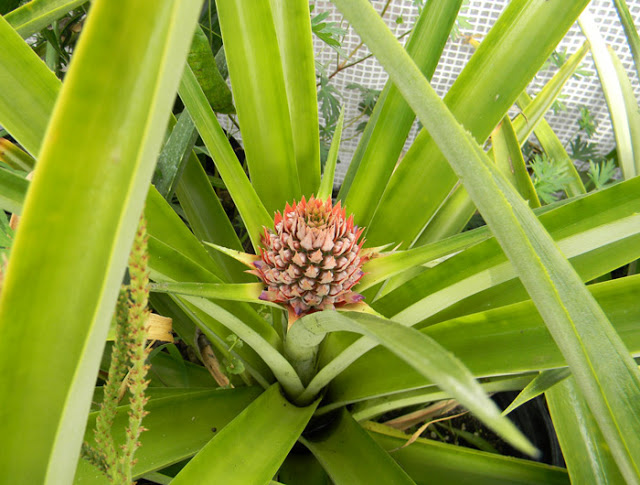 Did you know pineapples were once grown commercially in both the Netherlands and Britain?

“European pineapple cultivation was pioneered in the Netherlands. The early success of Dutch growers was a reflection of the trade monopoly the Netherlands enjoyed in the Caribbean in the form of the Dutch West India Company, established in 1621. As a result, plant stock could be imported directly from the West Indies in the form of seeds, suckers and crowns, from which the first plants were propagated.

Agnes Block is believed to be the first person to fruit a pineapple in Europe, on her estate at Vijerhof near Leiden. Many eminent Dutch growers joined the challenge, including Jan Commelin, at the Amsterdam Hortus botanical garden between 1688 and 1689, and Caspar Fagel at his seat De Leeuwenhorst in Noordwijkerhout. Pieter de la Court, a wealthy cloth merchant at Driehoek near Leiden, devised his own system for growing pineapples and many British gardeners were sent to his estate to learn about his cultivation techniques.

Dutch methods of pineapple growing became the blueprint for cultivation in Britain, undoubtedly endorsed after the Glorious Revolution of 1688 cemented Anglo-Dutch relations. William Bentinck, close adviser of William III, is thought to have shipped the entire stock of Caspar Fagel’s pineapple plants over to Hampton Court in 1692. The fruits were, however, ripened from this stock of mature plants and therefore did not count as British-grown pineapples. Pineapples had been ripened in this way before, as commemorated in Hendrik Danckerts’ painting of 1675 depicting Charles II being presented with a pineapple by John Rose, gardener to the Duchess of Cleveland. Danckerts’ painting led to the common misconception that Rose was the first to grow a pineapple in Britain.

The first reliable crop of pineapples in Britain was in fact achieved by a Dutch grower, Henry Telende, gardener to Matthew Decker, at his seat in Richmond between 1714 and 1716. Decker commissioned a painting in 1720 to celebrate this feat and this time the pineapple takes pride of place as the sole object of admiration. From this point on the craze for growing them developed into a full-blown pineapple mania. The list of gentlemen engaged in this rarefied horticultural activity reads like a who’s who of Georgian society and includes the poets William Cowper and Alexander Pope and the architect Lord Burlington…”

It’s a fascinating article. Even if you don’t have a Victorian hothouse, you can Push the Zone, especially with pineapples. They’re not hard at all.

Identifying Edible Air Potatoes in the Wild
Why Does this Terrify Me?
Another Squash Lover
Intensive Gardening Introduction
Square Foot Gardening: What is It and Does it Work?
6 comments
PinterestWhatsappEmail

Speaking of pushing the zone, I had a very odd thought(as if I had any other type), What if you took a low chill variety of apple, pear, or peach and put ice on the soil during winter, while it is dormant, and tried to trick the tree into thinking the appropriate chill hours were reached? This makes no sense to me (even though it is my thought). What say you David the Good? Should I just stop trying to think altogether, or maybe try to refined my thoughts, and move on; accept the fact that apples, pears, and peaches are just not going to well in my Sarasota area.

There are some kinds of peaches that are being grown successfully in Florida, and I believe as far south as Sarasota. As I recall, there are three kinds that require little to no chill hours. They’re even thinking of using peaches as a replacement for our doomed citrus industry.

Well, you have made my night. Thank you, now time to search the internet for these fabled, nuggets of peachy goodness.

I don’t think it will work, but there this books shares how you can trick apples into producing:

You might be able to grow Tropic Beauty peaches there, too. Not sure about pears.

Thank you, downloaded, and will put to use, I will keep track of progress and let you know.

I’d heard of the pineapple mania in Britain, but I didn’t know about its Dutch roots, thank you! I don’t know if you’ve heard of Bob Flowerdew, an organic guru over here in the UK – he’s also into pushing the zone and grows pineapples and other tropical goodies in Norfolk. He has various articles and interviews floating about online.