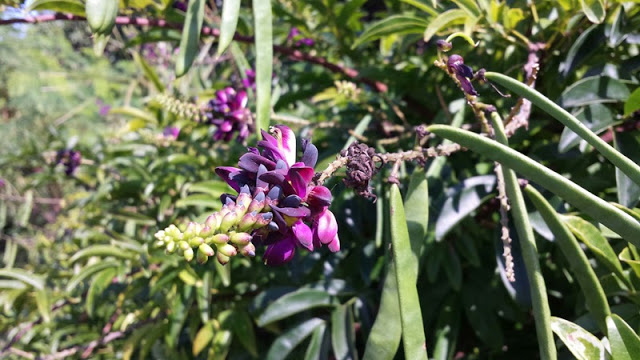 I found a mystery plant yesterday on Pine Island and took a few pictures. I’ve never come across this one.  I think it’s a vine rather than a bush.  It was mingled in with a firebush.  Do you have any idea what
this is?  I am hoping it’s edible, but I have my doubts now that I
realize it’s probably a vine.”
Along with her e-mail she attached three nice photos: By the flowers along with the pods, I know this is in the Fabaceae family, but after that, I’m winging it. My first guess is ground nut… but these vines look tougher than the ones I’ve seen online. My second guess is wisteria, but the flowers don’t seem as pendulous as those I’ve seen. Maybe tropical wisteria (Millettia taiwanensis)?
Can anyone nail down this plant for Sheila? If it’s ground nut (Apios americana), she’d probably be thrilled since she’s looking for edibles.UPDATE: I sent these photos to Green Deane last night. His response this morning:  “Definitely not…. NOT… ground nuts.”

Anyone know what this is?
Mystery squash!
Another plant that looks like marijuana
And another weird plant I can't track down
Can anyone ID this tree - solved: Carrotwood!

@The Prepper Project: How to Grow, Preserve, Harvest and Utilize Sweet Potatoes

Quick – someone tell me what this plant...

A Dixie Iris? Wait! That’s not a cattail!?

My brilliant readers: what is this mystery plant?

I just looked up Millettia taiwanensis and it's a perfect match! http://www.projectnoah.org/spottings/14921152
(hopefully the link works!). How exciting! Thank you David! I think I'll be able to sleep tonight!

I was going to say evergreen wisteria, Millettia reticulata, but only because I see it in nurseries all the time.

I have a couple of these plants purchased from the nursery. Yes, they are millettia taiwanensis, also in the pea family. In North Texas, mine is deciduous, it blooms in the summer and on perhaps. It is nicely fragrant. I would classify it as a understory bush, it creeps up nearby surfaces but also supports itself to some degree. They are 3'-5' tall and about the same width. They don't require much care, and mine are in a location that gets winter shade, just on the north side of the house under the eave.