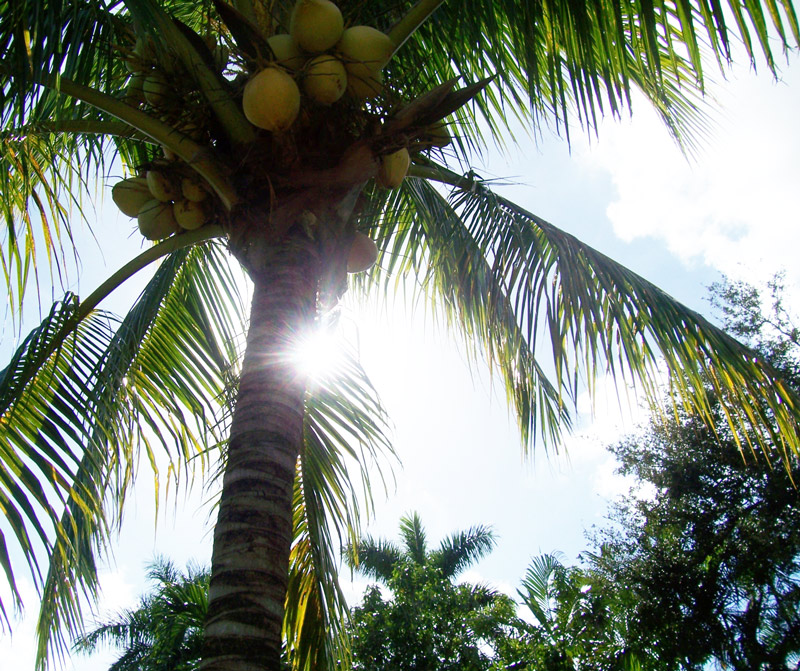 If you follow my YouTube channel, you probably saw the little video I did last week on planting a coconut.

For years I told myself I’d return to a tropical climate… one day… and plant coconuts.

A couple of days ago, I posted a picture of one of the many coconut palms on our new homestead on Instagram:

Coconuts on one of our trees. Love it. #gardening #horticulture #tropical #coconut #botany

If you live in a place where you can plant coconuts, I hope you’re planting some!

A pattern I saw again and again in South Florida was coconut palms growing in yards as ornamentals… with the coconuts rarely if ever being used.

Coconut water is good for you and refreshing, coconut milk is a great addition to your morning cereal or a curry stew and the coconut meat is wonderful shredded and added to desserts. Quite a few people in South Florida have told me they don’t use their coconuts because they’re “too much trouble to open.”

Yeah, I get that. We often aren’t even sure when to open them and we wait until they’re totally hard and brown before trying to hack into them with a screwdriver and a hammer.

Fortunately, all you really need are your teeth:

I dare you guys to try that at home.

Okay, let’s look more at planting a coconut with the intent of growing a coconut palm, since this isn’t really supposed to be a post on using coconuts.

In order to get a coconut to germinate, you need to first start with a mature nut that has milk inside. Once you plant that, it’s just a matter of waiting. Further directions for indoor and outdoor germination are in this PDF from the University of Hawaii:

“To grow a coconut palm as a house plant, use a container at least 10 inches deep and large enough in diameter to hold the nut. Use a well drained potting soil mix. After soaking the nut, plant it with the pointed end down and the end that was attached to the tree upward. About a third of the nut should be above the soil level. Water it frequently, keeping the soil moist but not wet. As long as the soil drains well, it is difficult to give the germinating nut too much water. Keep the container in a warm location, preferably where the temperature never falls below 70oF and often is above 80oF. A container specimen should grow to be around 5 ft high and survive in the same container for about five years.

To grow the coconut in your yard, choose a site with well drained soil in partial shade. Place the nut on its side in a shallow hole, burying only the lower third of the nut. Water it thoroughly twice a week.

Under ideal conditions, a coconut will germinate in three months, but otherwise it may take up to six months. At germination, the roots should push out through the husk, and the first shoot, looking like a sharp green spear, will emerge from the cavity at the end of the nut that was attached to the tree.”

All you need to do is just bury a coconut part way and keep it watered. If it’s viable, it will grow.

My grandpop used to stuff coconuts into the holes the land crabs would make in his backyard in an attempt to slow down their assault on his St. Augustine grass. Eventually, some of them would germinate and he’d have to pull them out before they got too big.

You can often find baby coconuts sprouting in untended areas around coconut palms where the nuts have simply come to rest on the soil. They transplant readily and will happily grow even in clay soils, provided they don’t ever freeze.

This garden based on coconut palms is a nice project (albeit with annoying music and random cinematography):

If you can grow coconuts, grow ’em!

Here’s the coconut analogue to my Bilimbi video:

Feed Chickens Without Grain: 20 Ways to Cut Feed Costs by 100%

I would lose every bit of my bridge work trying to peel a coconut like that! Good to know about how to open the fruit with a simple smack with a machete.

I tried it yesterday. It hurt.

I wonder if he would be game for doing a podcast with me?

You can ask! He seemed to be the sort of fellow that would be up for anything.