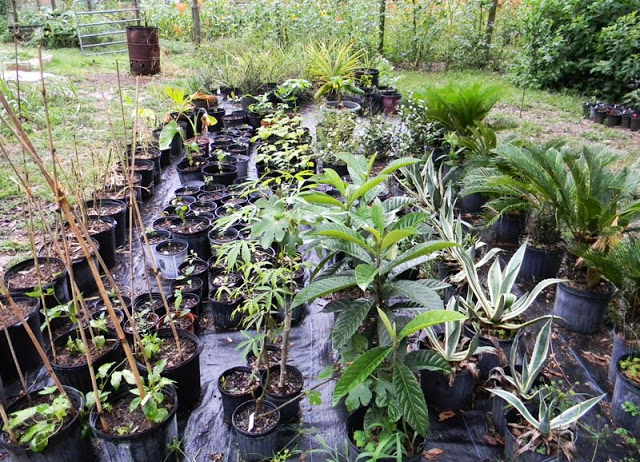 Craig (of Permie Flix) asks about plastic in the garden in the comments of my video on making potting soil:

“I noticed you used a plastic tarp, bag, and bag pots. Most gardeners are cheap skates and do similar. What are your thoughts on plastic use in gardening?”

“I go back and forth on plastic. I hate throwing it away. I do like the DeWitt/Sunbelt woven nursery fabric for occultation of new beds/no-till. Water comes through from the top but not light. Plus, the stuff will last a decade or so. It’s a pretty good trade-off. As for pots, discarded metal soup cans with holes punched in them work okay. Clay is too expensive. I just don’t see anything other than plastic for nursery work being feasible at this point. These plastic bag pots last for a few years and cost a few cents.”

“Plastic is so useful in ag, and everyone seems to be using plastic green houses, plastic mulch, and fabric row covers like the DeWitt/Sunbelt. Plastic fertilizer bags, plastic pots, fabric pots, plastic trays, plastic irrigation, plastic totes. That’s a lot of plastic in ag. I’ve just been wondering what the Earth’s carry capacity for plastic might be before ecosystems are irreversibly damaged, and how much is acceptable, because I can’t see it’s use going away, only accelerating. I’ve read that the doubling time for plastic is around every 11 years. And that there are end-of-life problems like toxic materials such as heavy metals that leach out of the plastic as the products decay over a span of years. Tad at KIS organics wrote an interesting post about fabric pots last year containing lead and BPA among other things: https://www.kisorganics.com/blogs/news/fabric-pots This week I’ve read two articles, one on the isolated Henderson Island that was found to have 671.6 items per square metre of debris on North Beach, 99.8% of which were plastic. And another that showed of 17 brands of sea salt only one had no microplastic in it. Previous studies in Sydney harbour showed >30% of the mullet sampled had microplastics in their guts, and over 90% of seabirds feast on plastic and then defecate it on land. It’s also entering our soils through ag and municipal compost. I know that worm growth rate is significantly reduced at 28% w/w microplastics and that they distribute microplastics in their casts throughout soils. Considering that plastic was only synthesised in 1907, I’m on the go back side of plastic use and planting directly in the ground where possible. But like you mentioned there aren’t many other options for nursery work if you want to save your back and pocket. And I can’t see consumer demand for biodegradable products making a dent in regulatory or commercial practices anytime soon either.”

It really is a conundrum. I would certainly like to go without using plastic, yet sometimes there really isn’t a better option.

What About Other Options?

Back in Florida people used to ask me “what about soil blocks for transplants?”

They’re great… except Florida’s “soil” won’t hold together. You have to get some clay from somewhere else to make them stick. And the time involved… well… might as well just get some plastic trays.

When I ran my plant nursery, many of my pots were scavenged from other nurseries. I reused pots over and over again and would give extra plants to people that brought back pots after planting my plants in their gardens…

…yet eventually those pots would wear out and be thrown away.

I don’t like the large amount of plastic ending up in the environment. It’s everywhere. Even recycling may not make sense as I’ve read it takes more energy to recycle plastic than it does to just throw it in a landfill.

Yet try building a greenhouse without plastic! If you’re lucky, you’ll be able to scavenge old windows, but still – the construction is much more time-consuming than just throwing up a plastic sheet.

And eventually, that plastic wears out and is discarded.

Getting Rid of Plastic?

It’s tempting to burn plastic to get rid of it, but that releases some nasty toxins into the air.

“Current research indicates that backyard-burning of waste is far more harmful to our health than previously thought. It can increase the risk of heart disease, aggravate respiratory ailments such as asthma and emphysema, and cause rashes, nausea, or headaches, damages in the nervous system, kidney or liver, in the reproductive and development system.

The burning of polystyrene polymers – such as foam cups, meat trays, egg
containers, yogurt and deli containers – releases styrene. Styrene gas can readily
be absorbed through the skin and lungs. At high levels styrene vapor can damage
the eyes and mucous membranes. Long term exposure to styrene can affect
the central nervous system, causing headaches, fatigue, weakness,
and depression.”
Yeah, that’s no fun. You can also burn yourself if you run through the ashes barefoot. My little brother did that when he was a kid, stepping on a piece of molten plastic and burning his heel badly.
Takeaway: don’t run through molten plastic and ashes barefoot. That brother is a fire-fighter now. No kidding.

All burning of plastic may not be bad, however. There may be the possibility of using plastic as fuel in the near future, though:

“Burning plastic in the traditional manner creates extremely polluting byproducts, as evidenced by the black smoke produced by the cup. But this didn’t thwart Levendis, who noted that plastic contains the same amount of energy per pound as premium fuel.

“We wanted to tackle the problem by preprocessing the plastics,” said Chuanwei Zhuo, a doctoral candidate in Levendis’ lab. Toward that end, the team developed a combustion system that adds a simple step to the burning process that allows for turning plastic into a fuel that burns just as cleanly as natural gas.

That simple step has a daunting name: pyrolytic gasification. Instead of directly setting the cup aflame with a match in the open air, the team’s reactor heats the material to a whopping 800 degrees Celsius in a completely oxygen-free environment. This causes the plastic to become a gas, which is then mixed with air before it is burned as a clean fuel.”

So is Plastic in the Garden Good or Evil?

Realistically, it’s probably evil – yet it’s an evil without good alternatives right now, at least that I can find.

I’ll keep thinking about plastic in the garden. I’m still on the fence. I don’t like the environmental impact but I also don’t know what else to use.

What are your thoughts?

Planting a Living Fence in Almost Any Climate

Growing Vegetables in the 1800s

Urban Farming in Paris and the Lure of...

The more you recycle plastic pots, even if they need throwing out eventually, the less you demand new plastics to be made. So even though it does end up in landfill, it’s reducing the need for more production. At least, in theory.

Back when we lived in town, we would visit the Sunday markets on a regular basis, for veg and plants. There was a stall run by an elderly couple, who kept their plants in plastic horticultural pots (recycled) but also had some in cut off milk-bottles, yoghurt tubs, etc. I guess they looked less professional, but they had an amazing following. I would always visit them first – because they had the best prices, and I wanted to support their recycling. Which most of their customers wanted to do also. So I guess the point is, make do with what’s available, before buying new plastic.

In your case, you’ve just moved to a new location, still making ties with the locals etc – so it’s hard to come by recycled stuff. Because there isn’t a lot of waste where you are, everyone makes-do, out of necessity. So besides using your own recycling containers, the only other option is to buy what you are able to. I

The only pots I buy now, are the ones my plants come in, and they have lasted me ten years (in some cases). I propagate my plants in them. In fact, I have an oversupply of pots. Other ideas for alternatives to plastic pots: recycled cardboard boxes like a plastic nursery tray. Fill it with soil and plant your seeds or take cuttings. So you’re not using individual pots, only to have to plant on, once they outgrow it. I’ve heard other people use their empty toilet rolls as starts. I’ve personally used them for sunflowers, and when they were ready to get planted, the toilet roll went in the ground. So no disturbing of roots.

Here’s a wacky idea though, and perhaps a project the kids can try. What about weaving small pots, out of dried, fibrous material? I’m sure there are a lot of thick vines in the jungle, that could be used for such a purpose. What about yam vines? Good old yams, come to the rescue again!

Good thoughts, Chris! I’ve often thought about the overuse of plastics in our lives, but hadn’t thought much about it in regard to commercial ag–or even out in our garden. As someone who sews, I imagine one could use some old fabric and sew some grow-bags. I don’t know how long they would last, though, especially in our climate here…

Excellent idea Rachel. I didn’t think of that option with fabric. We do it with things as fidgety as quilts. Although you rightly point out, they generally don’t have to live outside. Life expectancy may be short. I’ve seen chicken feed bags turned into shopping bags, via sewing – I bet grow bags would be possible too. I like your creative thinking with the sewing machine!

I have purchased some cloth root pouches that allegedly last for 5 years, you just wash them and reuse. I just got them about 6 months ago, and they are still here, so we are off to a good start. The cost might be a little higher per bag… okay a lot more, but I would love to send ya’ll some. Anything I can do to repay for all the advice and entertainment I have received, not to mention payback for the stupid comments I leave. If there is a way to send them to a family member or friend or family friend….member, to then forward to you, would make my day. Thank you Mr. And Mrs. the Good.
P.S. I am officially calling us fans of yours The Gooders. Let it be known. (We can be identified by ugly(( I mean that in a good way)) green shirts and the insatiable desire to compost anything.)