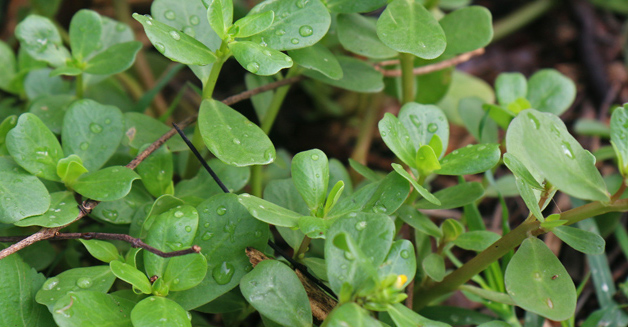 An annual plant well-known for its edibility, purslane is a common volunteer in gardens. It is capable of handling drought and growing in both loose, sandy soil and compacted clay. Purslane has fleshy leaves which are pleasantly tart and edible raw or cooked. It is generally a creeping plant, but can grow somewhat erect. The flowers are small and bright yellow. Purslane is the richest plant source of Omega-3 fatty acids and is also rich in antioxidants. Since antiquity, purslane has been used as a medicinal plant, with references in both Roman and Chinese sources. It is also reported that they are so good at breaking the soil with their roots, corn roots will follow after purslane roots deep into the soil, making it a good weed to leave alone in your corn patch (and likely the rest of your garden).

My method of propagating purslane is to dig some garden beds. Purslane almost invariably follows. If you want better luck, however, you can save the seed pods from purslane plants and then crack them over an area where you’d like the plant to grow. Don’t bury them deeply – they are like dust and will not germinate if entombed. Purslane can be cut multiple times for the table and will regrow. Eventually, the plants give up and die, but usually not before dropping plenty of seeds and ensuring the re-emergence of future purslane plants.

The States in America Using the Most and...

Very cool use of a common weed! I have never tried purslane but this makes me excited to forage for it.

Ever since I began trying to eradicate cogon grass, a lot of things started popping up that never grew before. Some of them look like Purslane, several things; in fact. Still unsure so we bought some from a small local nursery, four improved (ornamental) varieties. Reading up on them, they are edible but not very tasty. I need to check their tags tomorrow and do some more research and also nail down whether or not I have the wild stuff growing here so I can propagate it further.