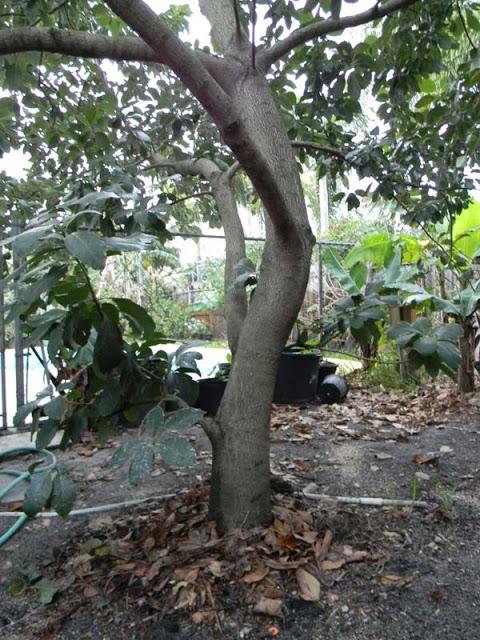 There’s something wonderful about growing trees from seed and that’s a reoccurring theme here at Florida Survival Gardening. One of my favorite stories is that of Eddy’s avocado. Originally posted on March 16th of 2013, it deserves a reprint.

So you were hoping I’d knock off all the “growing trees from seed” posts?

I was down in Fort Lauderdale a few weekends ago working on my Amazing Tropical Food Forest when I ran into my friend Eddy… and remembered his avocado tree.

Eddy, not being content with simply putting the tree in the ground, went for some serious overkill on his planting of the now-sacred seedling.

So there you go – another “fruit tree from seed” success story. This tree is totally beautiful and probably getting close to 20′ tall. I’ve never tried the “burying lots of MiracleGro” method… but if I ever have a friend dying of cancer that hands me a seedling… by golly… I will. Okay - no weekends for me!
Crash Gardening Season Finale: Water Chestnuts Hijacked by WHAT AM I WATCHING???
@The Brilliant Homestead: The Top 5 Best Garden Hoes
@The Prepper Project: How to Fix Clay Or Sandy Soils
Seedling Peaches from a Friend
3 comments
PinterestWhatsappEmail

Extreme Free-ranging Chickens: No Coop, No Fence, No...

18 Amazing Trees For Your Woodlot

Did you know the name of an avocado or avocado was first said by the population of the Aztec tribe WHO live in areas of Central America and Mexico. This plant has been Introduced to the residents of central Europe of the 16th century by Martin Fernandez de Enciso, a leader of the Spanish forces during the colonial Central America. From that Indonesia knows avocado since the Dutch colonial period, many shipments of fruit for the purpose of chitterlings.

If you do not believe, read the proof here:
Manfaat Buah Alpukat Untuk Kecantikan