Home Uncategorized Reprint: Why You Should Grow Tobacco (and How To Grow It)
Uncategorized

Reprint: Why You Should Grow Tobacco (and How To Grow It) 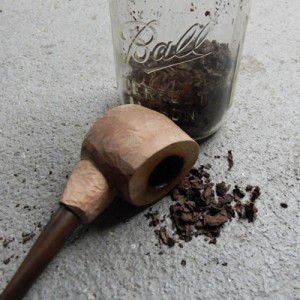 For the last few decades, we’ve been told smoking is the cause of everything from lung cancer to heart disease.

There doesn’t seem to be any middle ground in this debate. If you’re a smoker, you’re an outcast… a pariah… a Very Bad Person.

However, the truth about smoking isn’t nearly as cut and dried as you might think. Did you know that lung cancer rates rose even as smoking declined? Or that some studies showed longer life expectancies for pipe smokers than for non-smokers?

Strange but true. (Just don’t ask me for the documentation right now, ‘cause I used it to roll my own.)

Wherever you fall on the smoking spectrum, there’s one thing that’s sure: smoking isn’t going away. And this presents an opportunity for the hard-core prepper. Why?

A lot of folks need their daily nicotine. Business gurus will tell you that meeting needs is a great way to profit. Though you can’t legally sell your own homemade cigarettes right now, there may come a day when regulations fly out the window and the free market takes over again. Even if it doesn’t, being the guy that has what people need is a great place to be.

Imagine shipping gets shut down, or the cost of tobacco shoots to the stratosphere due to regulation or the rising cost of fertilizers or any of a number of reasons.

Even if you’re not a smoker, having some tobacco around could be very useful. Say you have a nice tobacco patch in your yard that you grow each year. Your friend needs a smoke really bad. You want help on a fence, you trade him some leaves and bingo: that tobacco patch has paid for itself.

“But,” you may ask, “How in the world do you grow tobacco? I know nothing about the plant other than the fact that it smells like burning manure? Dave! Help me! I’ll trade you some .22LR rounds and a can of beans!”

Alright… because you asked so nicely… and because I’m hungry… and because .22LR is roughly equivalent to gold bars these days… I’ll help you start growing your own tobacco.

How To Grow Tobacco

Growing tobacco is pretty easy. I’ve grown tobacco for almost a decade in my home garden. Though my method may not be the best, it works well for me and has been tweaked over the years into a pretty fail-safe operation. You need a few things, but all of them are really easy to find (with the exception of seed).

To get started, you need seeds or transplants. If you live in tobacco country, you might be able to buy some transplants locally; otherwise, you need to seed your own.

Unfortunately, starting tobacco from seed isn’t the easiest thing in the world – yet it’s not as tough as you might think.

Tobacco seeds are even smaller than poppy seeds and will get you in less trouble. A pinch of them contains hundreds of potential plants.

Because of their minute size, tobacco seeds need to be planted differently than most other seeds. To add an extra layer of fun, they also need light for germination – and when they do germinate, the seedlings are really, really tiny. This is why it’s really difficult to direct-seed tobacco in your garden. Chances are, the sun will wipe your plants out before they develop into anything – even if you have a totally perfect little square foot bed – so instead of planting them right in the soil, it makes sense to start them in carefully managed flats. These flats can be made from just about anything. I used to use egg cartons but I found that the soil in them dried out too quickly so I switched to using home-made wooden flats that are about 4” deep.

To plant tobacco, prepare a fine soil surface in your flat or container, make sure it’s good and damp, and then simply sprinkle the tiny seeds across it. Mist your seeds with your spray bottle, and make sure the flats are in the shade – if they’re not, you may dry out the soil and kill the plants before they emerge. If you live in an arid climate, you might want to cover your flats with some plastic wrap to keep in moisture. To avoid mold problems, I’d take the plastic off once a day and mist the ground when I did. If you don’t cover with plastic, try and remember to mist your flats about twice a day or anytime you think of it. (If they do dry out a bit, don’t freak out. Moisten them well and keep your fingers crossed. I’ve had tobacco pull through even when I’ve been less than religious about my watering. That said, do your best!) In about 10-14 days, you should see tiny seedlings begin to emerge from the soil. They’re so small you almost need a magnifying glass to see them at first.

Within a week or two, they’ll get bigger – and in a month or so, they’ll likely be an inch or so in height. As the seedlings grow, I thin out the flat with a pair of scissors, decapitating unwanted plants rather than pulling them out and disturbing the roots of their neighbors. Give each little plant its own space and their growth rate will be much higher.

When your plants get about 2-3” tall, transplant them to a second flat until they’re large enough to transplant – or, if your weather is mild and the sun isn’t too brutal, put them directly out into the garden. I usually wait until they hit about 6” before placing them in the garden, but I’ve had good luck with smaller plants as well. Once tobacco is transplanted, it grows really fast. Feed it compost, manure or whatever you have available. I’ve had them do okay in poor sand, but they do amazingly if they get a little more care. In a couple of months, your plants will be huge. At this point, you can start picking nice leaves. Watch out for hornworms, though – they’ll take a tobacco plant to pieces really quickly. Other than those, you’ll deal with minor pests like aphids, but overall, I don’t get too much loss. If leaves get chewed up, they go in my “pipe and cigarette” tobacco pile, if they’re broad and intact, they go in my “attempt to make cigars again” pile. After a few months, depending on your climate and average temperatures, your tobacco will burst into bloom.

The flowers are pretty and resemble their cousin the petunia. Commercial tobacco farmers remove the buds to force larger leaf growth, but I keep them for seed and because, well, they look nice. (For a video on growing tobacco, check out this one I made a couple of years ago.)

Now here’s the artistic part of this whole odyssey: curing. People will tell you it’s “not worth growing tobacco because it’s a pain to cure.” However, it all depends on what you’re looking for. If you want a smoke, all you need to do is dry and smoke the leaves. I used to park my car in the sun with the windows cracked open and spread leaves all across its dashboard.

One afternoon in the sun and they were nice and crispy.

I’ve also hung leaves in the barn for a year to dry and cure (those tasted better than the dashboard leaves.)

If you’re used to the taste of cigarettes, know this: that taste isn’t what raw natural tobacco tastes like. It’s a product of factories and flavor sprays and special blends. The taste of raw tobacco is smoky, grassy, biting… and yet still enjoyable.

If you’re more of a cigar smoker, you may not ever be happy with your homegrown smokes. Curing cigar tobacco is an art, much like wine-making. It can most definitely be done, but it’s beyond the scope of this article.

For pipe smokers, I’ve found it’s possible to make a pretty good latakia/English pipe blend imitation by taking dry leaves, soaking them in water and molasses, then putting a basket of them in the smoker for a day. I used hickory chips, which I’m sure is totally wrong, but it tasted great.

After taking the whole leaves from the smoker, I cut them into little bits with a pair of scissors, then let them dry to a good smokeable moisture content. Not bad at all.

If you’re more of a “Captain Black” smoker, you’ll have to look around for pipe tobacco flavoring – I haven’t been able to make a decent aromatic blend from my homegrown leaves, though I’ve used black cherry juice concentrate, vanilla and other experimental flavorings from my wife’s collection of spices.

Speaking of spices, if you like smoking cloves, you’re in luck. A decent clove mixture can be made by simply taking dried tobacco, sprinkling it with ground cloves, then rolling that in your wrapping paper of choice.

Been there, done that, got a numb mouth.

Yes, it’s true that tobacco has earned some of its deadly reputation – yet if you really want to talk about a health crisis, you should talk about sugar/high-fructose corn syrup and obesity.

The very people that often condemn smokers don’t seem to realize that their diets of processed foods and Coke aren’t any better than putting away a few packs of cigs a day.

The key, as always, is moderation.

Growing your own tobacco without pesticides and not adding weird additional chemicals in the processing phase is a pretty good way to minimize risks. It’s ORGANIC, for goodness sake. And we KNOW organic is good for you, right?

Besides – even if you grow tobacco, no one is going to force you to smoke it. In fact, you can’t barter something you’ve already consumed. Think of your tobacco patch as insurance for the future.

One other thing about tobacco: beyond smoking it, you can also use it as a powerful organic insecticide. Boil leaves or cigar butts into a tea, then strain and spray as needed. Just don’t spray it on tobacco, peppers, eggplant, potatoes or tomatoes, since those plants are all related and may share viruses. (You also might not want to apply it to your salad greens – too much nicotine, like many things, will make you sick or kill you.)

Now, finally, I realize that every time tobacco comes up, some gal is likely to get all weepy or angry and point her finger and yell “How dare you say anything good about tobacco? My dad/aunt/mother/grandpa/ brother/demon lover/best friend’s sister’s baby daddy/hamster died of lung cancer!”

Alright - my post was too terrifying for some folks
Okay - no weekends for me!
Carolina wren babies in our food forest
Starting right now, I declare this "South Asia Week!"
Pa Mac talks wood varieties and their uses

Awesome article. I don’t have a match but I have a light!