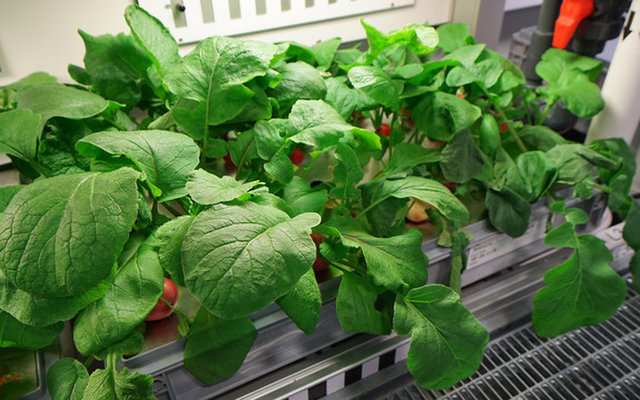 “Antarctica is not the most likely place to find fresh ingredients for a salad.

But German scientists have just collected — and eaten — their first batch of lettuce, cucumbers and radishes from a new greenhouse on the frozen continent.

“It tasted as if we had harvested it fresh from the garden,” Bernhard Gropp, the manager of the Neumayer Station III, a German research facility in Antarctica, said in a statement.

The shipping container-size greenhouse, called EDEN ISS, was installed in February about a quarter-mile (400 meters) from the research station, which is located on the Ekström Ice Shelf. The food-growing lab is providing welcome fresh veggies for Gropp and his other isolated colleagues during long missions in Antarctica. But EDEN ISS has a loftier mission; the facility is  an experiment led by the German Aerospace Center (DLR) designed to test the best methods for cultivating crops for astronauts.

Space-grown plants could help sustain crews on long missions inside the International Space Station (ISS), or at farther destinations like the moon or Mars, where deliveries of fresh food would be less practical.

With such a hostile environment outside, the Antarctic greenhouse indeed has conditions like those of a spacecraft: It has no soil and no natural sunlight, and it has to operate as a totally closed system, with its water distribution, purplish artificial lighting and carbon dioxide levels tightly controlled.

Many of the systems can be managed remotely from Europe. But DLR scientist Paul Zabel is in Antarctica with the greenhouse, spending about 3 to 4 hours each day taking care of the plants. Zabel has so far collected 8 lbs. (3.6 kilograms) of lettuce, 70 radishes and 18 cucumbers in the first harvest, according to the DLR’s announcement yesterday (April 5).”

I wonder how much this salad cost?

The farther you get towards the poles, the harder it is to grow crops. Eventually, you are stuck eating whales, seals, fish and penguins. Unless you have a zillion dollars for a greenhouse, that is. It would be awesome to see this research translate over to a Mars base eventually.

I hope the US doesn’t start WWIII in Syria and ruin our chances for another century.

“With such a hostile environment outside, the Antarctic greenhouse indeed has conditions like those of a spacecraft: It has no soil and no natural sunlight, and it has to operate as a totally closed system, with its water distribution, purplish artificial lighting and carbon dioxide levels tightly controlled.”

Cool experiment, but it noticeably doesn’t have two other very important conditions that space does: radiation and low/zero gravity. They’ll have to ensure they protect seeds and crops against radiation, and use some kind of absorbent sponge-like soil replacement to get water down to the roots, to use this in a space environment.

I’m less concerned about their nutrition than I am about them falling off the earth! Sooooo close to the icewall!!! SCARY!