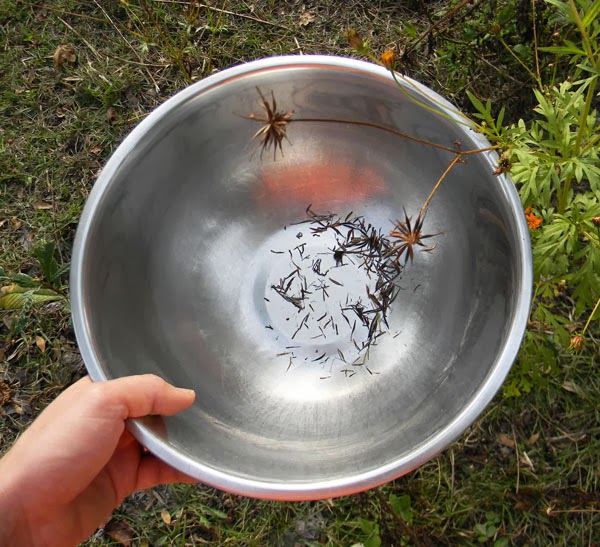 My daughter and I spent the other day wandering the yard collecting seeds from the various plants that have played out most of their reproductive lives this season.

We started with the many orange cosmos (Cosmos sulphureus) scattered around the food forest. They make seed heads that look a lot like Bidens alba. Little sharp stars of almost black seeds, waiting for a passing animal or a good gust to knock them to the ground. Cosmos attract a lot of pollinators – they seem to be a particular favorite of the zebra longwings that flutter endlessly through my yard.

The seeds are easy to gather by scooping them off the brown heads and dropping them into something convenient.

After the cosmos, we moved on to the Tithonia rotundifolia, an annual cousin of Tithonia diversifolia, also confusingly called a “Mexican sunflower.” With these guys, I just snip off the flower heads after they drop their petals, turn brown and point towards the ground. Getting the seeds out is a little bit of a chore since they’re wedged firmly inside the heads. I basically just break them apart, pick out the bigger chunks and let the chaff and seed sit in the bowl. I’ll toss them both out together on the ground when I replant in the spring.

From there, it was on to the buckwheat bed. We got plenty of seeds from our buckwheat experiment, though I had to wait a while for a dry day to start gathering them. The seeds are pretty easy to gather from the dried plants. I rolled them around in my hands to break off the little bits of stems left sticking to the grains, then poured them from one bucket to another in front of a box fan to blow away the miscellaneous leaves and chaff. This year’s seeds will be used for planting, though Rachel really, really wants to eat them. Maybe I’ll give her ONE to eat. JUST ONE!

After the buckwheat, we moved to the back yard and gathered a bunch of seeds from the little bed of zinnias my daughter and I had planted some months back. With zinnias, the seeds form at the base of the old petals. It’s not too hard to pick them out. You can do it without beheading them, but I like beheading things.

Once we gathered and cleaned our seeds (not very meticulously), we labeled envelopes for the bounty and put them away for the spring.

This next year I’m planning on adding a ton of flowers to the food forest in order to add habitat, confuse predators, attract pollinators and just generally make the yard look amazing as heck.

Can You Grow Black Sapote From Seed... and will it make GOOD fruit??
Back to Pumpkin Breeding
Updates on Grape Pruning, Coconut Seedlings, Jackfruit and Pigeon Peas
No, There Are No Blue Watermelons! Avoid Seed Hoaxers!
Planting Seeds the Easy Way (Redux)
buckwheatcosmosflowersmexican sunflowerpollinator plantsseed-savingzinnias
0 comment
PinterestWhatsappEmail

How to Save Tomato Seeds with the Fermentation...