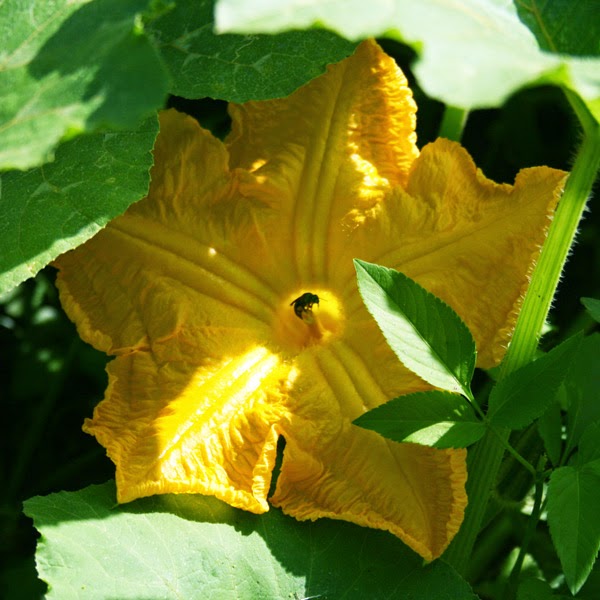 Karen has a question about why her Seminole pumpkin is dropping all its fruit:

“I had beautiful vines (the leaves were mottled — gorgeous even without fruit (…) but the hurricane wiped them out.

Although the vines (…) flowered well, the blossoms all fell off or produced only little pumpkins which then shriveled up and died. 🙁 … so I wanted your advice on what the problem most likely was. Lack of calcium or some other mineral? The soil had been enriched over the course of several prior years, with virtually nothing else growing except some weeds that I took care of organically.”

My bet is a pollination issue.

Pumpkin vines make two types of blossoms: male and female. Pollen from a male bloom must travel to a female bloom in order to make a pumpkin.

This requires some sort of pollinating creature – usually bees. The female bloom has an ovary at its base which will develop into a pumpkin if pollinated. The ovary looks just like a little pumpkin. If it does not receive pollen, it drops off.

It sounds like Karen’s vines were otherwise happy and healthy, at least until the hurricane came, so chances are there was a lack of bees at the proper time. Sometimes this is because the bee population is low; other times it can be because of inclement weather during blooming.

Fortunately, hand-pollinating is easy. Just take a paintbrush or a Q-tip or even the tip of your finger, then brush some pollen from the male blooms and take it over to the female blooms and but the grains on the stigma. Most times the “little pumpkin” at the base of the bloom will grow instead of falling off.

Albert Etter: Another "Growing Fruit Trees From Seed" Success Story
This worked better than I would have expected...
How to Grow a Mango Tree from Seed the Easy Way
Plant Propagation, Home Nursery Stuff and Rain from Heaven
What to do with Extra Potting Soil

I wondered about this, because I’d read about how finicky squashes can be, and when I tried growing kabochas once, it seemed like all the flowers were male! Then when there were female flowers, nothing much happened.

But when I grew Seminole pumpkins for the first time here, results were great! I ended up with 23 pumpkins and they were delicious! I think the secret is, my neighbor down the road is a beekeeper, and in the morning, the blossoms always had four or five bees in each flower, tumbling over each other to get to the little nectar pits in the bottom!

I love this blog. So cool. I love growing Pumpkins for Halloween.

I’m growing Seminole pumpkins this year and I’m having problems with fruit setting- it isn’t a lack of pollination. About 1/5 female flowers never develop enough to open. Instead, the developing flower withers and then drops off of the vine before opening. The vine is otherwise healthy and I have 1 very large pumpkin already growing on the vine. But it has taken weeks for another female flower to mature enough to open fully for pollination. I’m not sure if this is the problem of the OP, but it is definitely not a pollination issue with mine this year. It has to be something else!

Hi David, sorry this post is totally not related to Seminole pumpkins, though I am growing several seminole pumpkin vines in Hawaii right now and we will see what they produce by the end of the year. They were started in mid summer.

This post is in regards to your video about caterpillar problems and wanting more wasps in the garden. While reading comments on the Baker Creek Seeds website i noticed that Thai Purple Podded Yard Long beans attracted an unusual number of wasps and hornets to various people’s gardens around the US. You might want to look into planting a few of those beans in various places in your garden to attract additional predatory wasps.

Love your videos! I am a fan of Stephen Edholm too (Skillcult). We call him the crazy axe man at my house. Cheers!

That’s really cool. Beans bringing in wasps. I grew those purple-podded ones before and didn’t think they were a great crop, but I wasn’t paying attention to wasps.

You know what? The last two years, I grew these long-ish green beans with little red speckles on the pods (got from a friend, no idea what they’re called), and we noticed that with them as well: they have little nodes next to the flowers that release… pheromones? Nectar? I have no idea what it is, but the wasps LOVE it. So do the ants. We grew the vines up our porch railing and were a little dismayed by how many wasps they attracted… but at the same time they were never aggressive, so we got used to it. Maybe it was like drugs for wasps, and they were all too stoned to care about people walking by. I do recommend growing them on some kind of trellis, though, because the ones nearer to the ground always had ants, not wasps, on them.

My passionflower vine has similar nodes at the base of leaves, and likewise attracts wasps and ants.