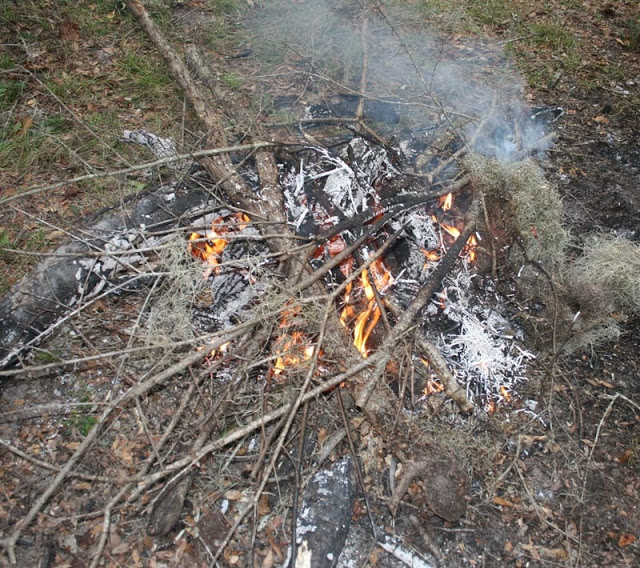 I posted this video recently:

In the comments, my friend Steven of Skillcult left a good comment on the proper use of fire:

“Thank you for pronouncing my names better than I do lol. Somewhere there is a video about how this culture in Africa actually grow new forests around villages using slash and burn. It is basically a big open area and the assumption used to be that they were killing all the forests, but the forests are just around the villages and it turns out they created them on the plains. It’s tropical so stuff grows fast and they have a cycle of burning every so many years. The farmer they filmed burning was very specific that they wanted to create white ash, so it doesn’t seem to be a biochar culture. But, like the classic slash and burn, they move on and let it regrow, but it’s all in a very small area. Unfortunately, I can’t find the video.

The issue with just adding to compost or spreading randomly is that there is some threshold at which you see real results. If I had been doing that, I wouldn’t know anything really and the char would be spread very thin, not enough to do much. The issue with many biochar trials is that they are carried out short term by people who aren’t really practical gardeners. Many are actually pot trials. I’m a lot more interested in your experiments and how it works for you over years at your property.

My experiments are very simple and I think the best thing to do for most people is a bed with at least 6 foot long sections of different amounts of charcoal by volume and one control section. My most revealing bed has been 10% – 5% – 0% with no pre-charging of the char with nutrients, and everything treated the same in each section. I just added a small amount of ash to the 0% section when I dug in the char, because there is a certain amount of ash in the biochar. The bed is often an analog graph of biochar effectiveness. That taught me that for the char I’m using, 10% is clearly better than 5% and both are WAY better than 0% It’s not unusual to see something like 400% more growth in the 10% end.

That information is super valuable as I now know to use use 10% minimum. The next obvious experiment is to do the same thing, but with 15% 10% and 0% etc, until I reach a point of diminishing returns or the effect starts to reverse. If you can do a 24 foot long bed, with four 6 foot sections of 15% – 10% – 5% – 0% that would learn you a lot in one go. I don’t think the controls need to be that rigorous, but i would not add anything extra to the char, mostly because it’s contrary and we’re both contrary :), but also because it’s hard to add exactly the same to the 0% section. Just add the same stuff, like other fertilizers to all sections.

One thing I did do though, was I treated the 0% end exactly the same, I even mock dug the biochar in. It could also make a difference if the char is not homogeneous, so I’d save enough and make sure it’s crushed up and well mixed together before installing the experiment. An easy way to measure the amounts is just use a ratio of inches, so figure how many inches of char to amend a certain depth and figure how many inches you need, lay that on top of a flat bed to X inches deep and dig it in. Once it’s set up you can plant the same thing along the entire length and see exactly what’s up.

Do it David, biochar graph beds, it’s a thing. Be the first one in your country to plant one! All the cool kids will be doing it. I think I need to make that video soon, how to, rationale and all that. Imagine if 100 people planted those, it would tell us a lot I think.”

I would like to try the biochar experiment. Today I’m working on getting electric to my land so I can start building a cottage. First some living space, then some gardens, then biochar. One step at a time. I like Steven’s idea for setting up a bed.

I was thinking about trying this experiment myself, now I’m definitely gonna do it.

It’s it necessary to let the wood season, or is green wood fine to make biochar?