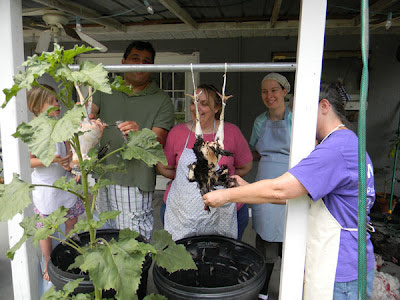 Our friends learning how to start slaughtering

I’m not a big fan of killing things, but the value of meat as a part of the human diet is hard to argue with. We’re born omnivores.

Yet most of us get the heebie-jeebies when it comes down to the thought of whacking animals for food. If you’re going to survive, however, you’ll have a hard time doing so without learning at least some basic butchering. The post-kill butchering isn’t so bad… but learning how to start slaughtering animals is a hard hurdle for most folks.

Trust me… I’m no expert. I’ve had to overcome my natural squeamishness in order to have a farm. I started with turnips, moved on to gutting fish, then I managed squirrels, a few doves, then a chicken, then many chickens, then some guinea fowl, a young goat buckling and a pair of racoons.

“How could you slaughter that lil’ goat – he’s SO CUTE!” one of my neighbors said. And yes, he was cute. But he was also a male who would soon be attempting to breed his mother and his cousins. He also consumed resources on my small farm. With the price of red meat where it is, slaughtering Bucky was much better than letting him eat up my livelihood. And the resale market on male goats is very, very poor.

If you haven’t slaughtered anything before, start to learn. Acclimate yourself to the necessity of ending life for the sake of survival… because if you don’t, you don’t have farm animals… you have pets. And most pets (some dogs excepted) will not help you in the econopocalypse.

Unless they’re served in a curry sauce.