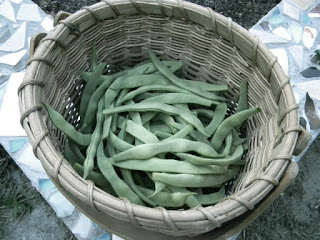 Other than radishes, growing green beans is about as basic as it gets. Reliable, productive, tolerant of poor soil and tasty, they are one of the first crops any new gardener should try.

Of course, there are many, many beans that fall into the “green bean” category. If it’s called a “green bean,” that basically just means it’s a bean with an edible pod you eat while the beans are still unripe. If it’s a variety you let hang on the plant until the beans are basically ripe, it’s a “shell bean.” Some varieties of shell beans are eaten while still soft, others are allowed to dry completely until you have “dry beans.”

Beyond the “shell” or “green” varieties, beans also come in “bush” and “pole” varieties. Bush beans are usually small, squat plants that can stand without support. Pole beans are climbers and need trellises to do well. (A profile on my favorite pole bean, the snake bean, is here.)

Today I’m focusing on bush green beans since they’re drop-dead easy. No trellises, no drying, no shelling. Plus, quite a few can be grown in a small space.

Let me show you the Bean That Got Me Gardening: I was six and went to the store with Dad to buy some seeds. The yellow beans caught my eye… we bought them… and they went into my very first garden. Burpee’s “Brittle Wax” beans. I’m still growing them today because they’re consistent, productive and taste good. They’re not the most flavorful bean we grow, but they look cool.

And speaking of cool – we grew these beans a few years ago in Tennessee. They’re incredible: Those are called Purple Romano beans. The purple color makes them really easy to see and pick on the plants, even though they turn green when cooked. I originally bought seed at a big box store… and never saw them for sale since, except online. Territorial carries them, and that’s also where I stole the above image from: http://www.territorialseed.com/product/513/bush_beans
Beyond varieties – let’s talk about culture. Beans like warm weather and will not stand freezing temperatures. Bush beans do not have the strong root system of pole beans, so they need a bit more water to stay happy. Plant your beans 1″ deep and about 6″ apart in rows roughly 12″ apart and you’ll do fine. In a week or less, they’ll pop up and it’s off to the races.

Beans usually start producing pods in less than two months – and once pods start getting to picking size, keep them picked. If you don’t, the plant will give up producing new pods. We planted a few small beds of beans this year and we’re getting baskets of beans right now. Enough to eat every day, share at church and probably freeze as well. Bush beans can be sown multiple times through the warm season and you’ll get more beans that way. Plant a new bed every three weeks or so and you’ll be rolling in tasty pods.

As for pests, you’ll get stink bugs and maybe bean beetles later as the summer progresses. I don’t worry about them unless we get a total plague. One year the bean beetles totally chewed through a bed I’d planted. Fortunately, we’d already harvested plenty of beans. It was my own fault they went nuts, though – I had planted the bean bed in a monoculture. Nice, even rows for the beetles to feast upon… nothing but beans for miles, man.

If you get problems like that, I’d just just bury the plants 12″ or deeper under some other crop area, bugs and all, wait a bit, and start over again. Or burn them. Or chuck them over the fence for your chickens to mangle. No big deal. Seed is cheap and beans grow fast. Beans are also a nitrogen-fixer, so planting them in front of demanding crops and on new ground is a great way to give your garden a boost of fertility. I throw beans into empty corners during the warm season, just as I do with peas during the cool season. They’re tough enough to thrive without much care… and they feed the ground? Yep. All aboard the bean train!

But… the best thing about green beans? Letting your kids eat them right out of the garden, sweet and sun-warmed. When I pick a basket, I always acquire little “helpers” who wish to eat the beans. And since the pods are pesticide-free, nutritious and abundant… who am I to say no?

For more information on survival plants, check out my book Florida Survival Gardening.

@The Prepper Project: The Pros and Cons of Square Foot Gardening

@The Prepper Project: How Much Land Does It Take To Feed Yourself

I love Romano beans! I grow the pole version, which climb to the sky and produce like crazy.
Here in the SF East Bay, if I start them indoors or have a warm April, I can harvest from May to October.
If you miss a few when picking, they get tough and the beans fill out, but you can leave them to pick later as shelling beans, very similar to cannelini. Although this does slow down the production of new pods, so if you just want to eat fresh green beans, then pick the too-old ones also and just discard them.
The variety I grow is Musica:
https://territorialseed.com/products/bean-musica
This Helda looks good too, haven’t tried it:
https://territorialseed.com/products/bean-helda

Beans are also on the “easy” list for seed savers.

Hi, I see you wrote this in 2013, but maybe you will see this : ) My bean plants had been producing well, then got a bit heavy of leaves, and a short time of only a few beans, after I had gotten many beans each day, now have lots of flowers again. I pulled off some bad leaves, saw a plant really struggling, and pulled it, the roots were covered with nematodes. Is it too late to help this crop…it is pretty hot. Thanks for all your help, eating a cucumber right now : ) God bless you, Betty

It’s too late. Mine do the same thing. They will try to bloom again but the pests usually get them. I would plant again in fall.