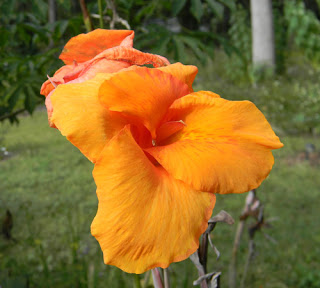 I was curious on the matter does it matter the color or variety of the canna that is edible? I love the Red King Humberts yet if all are edible would love to make a mix variety of the colors and possible sizes. Any other information on this such as does one color from another change the taste and so fourth is greatly appreciated. Also are the leaves edible? If so, how would one usually prepare them?

Have you ever tried eating the rhizomes of the Cleopatra Canna? I bought one for its beauty, but am definitely curious if its rhizomes would make a tasty lunch.

Cannas I have produce orange colored flowers and plants reach 5 to 6′ in height. Casually checking the “internet” I found a comment saying the leaves were edible. So I sheared off a top leaf and blended it in my smoothie. Well, don’t know the nutritional qualities, but seems to blend well EXCEPT for the fibrous rib down the middle. If you may try it, cut the middle fiber out as it just twisted around the blender blades. Otherwise, I presume the leaves provide ruffage. “Ain’t dead yet.” LOL Anyway, I find it curiously “blendable” as the leaves chop up in a very fine fashion–smooth. I observe that within minutes of the leaf being severed from its stalk, it rapidly turns brown.

Hi David, Question I have is, are the seeds edible?

I’m not sure. They are very, very hard.

These canna lilies are super hardy. I got a whole bunch from a friend and had no time to plant them so I just put them in a water trough and during winter the water trough was completely frozen and I thought these canna lilies were dead for sure, but now they are sprouting new shoot from the root.