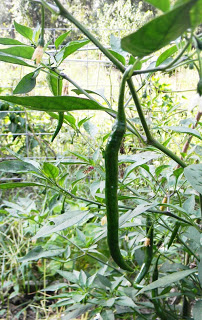 Cayenne will self seed but self seeded cayennes grow in cluster shapes of a cayenne pepper. Amazingly they are very hardy and you can dig them up and put them where you feel they belong, Some I didn’t even shade to get their roots to establish and they took off like rockets after moving them. I recommend potting them up and keeping them shade if you are desperate for success. Then you can transplant after the roots establish. As for me I was just sticking places. I also noticed when the seedlings were in a cluster they survived a frost so if you see a cluster and its not beyond your frost date just leave them (or cover them with a plastic dome like a 2 liter) and dig them up after the threat of the last frost as ended. Some how those clusters retain enough heat to stop a light frost.