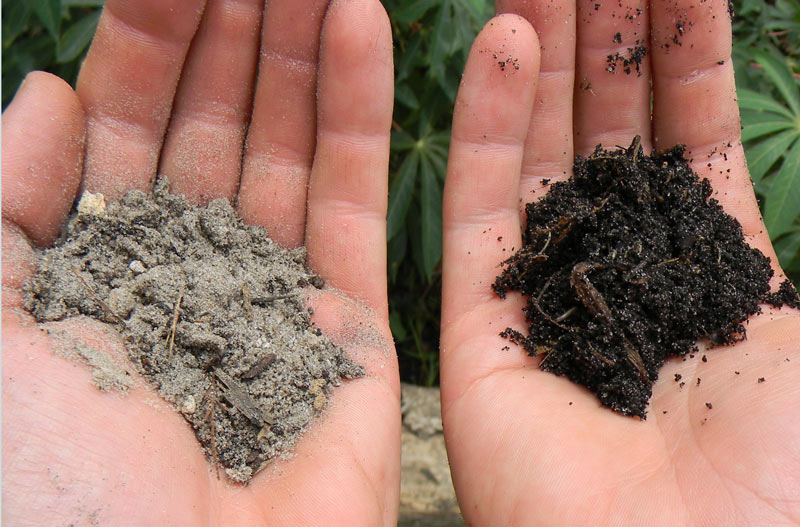 According to a recent article at Grist:

“At a time of climate chaos and ever-growing global greenhouse gas emissions, anything that helps vast swaths of farmland sponge up carbon would be a stabilizing force. Moreover, carbon-rich soils store nutrients and have the potential to remain fertile over time–a boon for future generations.

The case for synthetic N as a climate stabilizer goes like this. Dousing farm fields with synthetic nitrogen makes plants grow bigger and faster. As plants grow, they pull carbon dioxide from the air. Some of the plant is harvested as crop, but the rest–the residue–stays in the field and ultimately becomes soil. In this way, some of the carbon gobbled up by those N-enhanced plants stays in the ground and out of the atmosphere.
Well, that logic has come under fierce challenge from a team of University of Illinois researchers led by professors Richard Mulvaney, Saeed Khan, and Tim Ellsworth. In two recent papers (see here and here) the trio argues that the net effect of synthetic nitrogen use is to reduce soil’s organic matter content. Why? Because, they posit, nitrogen fertilizer stimulates soil microbes, which feast on organic matter. Over time, the impact of this enhanced microbial appetite outweighs the benefits of more crop residues.
And their analysis gets more alarming. Synthetic nitrogen use, they argue, creates a kind of treadmill effect. As organic matter dissipates, soil’s ability to store organic nitrogen declines. A large amount of nitrogen then leaches away, fouling ground water in the form of nitrates, and entering the atmosphere as nitrous oxide (N2O), a greenhouse gas with some 300 times the heat-trapping power of carbon dioxide. In turn, with its ability to store organic nitrogen compromised, only one thing can help heavily fertilized farmland keep cranking out monster yields: more additions of synthetic N.
The loss of organic matter has other ill effects, the researchers say. Injured soil becomes prone to compaction, which makes it vulnerable to runoff and erosion and limits the growth of stabilizing plant roots. Worse yet, soil has a harder time holding water, making it ever more reliant on irrigation. As water becomes scarcer, this consequence of widespread synthetic N use will become more and more challenging.
In short, “the soil is bleeding,” Mulvaney told me in an interview.”
I don’t worry at all over the spectre of man-made climate change, but the loss of soil potentially caused by synthetic nitrogen directly impacts farmers and gardeners.
We have a rough patch of ground right now that I plan to improve via chopping and dropping biomass-creating species such as Tithonia diversifolia and nitrogen-fixers such as pigeon pea and Leucaena leucocephala.
If I tilled that ground and chemically fertilized it instead, I would get yields at the beginning but would likely burn up what’s left of the topsoil. For whatever reason you decide to do so, getting carbon in the soil is a good idea. I’ve seen soil transformed from sand to rich loam in less than a year thanks to an abundance of organic matter.
I want a rich soil filled with microbial life – not dead dirt shocked to a semblance of life by chemical fertilization.
It seems science is with me.

Yeah, it would probably be fine. If I have to give something a kick in the right season, like I used to do with 10-10-10 and citrus, I would throw down compost at the same time.

Best way is the slow way, though: plant lots of nitrogen fixing plants and then cut them down so the carbon/nitrogen mix and increase soil fertility and humus at the same time.

I was looking at this yesterday from a different viewpoint: relationship between fungi and plants primarily focusing on the role of aquaporins (some of the N-species are transported and can affect aquaporin activity).

From
Mycorrhizal mushroom diversity and productivity—an indicator of forest health?

Increasing nitrate and ammonium inputs in forest
ecosystems have been shown to reduce the ectomycorrhizal
mycelium growth in the soil (Arnebrant 1994; Nilsson and
Wallander 2003) and to decrease the species diversity and
fruit-body production of ectomycorrhizal species, whereas
saprobic species are much less affected (Ritter and Tölle
1978; Arnolds 1991; Wiklund et al. 1995; Wallenda and
Kottke 1998; Lilleskov et al. 2001; Peter et al. 2001; Trudell
and Edmonds 2004; Termorshuizen 1993).

I noticed this play out around my banana trees. I have fed them 10-10-10 several times over the last year and a half. The soil wasn’t great to begin with, Florida sand with a tiny bit of loam, but I added compost and mulched heavily. The trees were struggling, so I gave 10-10-10. They did good for a while. Fast forward to now, the soil looks worse, the trees are in rapid decline and ants have infested the soil and banana plants. Contrast this to my raised gardens that have gorgeous built up soil where I constantly chop and drop and fertilize with Jobe’s Organic 4-4-4 with Microbes. The soil is soft and crumbly with few insect problems and relatively no ants. I intensely garden this raised bed so constant mulching and regular seasonal applications of organic fertilizer and compost are necessary. I strongly recommend Jobe’s and mulching. This last time, I needed to make it go further and mixed it with water then applied it over a whole bed. It wasn’t long before the plants started greening and three species of mushrooms started popping up.
Lesson learned: apply conventional fertilizer like a vitamin supplement, not the daily food. Ideally, if the soil is extremely healthy, ‘vitamins’ won’t be needed.
Now, hopefully I can rescue my banana trees.