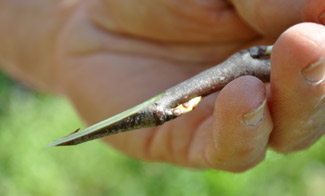 I’ve been studying up on grafting over the last couple of weeks and just found a good post by Lee Reich over at Mother Earth News:

I might be accused of being the Henry the Fourth of horticulture. Visitors here are amazed — or is it shocked? — to learn of my apparent ruthlessness.

A case in point: I grow about two dozen varieties of pear, all trees I made myself by growing rootstocks from pear seeds and grafting onto those rootstocks one or more stems (known as scions) of a variety I want to grow. (Pears on seedling rootstocks grow very large and I’m afraid of heights. So I usually make dwarf trees by grafting scions onto scions of special dwarfing rootstocks that, in turn, get grafted on the seedling rootstocks.) Problem is that I’ve never tasted many of the varieties I’ve grown. I chose them from recommendations or from printed descriptions. Alas, some varieties never live up to their promise, for me at least. And then, it’s off with their heads.

In contrast to Henry, I don’t lop off their heads and that’s the end of them. Instead, after lopping a tree back to a fairly low stub of trunk, I then stick on some new scions. With a full-grown root system beneath them, the scions, once they’ve knit to the rootstocks, really take off, often growing more than 3 feet in one season.

These “top-worked” trees also bear quickly, sometimes within a couple of years. And a couple of years after that, the graft smooths out so that you’d hardly guess at the apparently brutal treatment the tree endured just a few years back. Unless, of course, I’m not pleased with the fruit of the new variety, in which case it’s again, “Off with your head.”

My favorite graft for these tree makeovers is known as a bark graft and the time to do it is just as leaves are beginning to poke out of recently dormant stems and the bark easily separates from the wood. Which is now, early May, here in New York’s Hudson Valley. Ideally, foot-long scions of one-year-old wood (last years growth) have been gathered a few weeks previous and have been kept dormant with refrigeration.

The nice thing about the bark graft is that it comes with an insurance policy. Onto a stub of a trunk a couple of inches or more in diameter, you can stick 3, 4, 5, or even more scions, depending on just how wide the trunk is. Only one scion needs to grow; the more that are grafted, the greater the chance of success.

The graft itself is simple. I make a long, evenly sloping cut, typically about 2 inches long, near the base of the scion. Then, into the freshly cut stub on which the scions will be grafted, I make two slits about the width of the base of the scion and through the bark and down to the wood. Lifting the bark near where it was cut provides an opening into which I slide the cut scion with this sloping cut facing inward and deep enough to cover its sloping cut.

This is repeated with the other scions, all around the stub. One or two staples from a staple gun or a wrapping of electrician’s tape suffices to hold the scions and the flap of bark from the rootstock in place.

It’s truly amazing what trees will live through. I’m going to be severely cutting back a mulberry in a month or so and grafting away.

We’ll see if I can pull off this method successfully.

It’s not like I’m going to kill the tree trying… killing a mulberry is really tough.

I’ll post pictures when I graft and keep you all posted.

Grafting is something I really want to learn to do.

I grafted for the first time on a loquat tree seedling – that's a really easy one to have success with. After that, I jumped into plums. This spring I'll be trying a bunch of new experiments.

Good luck. I save a bunch of seeds from a prolific American Persimmon I have growing in the yard to use as rootstock and grafting experimentation. I have two types of unknown Japanese Persimmons growing in complete shade that I want to try and propagate. One is a super delicious acorn shaped astringent variety. The other is a more round non astringent type. (First time in three years it produced anything since the previous owner thought it was a good idea to plant it under a dense canopy of evergreen trees.) The rabbit hutch is practically sitting on the persimmon, so I see rabbit poo around all my trees in the near future.

Great! Did you keep the seeds moist? I believe you need to plant persimmon seeds right away because they rapidly lose viability unless kept damp. I keep them in the fridge for a few months after harvesting in the fall, then plant them out. Alternately, you can plant them in a flat after eating the fruit then leave the flat in the yard to chill and freeze and thaw through the winter. I've done that and they come up in the spring.

I think that most home scale fruit growers are better served by a method called frame-working. There are advantages and disadvantages, just as with top-working, but the balance tips toward frame-working most of the time when working on a small scale. In frame-working, you save the framework of the tree that is already established- the scaffold limbs and some major branches up to a certain size, and graft many scions on to those to replace all of the fruiting wood. Advantages are that there is much less disease risk for the tree since there aren't giant cuts that could let fungal infections into the heart, and fruiting can be faster, or more like you can get more fruit more quickly because you don't have to re-grow the entire top of the tree. Disadvantages are that it takes longer because you have to make a bunch of grafts and it requires more scion wood. I prefer to use long scions too, since they fruit more quickly, so that requires even more than you would need otherwise, though short scions can be used. I hope to do a youtube video on frame-working in the next couple of months, but the short version is use scions with 8 or more buds and graft close into the framework of the tree so that you are replacing all of the fruiting wood. I use mostly whip and tongue or cleft grafts into wood 3/4 inch and down, but there are exceptions where one has to graft into the side of a limb where there is no stub to graft onto, or where a graft is best made into wood an inch or larger. Usually the tree will look almost normal after one season's growth.

There are some pictures in this blog post. https://turkeysong.wordpress.com/2015/01/10/turkeysong-the-year-in-pictures-and-video-2014/ The first and second pictures show a tree frame-worked and the result of a season's growth, and some subsequent pictures show frame-working a larger tree with 25 or 30 different varieties… another advantage of frameworking.

Thank you – I do imagine it would be a lot less damaging to the host tree. Drop me an e-mail with your #, if you don't mind – we should talk homesteading. Definitely got some grafting questions for you. david at goodmanshow (dot) com

What are you going to graft to the Mulberry? And Where will you get the varieties to graft? Interesting concept.

I've been collecting varieties for the passt few years. Have 5 or 6 now. I'll cut the budwood within the next week or so, then keep it in the fridge until the rootstock tree out front starts leafing out, then I'll graft. Dormant buds on awakening tree = high success rate.