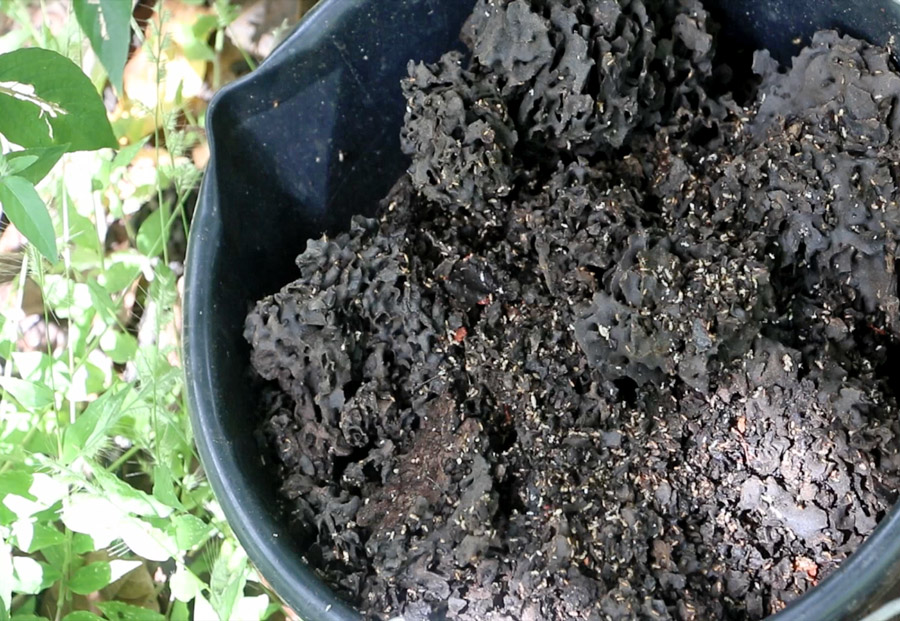 I read in an ECHO publication that you can use termite nests to feed crops.

Proving that a little bit of knowledge is a dangerous thing, that made me decide to do this:

These acts of Termitidae terrorism were perpetrated for the purpose of making potting soil.

I smashed us two termite nests over a tarp, then put the contents into a couple of buckets. Looks like good material for a garden… or for potting soil, doesn’t it? I mean, massive swarms of tiny termites aside.

I’ve made/stretched potting soil before and did a video on it a few months back:

That previous batch of potting soil wasn’t totally from scratch. So while looking around for good fillers, my eyes fell on the big conehead termite nests down in the cocoa orchard.

What I didn’t expect was how interested the local wasps would be in these termite nests.

You need to watch the video to see just how crazy things got.

Anyhow, I figured the wasps would clear out after they’d eaten all the termites. I was wrong.

Check out this update video I posted yesterday – the wasps are still at it!

Hopefully they calm down eventually. You can see the various ingredients I mixed to make potting soil, which leads us to

Mix ingredients together on a tarp, smashing occasionally with your feet. Try to avoid getting carried off and/or stung to death by the ravenous swarm of wasps eating the termite nests. Wait until night when the wasps go home and pot your plants.

At first I was happy the wasps were eating the termites, as my chickens were too dumb to come when I called.

Now, after a few days, as the crowd of wasps continues unabated, I’m concerned they may be eating up the termite nests themselves. Not sure. I talked to a local farmer today and he said something in broken termite nests always attracts the wasps.

I’m not surprised they keep coming as the termite nests smell surprisingly sweet, similar to a bee colony. That I did not expect.

Update on Growing Cherries and Almonds in Florida
Could You Fertilize After a Collapse?
Carving Out a Florida Food Forest From the Palmettos: Possible?
Using Seaweed in the Garden
The Beginning of My Mini-Orchard.