The Constant Waterer: A Film Excerpt 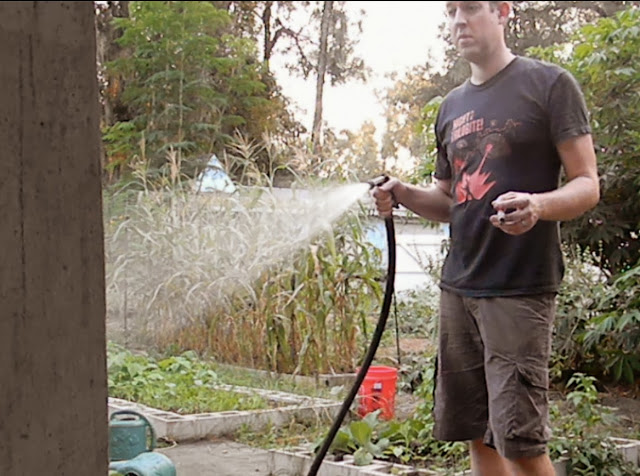 Observer #1: I hate his nonchalance. Can we not eat him like the others?

Observer #2: So THAT’S what happened to the others! I’d been looking for them.

Observer #2: Did you eat the cute one? The redhead?

Observer #2: Gorklack curse you, Brother Observer. I liked that one. She was rare!

Observer #1: Not when I was done with her.

Observer #2: Sometimes I loathe the partnership pressed upon us by The Collective.

Observer #1: Oh, you protest too much, brother Observer. It’s not that bad. I let you keep the infant creatures called by the name “possum.”

Observer #1: But you still kept them.

Observer #2: Yes, until the physical sensation called “odor” became too strong for my corporeal form to handle.

Observer #1: Yes, that sensation is rather… oh, look, our subject has a burning stick again.

Observer #1: Why does he enjoy them so?

Observer #2: Perhaps it is of religious significance.

Observer #1: Ah, like the Dance Of The Fire Ants they so often perform.

Observer #2: Exactly. It at least stems from a sense of the supernatural. But see the way he dangles the… cigar… from his lips? And how he waters constantly with such calm assurance that his own pathetic collection of chlorophyll-makers will survive?

Observer #1: Yes, I can see your irritation with this one. Though he does seem to have a gift of maintaining a collection.

Observer #2: Why didn’t you eat this one, brother Observer?

Observer #1: Too bony, brother Observer. Too bony. And he has an odor of smoke.

Observer #2: Speaking of “odor,” I think there’s still a decaying possum baby somewhere on this station… let us close the aperture and search it out. We’ll deal with the waterer later.

With a click and a smooth dilation of electromagnetic forces, the dimensional window closes. For a time.

Love Gardening? Take the Quiz!
A little gardening humor
Why Does this Terrify Me?
Torment
Not quite ripe...

Bro, Do You Even Vegan?

Yep, you need to come on down and get yourself an evergreen garden.

Thou art an unceasing temptress!

Cool. Or, as I learned yesterday from Stephen Fry, book. Very book.

"Book?" Doesn't have the same ring as "phat," but it's a little more hip than "rad" at this point.

Yeah, but it has extra meaning when applied to writing. Almost a double entendre.

If you want to hear Mr. Fry's explanation, it is here: http://www.wimp.com/evolvinglanguage/

Love the Fry interview, Arisia. One of the better diatribes on English I have seen in awhile.

David, this little vignette of yours looks not-quite-suspiciously in tone and setting like a little something I wrote 3-4 years ago at a certain Friday Challenge. I am honored that you chose to so emulate me.