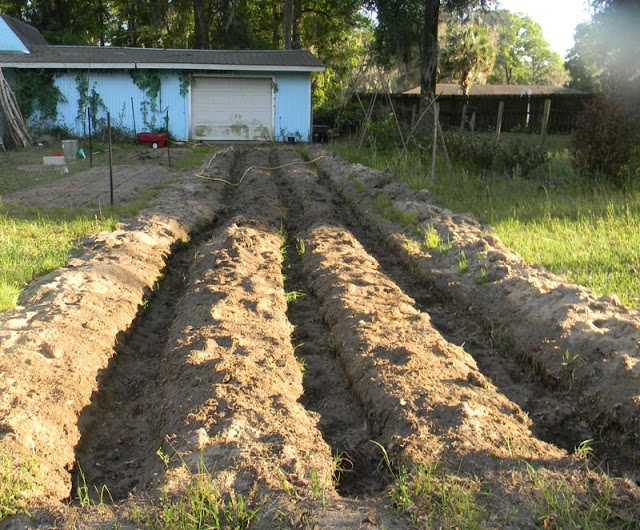 After all the work I’ve put into potatoes year after year, I still regularly get a poor potato harvest.

Or, in my case, the half-baked plans of one survival gardener.

You saw my giant potato bed in a previous post: Out of all that space, I was awarded a measly 39lbs of spuds. (My complete potato harvest, however, was roughly 100lbs, since I had potatoes planted here and there in my raised beds and in a double-dug bed.) Here are the three reasons I think this bed failed to give me an awesome yield:

1. Spuds were planted too late.

As I feared, we got spuds in the ground too late and they were struggling in the heat. Even though that was the case, we still got some – and for that I’m thankful.

2. Spuds were planted too far apart.

Yeah… I could’ve gone a lot closer with these puppies and the yield would’ve been greater. 12″ squares is about the way to go on potatoes.

I told you in my other post that this used to be a driveway leading up to the barn/garage. The ground, even though it’s sand, is viciously compacted. The bottoms of the trenches I dug were like sandstone. I believe the potatoes’ root systems would have greatly benefited from looser soil.

According to my best guess, this bed should have netted me about 200lbs of spuds. I’m going to address these problems and see what happens. A much smaller double-dug bed in the same hard ground did significantly better in per-foot yield, so I have hope.

After picking all the potatoes and throwing the stalks in the compost, we used our Meadow Creature broadfork (my review is here!) to tear up the ground. That took some work and some blisters, but it was remarkably fast compared to double-digging. It also made it easy to remove weeds. Once the ground was perforated and loosened, the weeds came right out.

After weeding, it was time to plant with a cover crop for the heat of summer. I chose mung beans, since they’re a bean I haven’t grown in a while – and because I really like the way they look. Mung beans, like their cousins the snake bean and the southern pea, are tough, drought-tolerant, heat-withstanding little dudes. These are the beans most commonly sprouted and marketed as bean sprouts in the grocery store. You can buy a bag of them from your local oriental market for next to nothing – and I’ve never had germination problems doing it that way. Half of my beds are now planted with mung beans – and the other ones are planted with experimental and staple crops like the Fast Lady Northern Southern Pea, a variety of Indian corn from the USDA, and sweet potatoes. It’s not that mung beans have a great yield – they don’t – but they do take some really high temperatures, keep the ground covered, and fix nitrogen. That means you’re not just growing a bean – you’re growing your soil’s fertility too.

And maybe… just maybe… that fertility will help me get a much bigger batch of ‘taters next spring. Well, at least you got something for your hard work. I can't even get potato seeds here. I've tried to see what would come of market potatoes I've bought and it didn't pan out. Looks like we'll stick to sweet yams. Hope your next planting does even better.

Yeah… I'd stick to winged yam, malanga, taro, sweet potatoes, boniato and cassava in your region. 🙂