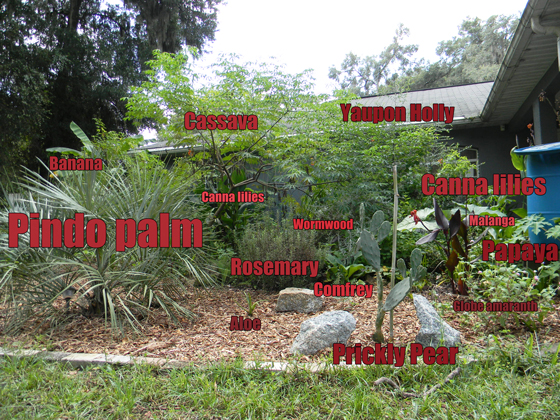 “Have you ever been told by a non-prepper that it’s not worth growing a garden “’cause if things get bad people are just gonna steal your stuff anyhow?”

That statement is made of fail. Fail, deep-fried and battered in fail, drowned in fail sauce with a side of fail. It’s like saying “why bother buying gold? People with guns will take it from you!”

Or better, “Why bother getting married? Marriages almost always end in divorce!”

Look… most people are idiots (MPAI). They make excuses for not prepping because they have inherent character flaws, like laziness, lack of self-control, and FAIL. You can ignore them.

However, if you are worried about people stealing your food in an emergency, consider growing some plants that most folks won’t recognize. The more they look like standard landscaping, the better. Mixing medicinal, edible and useful species together is a great way to NOT look like a gardener, while still feeding your family.

For instance, take a look at this patch of landscaping in my front yard:

Looks like a nice display, right? Got a little cactus… a little palm tree… some flowers and greenery. If you saw this, would you be thinking “FOOD?” Probably not. You’d just think the owner liked ornamental plants. Now here’s a look at the same patch with some labels in place:

Wait? What’s all that? Are those EDIBLE?

Well, most of them are. At the very least, they’re useful species to have around. Let’s break this thing down a little bit. In this pretty landscaping we have…”

Check out my book Create Your Own Florida Food Forest for more information on growing edibles, edible landscaping and creating an impressive food forest.

@The Prepper Project: 10 Great Ways To Fail At Gardening

I wonder if I could get edible landscaping in Fredericton NB, more for the novelty than anything else.