Home Composting Why Till Cover Crops Under?
CompostingGreen Manure 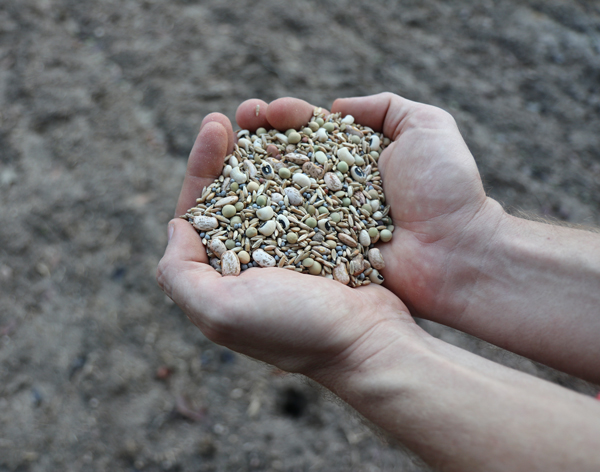 On my recent post about rye as a cover crop, Dan S. comments:

“Um… why would you till it in? Crimp it or chop and drop it, no problem.”

“Depends on your goal. If you want more nitrogen in the soil for the next crop, till it under at the right time. If you want a carbon mulch, chop it and leave it on the surface. You lose a lot of nitrogen with the latter.”

Also, not to pick on you specifically Dan, but you leave good comments. There is no need to put an “um” at the beginning. It just weakens a statement. Be bold. State what you are thinking directly – I will not be offended.

“Why would you till it in? Crimp it or chop and drop it, no problem.”

My internal editor greatly dislikes sentences starting with “um…” I am grateful, however, that you didn’t put an “lol” at the end. That would be way worse.

On cover crops, I am no expert. But I do know it’s not a matter of right or wrong in the case of tilling vs. mowing. It’s what you want the cover crop for and how you would like to manage your garden.

As Grow Organic writes in a short article on cover cropping:

The three main methods of cutting down cover crops are: undercutting, mowing and rolling. Undercutting is when you draw a blade under the soil and you slice the cover crop underneath the soil. For mowing you’re going to mow down the crop with your lawn mower a weed whacker, or a scythe. This chops the crop up fairly finely and it will decompose quickly. Rolling is basically running your tiller over the plants with the tines turned off. However, this may not always kill the plant and thus not decompose.

Cut it and Compost it

I love chop and drop. That is my normal method. However, I have also read a good bit on incorporating crops directly into the ground via tillage to rapidly build organic matter while holding nitrogen in the soil for the next crop. Tilling is very easy for me right now as I have access to a tractor. In Grenada, I only grew chop and drop as tillage was very difficult to do.

If you want, you can even let rye grow to maturity, then mow it and harvest the grain. The abundance of remaining straw can then be used as mulch or compost.

Yet tilling it under earlier when green – or mowing it and planting in the stubble – allows you to get your spring crops growing in a timely matter.

Just think about your gardening goals and go from there. It’s not an either/or.

As Dan S. wrote recently on a previous post dealing with green manure:

“Some people, still locked into only one way to do things rather than looking for the most appropriate way to get things done NOW. If it’s not wood chips purists, it’s compost purists!”

I completely agree. We have lots of options in our tool kits.

Um, I tend to use um when I’m questioning someone I generally agree with and respect, so it lessens the mental blow of the upcoming disagreement or expresses a lack of certainty about said disagreement.

A lot of people seem to struggle with anyone who disagrees with them, and the written word can make innocuous statements that don’t come across as mean in verbal conversations due to intonation and body language make me appear like a raging fart face.

So, um, hey, it’s good to know I don’t need to worry about that here.

I have rarely found that someone who starts a sentence with “Um…” is being genuine. Often they are trying to get you with a “gotcha.” Dan wasn’t, though, as he leaves good comments. Over time I have lost my thin skin. Receiving piles of nasty comments on YouTube will either make you strong or make you go mad.