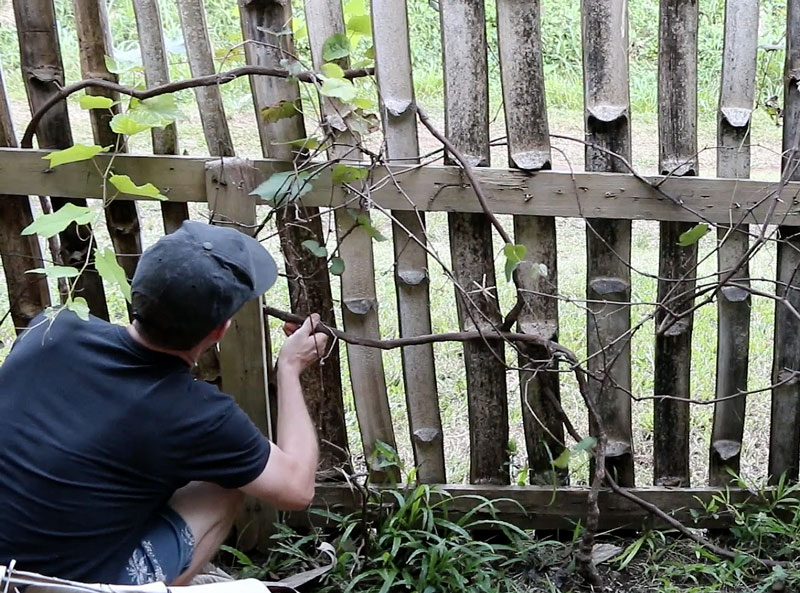 It’s about time to prune grapes again, at least if you live in a somewhat mild climate.

I made this video a few years ago showing how I pruned my muscadine grapes back in North Florida:

It’s not hard, except psychologically. When you’re a beginner it’s hard to take off that much vine!

Fortunately, I’ve gotten over that and have now pruned hundreds of grapevines, thanks to some work I did with my friend Dave Taylor at Taylor Gardens Nursery.

He’s the guy who explains how to grow muscadine grapes in this video:

There is a single grape vine here on our current property that hadn’t been bearing grapes.

A few days ago I gave it a brutal pruning and also chopped and dropped Gliricidia leaves and twigs around it as a slow-release feed for the roots.

Actually, around this time of the year it seems like it’s becoming a tradition for me to post grape-pruning videos…

If you have grapes and live in a warmer climate, it’s time to prune grapes. Get out there and get pruning before the buds break in the late winter and early spring.

UF has this to say about the time to prune grapes:

Canes are pruned short (3 to 5 buds), and many more canes are left per vine if the “clothesline” trellis is used.

If vines are not pruned at all, the number of clusters will increase, but the size of both clusters and berries will decrease so that only stems and cull berries are produced. Further, the length and width of the vines will make them more difficult to harvest or cultivate.”

If you live farther up north, you’re set for a couple more months so take the time to relax and enjoy your seed catalogs.

Great pruning David! I am about to prune my grapes here in Tucson AZ. My question is: I’m moving in April to the far SE corner of Tennessee, how would I take clippings of my grapes? I read a couple of posts about leaving a certain amount of buds on year old growth?? Not certain which is new and year old growth, and not certain how to proceed, I want to take as many as possible to replant there. Thanks in advance!! Stacey

Thanks David! My Muscadines were a first year planting last year, they didi great and actually produced 2-3 dozen grapes. I have been thinking for a couple of weeks about pruning them so this is very timely. I was worried with only one vine that i.e. would not do well, but there are wild grapes on the vacant lot next door, and a friend is growing grapes about a quarter mile away.