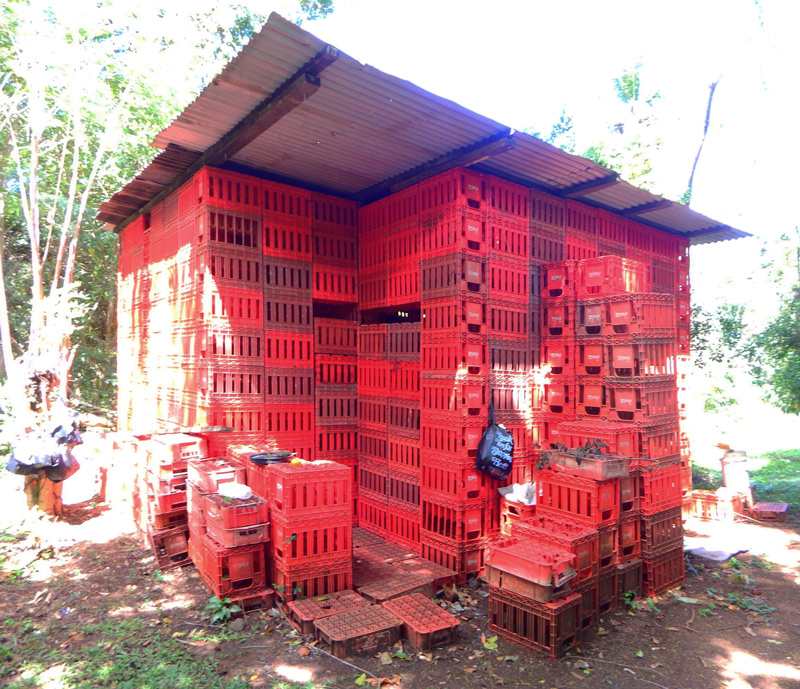 Yesterday I was invited to a neighbor’s farm to see his sugarcane plantings. As I’m always game for a farm tour, I spent a couple of hours visiting and talking with him.

As we walked down the main path together he said “David – how do you like my house?”

And there, surrounded by palms and jungle, I saw the strangest house I have ever seen in person. The entire structure, with the exception of the roof, was constructed from discarded Coca-Cola crates.

“I live humble,” the farmer told me.

I was impressed by his ingenuity. The indented portion to the left is his kitchen, the rest of it is his bedroom/living area. The door is just a stack of crates which he pulls in or out.

The kitchen has just enough space to walk into, with crates up to just over waist height as counters. To the back of the room is a gas double burner where he cooks.

Normally I wouldn’t put people’s houses on the internet, but he said “David, take a photo! Put it on Facebook if you like!”

I laughed. The man is proud of his work, as he should be. I asked where in the world he got the crates. He told me that a local bottling plant lost their contract with Coca-Cola and were discarding piles of them, so he was able to help himself.

The floor is also made of crates – the short, tray-like type that you can see making up the porch portion of the image above.

So far as I can tell there is no electric or water running to this property, though a river runs beneath it.

“Do you drink the water from the river, David?” he asked me, with a pitcher of water in his hand.

“No,” I replied. “I have heard it will make you sick sometimes.”

His brother who was sitting next to me chimed in, “Yes, it will sometimes.”

The farmer shook his head and laughed. “No – it’s good for you! You gotta drink it every morning! It’s better than the water you buy.”

He may have a point, as the city water is chlorinated – though I would definitely boil that river water before consuming it.

I asked if mosquitoes were a problem in his house and he told me they weren’t at all. My guess is they don’t like the bright red color, though I’m not sure.

“The house is always cool inside,” he continued.

I’m sure it is – the jungle is cool and the abundance of air flow through the crates certainly helps.

“How did you attach these crates together?” I asked. “Are they just stacked?” The crates are indeed all wired together. I tried to shake one wall and it was quite stable.

The farmer looked at me.

“Do you have poor people in the United States?”

“Sort of,” I replied. “People who don’t have that much money end up on government programs for food and housing and all that. They end up in areas with crime, standing in line for handouts. You can’t really get a piece of land and build your own house like this – you’d get in trouble. They’d say you were a terrible person and try to get you to pay for a septic tank and air conditioning and meet a bunch of regulations… and then probably take your children away if you had them.”

“When I was a kid I was poor. We used sugarcane to clean our teeth – I didn’t get my first toothbrush until I was 12.”

He effortlessly peeled a piece of sugarcane with a razor-edged machete and handed some to me. The juice was sweet and rich, full of life.

We walked down a ways and he started digging a yam a little ways up from the riverbank, carefully breaking away the clay with his machete to free the root.

“One day I’ll build another house down by the river. We’re clearing and planting now. It’s beautiful here. The river is my jacuzzi, you see! And there’s food everywhere.”

“I know,” I said. “I’ve also been digging yams and eating wild fruit.”

“I wish people ate that way more,” he said. “Everyone is eating fried potatoes and fried chicken now, instead of the good food all around. That’s why we’re getting sicker and sicker.”

I nodded and replied, “The soil here is excellent – anything fruit you eat is like a vitamin.”

“You could build a house like mine,” he continued, carefully lifting a perfect yam from the soil. “Or David – build a tree house! That would be even better for the kids. You or I – we could live in the trees and be happy. This is all you need. Even if a man lives in a castle it doesn’t make him happy.”

He’s right. A piece of land, some running water, a roof over your head… and you are in pretty good shape.

Growing Your Own Firewood with Coppicing

Love to here story’s of people that live for them selves and what makes them happy. were you so in ah over the house that you forgot to take pictures of the sugar cane. Love your story’s please keep them coming.

He’s got it made!! So many people here work all day to be able to pay for their house, which they barely get to even spend any time in, and they’re never really happy for all their hard work. All you really need is a place to be able to lay your head safety. We all want to be as happy and content as he is there in the jungle in his Coca-cola crate home.