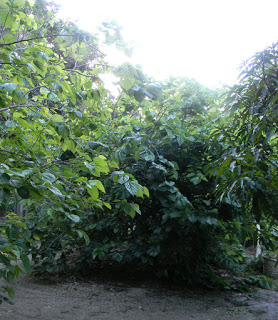 I confess: I am probably a bad neighbor.
No, we don’t blare dubstep or dancehall or ghettoslam (or whatever the current sonic terror may be) at 200 decibels…
And we don’t burn piles of tires and carpeting in the front yard…
And, most certainly, we’re not dumping diesel into the local creek…
However, we have – oh, the horror! – utterly given up on maintaining the front lawn on our semi-rural piece of the South; instead, it’s been replaced with a nascent food-generation machine.
Out with the lawnmower – in with a food forest.
The idea of a “food forest” or an edible “forest garden” is as old as Eden, but only in recent years has it started to make a comeback as a food-production strategy.
The concept is simple: instead of a patch of annual vegetables that needs constant weeding and attention, you plant a perennial forest of long-term edibles that can take care of itself for a long period of time with little or no intervention.
Take a look at a natural forest. It’s not planted in rows, it doesn’t have
patches of naked soil and it doesn’t need constant watering and
fertilization. Instead, a forest is a living patchwork of species
ranging from wildflowers and fungi to towering trees and soaring vines,
all hosting a wide range of animal and insect life.
If a tree falls it’s recycled into the system. If rain is delayed, the
trees still thrive by pumping water from beneath the soil via their deep
and ever-searching roots. If a cold snap ruins your spring watermelons
the forest shrugs it off thanks to layers of leaves and a canopy that
holds in warmth like a frost blanket. If one species succumbs to an
imported blight, another will take its place.
A forest, as Nassim Taleb might put it, is antifragile.
Front lawns are a classic example of boom-era resource mismanagement. Maintaining a patch of grass requires labor and resources while returning nothing. They are a time-eating green blanket woven from the dubious threads of conspicuous consumption, suited to a time when cars were big and women were slim, when ambitions were limitless and silver sky-searing rockets graced placemats at diners.
In a wheezing and syphilitic economy, attempting to hold up the aesthetic frivolities of a happier time makes about as much sense as welding gleaming tailfins onto your aging Honda Civic.
Don’t get me wrong: I do like the look of a lush green lawn… I just don’t
like having to pay for it and maintain it. I also like a friendly edible
forest much, much more…
(CLICK HERE to read the rest over at LewRockwell.com.

You have a point…but I do love my lawn, http://wp.me/p5T25X-4F, and I live in suburbia, so I really can't get away with food forest in my front yard…

my compromise however is slowly turning my back yard into one..