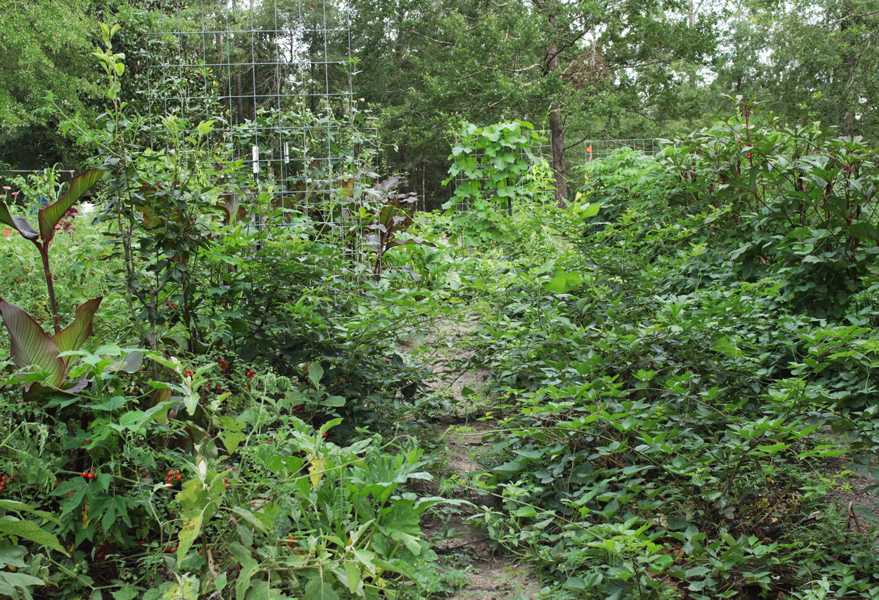 Joshua shares his Grocery Row Gardening progress and a question about pruning:

I had left you a comment a couple weeks ago stating that I was going to build our own grocery row gardens in Space Coast FL. 4 rows each 28 feet long. Well 28 yards of wood chip mulch and 10 yards of compost later and mission accomplished. I understand your disdain for woodchip mulch now baha. 28 yards *27 cubic ft/yd = 756 cu.ft. of mulch / 8 cu.ft. in a wheel barrow = 94.5 wheel barrow loads over the last 2 weeks. The mulch was piled high on my suburban driveway all the way to the road! Praise the Lord, last load of mulch was placed today. Oorah! I was able to pretty much eliminate all traces of grass in my yard now, so i parked my push lawn mower by the road and its gone now!

I’ve already planted like 15 varieties of cowpeas and 10 types of okra, 2 kinds of pigeon peas, cassava, and will be filling in the gaps with sweet potato vines slips I have growing elsewhere.

So I’m writing to update that I’m loving this method. The OCD straight lines mixed with the freedom and chaos of the method make both halves of my brain quite happy.

My one question is: Since its soooo scorching hot right now in my part of Florida and the rainy season hasn’t quite started yet, should I hold off on pruning until the end of summer? I’m worried that if I cut these trees back to the 18 inch mark right now, that they will shrivel up. Should I let them go until they go dormant and just hack em back in winter to proper form? I’m planning on wire/fan training several of them, and vase shapes for others.

Thanks again for your work.

P.S. My 5-year old is a plant geek just like his father, and he continually asks me to read your Grocery Row Garden booklet to him and explain what it all means. We finished intro together and are knee deep in chapter 1.

Your five-year-old is going to surpass all of us! Go kid, go! Please tell him that David The Good says hi.

I think your gardens are going to really take off. Wood chip mulch is a pain to spread around, but it sure makes nice soil over time. For perennials it’s impossible to beat.

As for the pruning, I think your instincts are right. Don’t stress them for now.

There’s another caveat I must share: pruning tropical trees isn’t quite the same as temperate trees. Stone fruit like peaches and plums respond well to vigorous pruning while they are dormant, as they wake up shortly afterwards as the weather warms and their sap rises, then they shoot upwards to the sky. In June, they reach their peak of growth and can then be pruned for vigor. If you chop them back around the summer solstice, they’ll lose strength and you’ll control their size.

With tropical trees that don’t really take off until the heat of summer and the pouring rains, things are a little different. I would think that since they don’t sleep, you can really prune at almost any point.

This agricultural bulletin from Australia on mango pruning notes:

“To develop a strong trunk the trees should be allowed to grow to over 1 metre in height initially. They are then cut back to a height of between 0.6 to 0.7 m. The site of first cut is important for the development of a strong frame. Mangoes grow in flushes, each flush is delineated by a concentrated whorl of leaves on the stem. This is referred to as a “ring of buds”, as a bud capable of forming into a branch is situated at the base of each leaf. If the cut is made above this “ring of buds” the resulting regrowth will be a feather duster effect of seven or more shoots developing. These would need to be thinned out to three or four if a good tree structure is to be attained. Even so this would be a weak point, prone to breaking during storms or strong winds. Below the “ring of buds” the leaves are more spaced out along the trunk. This is an ideal place to do the first cut (see Figure 1). It will ensure that the branches are well spaced out up the trunk and only three shoots will normally develop, resulting in a strong frame for future development. After the initial cut allow the three shoots to grow into branches of over 1 metre long. These are then cut back to about a metre in length, which will give you a good strong branch for supporting the growing tree. Again it is important to ensure the cut is below the “ring of buds” so only three shoots will develop. This should take care of any pruning necessary for the young developing trees. After this the trees should start branching by themselves. Young trees can be pruned at any time of the year. The aim should be to develop a spreading tree rather than a tall tree. Downward and inward growing branches or branches that cross over each other should also be removed.”

Jaboticaba trees are often pruned to reveal more of the trunk – and not necessarily cut back for height, as they are a small, slow-growing tree.

Also – I have almost never killed anything by pruning it. If a tree is moderately healthy, it’ll probably live.

I would probably prune everything tropical some time in July once the rains are falling well. Later pruning is more likely to give you tender growth which could be hurt by a freak frost.

Also – here’s my latest video from our Grocery Row Gardens:

When something doesn’t do well, keep tweaking!

Gardening in the Tropics: Pt. II
Pruning Mulberry Trees to Keep Them Small
Discovering a New Fruit: Genipa Americana
Are You Pruning Too Much?
Grocery Row Gardening Ground Covers and Other Questions
2 comments
PinterestWhatsappEmail

I Love This Look

Gardening in the Tropics: Pt. III

Working in the Little Row Garden

Joshua, nice to hear somebody in my area playing the same game I am. Not sure how I missed your original comment (since I never miss a post… or as my wife puts it “always hanging out with D the G.”), but I’m also in the 321 learning to grow. I’ve been spreading mulch for a couple months and buying more facebook trees than I can possibly fit in my little lot, so sounds like we are on the same timeline too. I hesitate to put my email in here (I get enough junk mail, thank you), but maybe our mutual friend, Dave, could pass it along behind the scenes? It’d be cool to pass some plants around, or even just some “here’s what’s working at my house.”