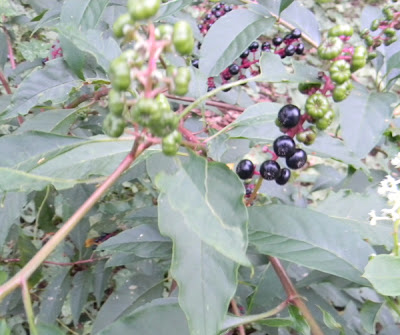 Gardeners usually complain about how bad weeds are, but today I’m going to tell you why they’re good.

“And six years thou shalt sow thy land, and shalt gather in the fruits thereof: but the seventh year thou shalt let it rest and lie still; that
the poor of thy people may eat: and what they leave the beasts of the
field shall eat. In like manner thou shalt deal with thy vineyard, and with thy oliveyard.” -Exodus 23:10-11, KJV Pokeweed: I love this stuff and let it grow wherever it wants.

Have you ever taken a close look over time at a construction side or a road-improvement project? The heavy equipment rolls in and carves up the soil, leaving long bare scars through the grass. When the work is done, the ground is a mess of naked earth and scattered rocks. But within a few weeks, there’s green everywhere. Look closely, however, and you’ll see the green usually isn’t the same as it was before. Where there once was grass, now there are weeds. Clovers, thistles, morning glories, pigweed… all kinds of species have appeared seemingly ex nihilo.

They’re doing God’s work. One plant is fixing nitrogen… another is accumulating phosphorus… a third is fixing a sulfur deficiency and others are simply adding humus to the soil as they grow rapidly, drop leaves,  make seeds and die.

Do you recall the John MaCrae’s poem “In Flanders Field?”

“In Flanders fields the poppies blow
Between the crosses, row on row…”

After the extensive shelling destroyed the ground during the Second Battle of Ypres during World War I, it’s related that the ruined landscape erupted into a profusion of red poppies… seeds that had been turned to the light by the explosions and troop movements… thriving in ground that had been wounded by the brutality of war.

Sometimes called “pioneer species,” the hearty weeds that arise and cover disturbed ground come from many sources. Some are blown in on the breeze… others fall in the droppings of birds… and many come from seeds long buried in the soil that awakened when the ground was turned and opened to the sunshine.

The principle of crop rotation and leaving the ground fallow is an ancient one. Repeated plantings of the same crop take the same nutrients from the soil year after year – and encourage the buildup of pests. But letting weeds (or different planned species) grow gives the ground a break and lets nature find its balance again.

I often use the permaculture “chop n’ drop” method of feeding my fruit trees. Tall weeds growing near a sapling persimmon? Get your sickle, chop ’em down, then throw them as mulch around the base of the tree. The weeds pull up nutrients constantly… and when you chop and throw them to the tree, you’re giving that tree the benefit of another plant’s hard work. I let pokeweed, shepherd’s needle, thistles and other “weeds” grow throughout my food forests for a variety of reasons, but the accumulation of nutrients for my cultivated trees is a primary one.

Weeds Are A Blessing

Next time you see a thistle… remember… even in the Curse God proclaimed over creation back in Genesis… He left blessings for us. Yes… they aren’t fun in the cornfield, but weeds are good for many other things and still have a worthy role in the maintaining of a healthy ecosystem.

Intercropping
"Dry" Compost Tea?
Interesting
Purslane Identification and Uses: A Plant Profile
The States in America Using the Most and Least Glysophate

I was pulling up weeds today, and looking at many with the thick, deep taproots and thinking what a perfect soil-aeration mechanism they are. When you have rocky, clay soil, that can only be a net plus. But those bible verses are just bizarre…so the poor and hungry get to eat once every seven years, while the farmers get to starve themselves at the same time? wtf?

No, doesn’t work that way. Heh. The farmers were always to allow “gleaning” post-harvest so the poor could eat.

[…] Nature does this all the time. The winter freezes come once a year and toast all the weeds, letting them fall down and rot into the soil, improving it. The Bible instructed the children of Israel to let their land go completely fallow one year out of seven. Weeds regenerate the soil, as I’ve written before. […]