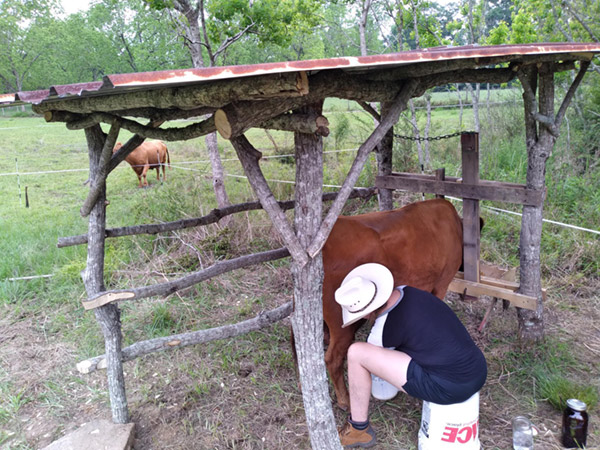 I visited my friend Elizabeth this week and filmed another video in her garden:

She wrote me afterward to say the video looked nice, but wasn’t a rich, vibrant green like my previous video at her place.

I told her it was because of the vintage Soviet lens I was using plus the cinematic color grading. I like the videos to look like they were high-end analog recordings from the 70s. It’s my look! 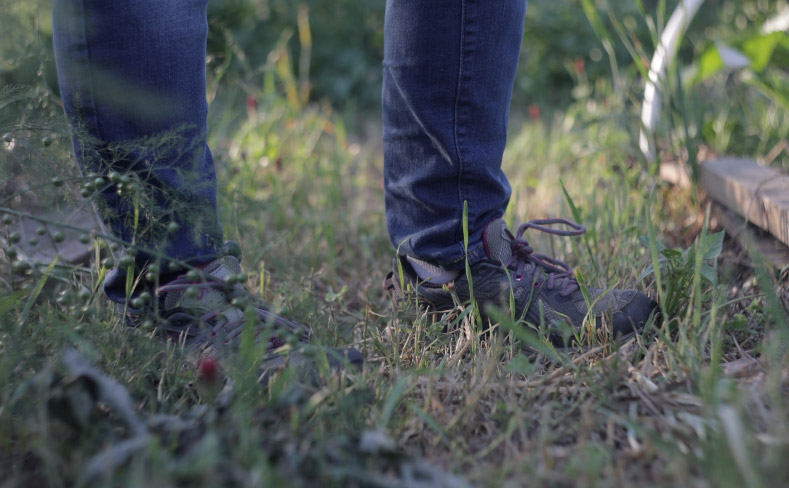 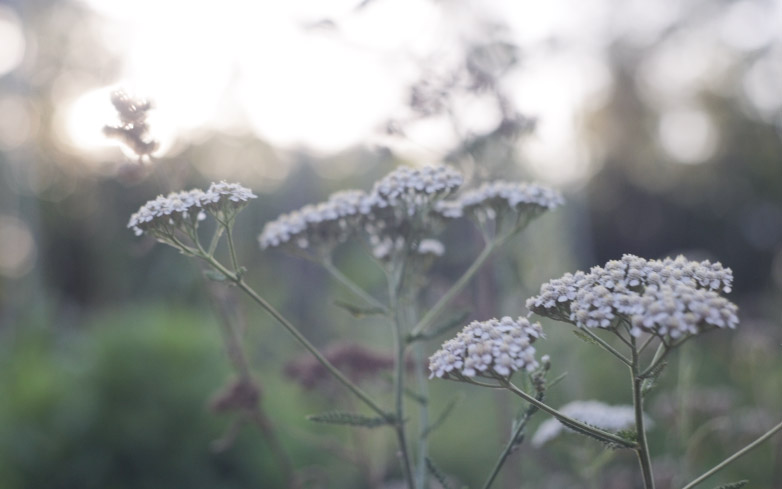 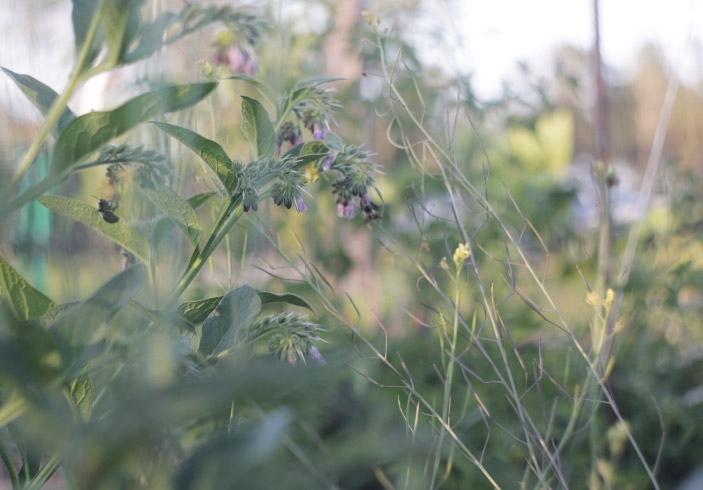 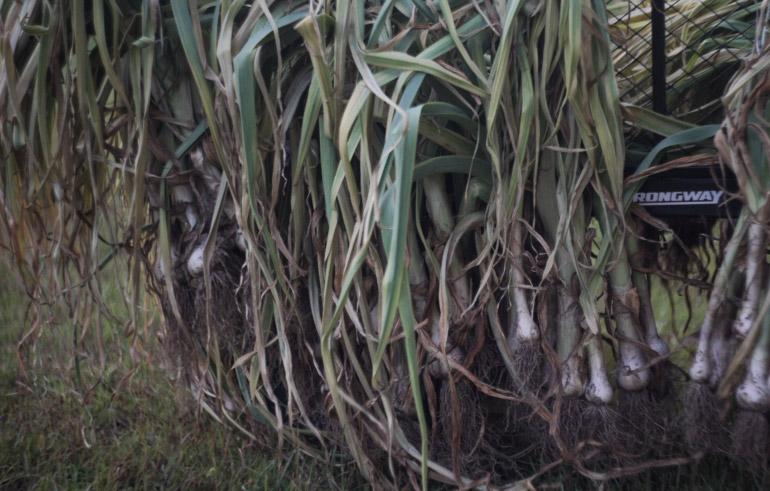 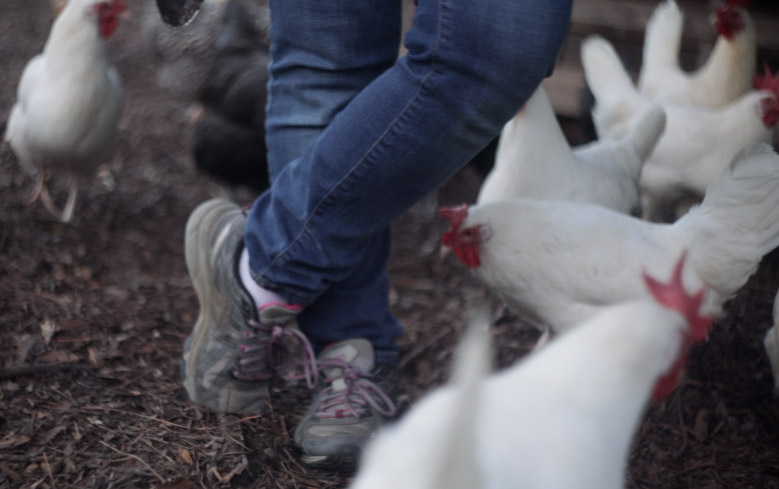 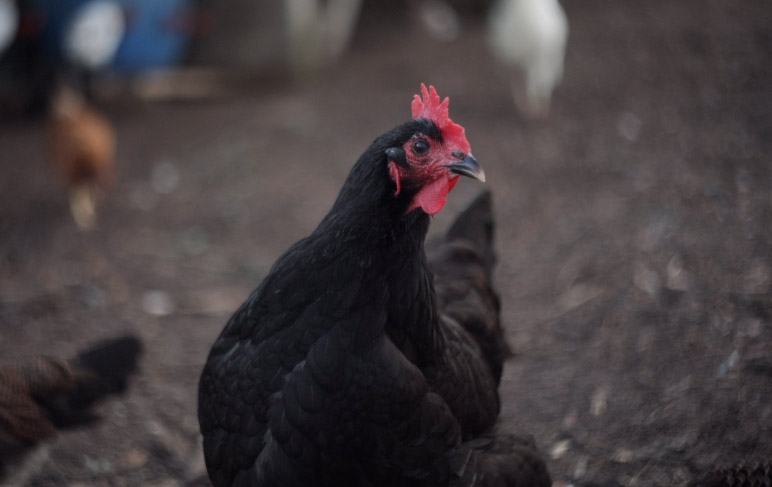 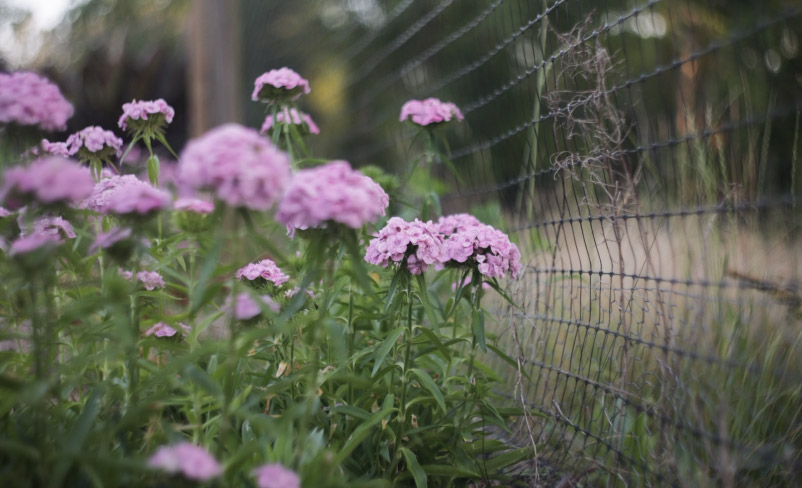 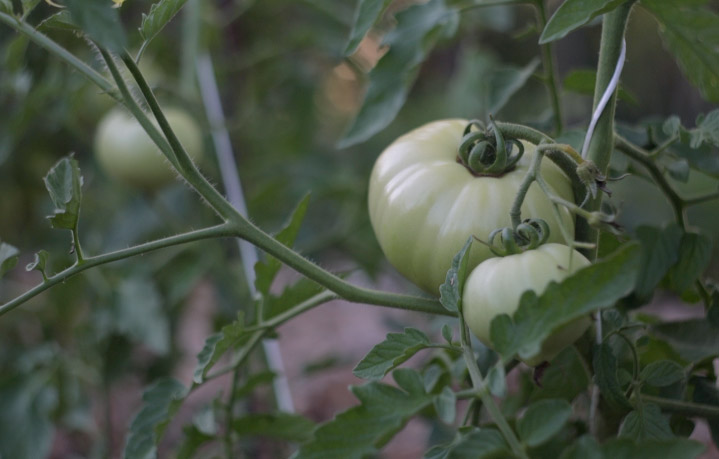 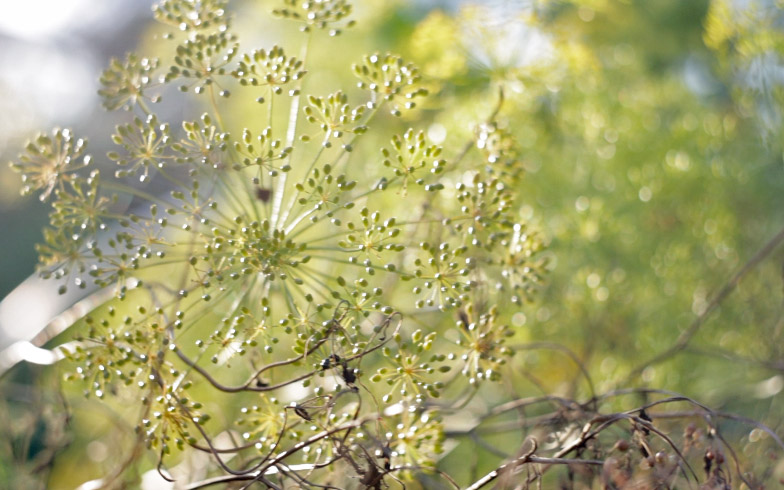 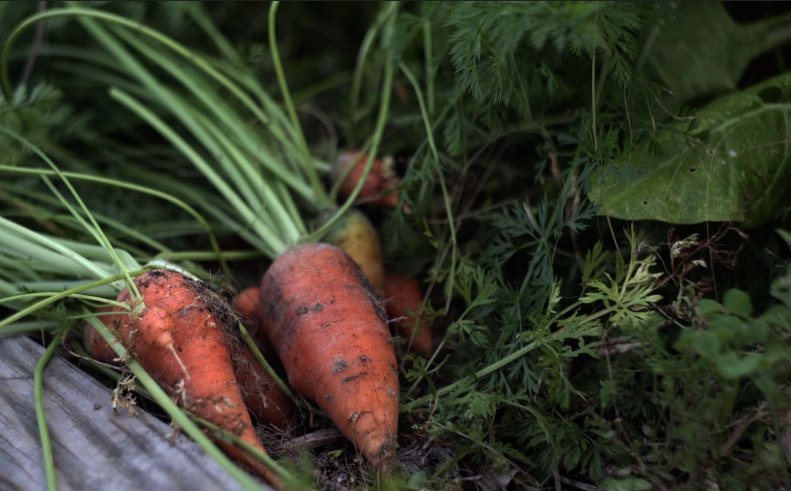 I deliberately run my camera with its internal settings set to minimal saturation and contrast, then I bring up the levels to where I like them in the editing.

But – weird artistic pretensions aside – this new video a great look at how she turned some terrible dirt into lovely soil and a productive garden through adding lots of organic matter and microbial life.

In other news, I haven’t posted much this week because we were busy with a new baby cow and getting a milking shed set up. 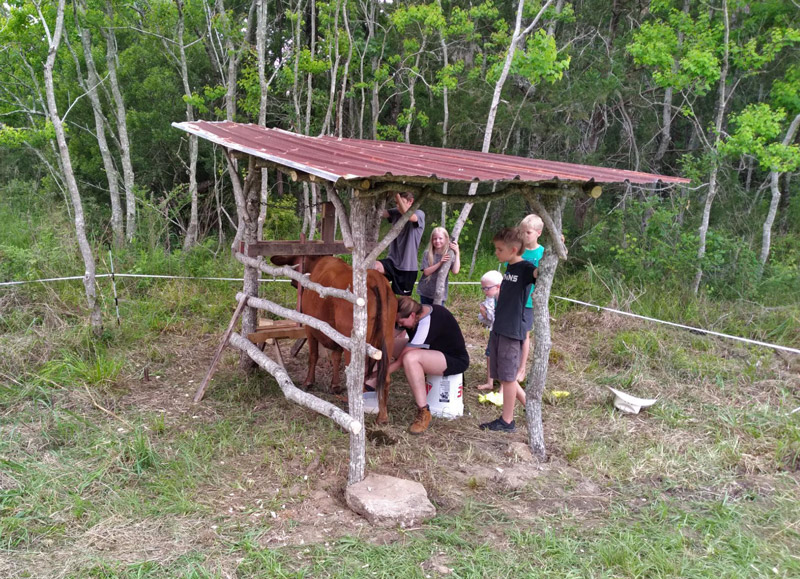 That is a picture of Brandy’s first milking. She still has her calf with her, but she still produced almost a gallon for us.

I made the milking shed from scrap roofing, pallet wood and felled popcorn trees I notched with my machete. It’s remarkably stable.

Here you can see the “head gate” we built to keep cows somewhat still as they are milked.

There is a manger in front which keeps the cow occupied: 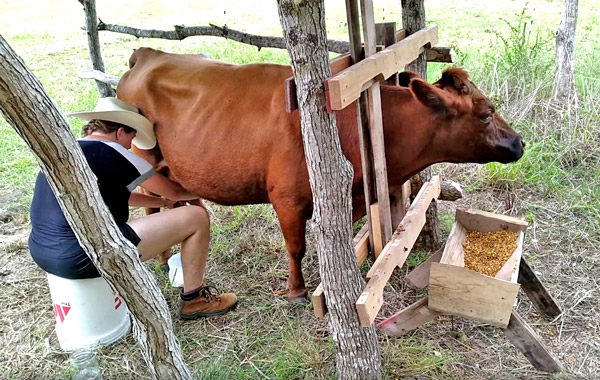 She is an easy cow to work with and let down her milk right away. Her willingness to be milked was impressive – she went right into the shed and contentedly munched grain through almost the entire process.

She did manage to kick Rachel in the leg and spatter her with manure at the end, though.

I need to make a milking stool next. Maybe early next week. We’re still trying to figure out how we’re going to separate the calf for part of the day to ensure a better milk supply.

It’s been a busy week but a good week. Have a wonderful weekend – I’ll catch you again on Monday.

God is our refuge and strength, a very present help in trouble.

Therefore we will not fear, though the earth be removed, and though the mountains be carried into the midst of the sea;

Though the waters thereof roar and be troubled, though the mountains shake with the swelling thereof. Selah.

There is a river, the streams of which shall make glad the city of God, the holy place of the tabernacle of the most High.

God is in the midst of her; she shall not be moved: God shall help her, and that right early.

The nations raged, the kingdoms were moved: he uttered his voice, the earth melted.

The LORD of hosts is with us; the God of Jacob is our refuge. Selah.

Come, behold the works of the LORD, what desolations he has made in the earth.

He makes wars to cease unto the end of the earth; he breaks the bow, and cuts the spear in two; he burns the chariot in the fire.

The LORD of hosts is with us; the God of Jacob is our refuge. Selah.

Another Garden Down: Aminopyralid Strikes Again
Self-Reliance Magazine: Melon pits, Sheet composting, and Compost Tea
Here's Why You Should Compost Right On Your Garden Beds!
Building a Pallet Compost Bin
Comment of the Week on Composting Meat
13 comments
PinterestWhatsappEmail

Free Door Made from Pallets

Humus does not exist in soil?

I love that you are continuing to grow your homestead as you grow your family. 🙂

Thanks. I figure we might as well keep growing and learning, even though we’re renting.

“God is our refuge and strength.” I looked it up. It’s Psalm 46, not Psalm 6. In your spare time, maybe add the 4. 🙂 Thank you for the scripture! I needed it. Blessings to you and yours!

https://youtu.be/W63ScR0TBgA . Old times series and this one talks about his way of separating calf for routine milking. Might be helpful.

Thank you very much, Woody!

I have a quick question. I got 2 peach trees and planted them. The leaves are falling off. I think I might be watering too much. How do I fix this? Will they die or do I just quit watering them for a while??

If they are totally soaked, quit watering them. Water every three days or so, unless you have swampy soil.

I’ve already got the beds marked out and today getting 10 yards of compost, and 16 yards of tree company dump mulch. (My backyard is straight construction grade sugar sand). Good chicken run dirt. Fertilizer mix, azomite, and seaweed wrack from the beach. One day I hope to add some biochar, clay, and perhaps calculate one of those steve solomon type mixes.

But its a start. So excited to try this new system alongside my other gardens and be able to have fruit trees in a small yard. Going to try my hand at espaliering, pollarding, fan shaping, and multi-tree-one-hold planting.

I really appreciated your Grocery Row booklet and your videos on it. Also your florida gardening books have helped me tremendously in producing pounds and pounds of Florida vegetables. I think as of 2-3 months ago, our family of 5 has eaten almost 100% of our vegetables from our little 1/11th property. Thank you for all of the advice and help Mr. Good. I pray that by some windfall of providence that you are one day able to buy the property that you guys have settled on in Alabama.

I also appreciate your enjoyment of the book of Psalms. They’ve become near and dear to me as well.

Thanks for helping me incarnate the ideal I’ve had of my family producing our food together.

This is going to be amazing! Thank you very much for sharing – cannot wait to see pictures! God bless you and your family.

We recently found you on You-Tube and love your show! Thank you for the entertaining way of teaching us about natural gardening methods. I started some swamp water but mistakenly added grass clippings that don’t want to sink to the bottom. I obviously don’t want to spread grass seeds in areas that I’ve removed grass. Think I’ll use this first batch on the shrubbery and trees and start over for the vegetable garden. Thanks for all the great ideas for us Florida gardeners. We are in 9 zone in North Florida, but had some pretty hard freezes last year down to 17, so now using plants recommended for zone 8. Seems if solar minimum is true that might be advisable. Your thoughts??? God Bless you and your family!

I think it’s a good idea to plan for cold weather. As for the grass, I usually just push it under with a stick repeatedly until it rots a bit, then strain it out later.