Whoa – These Potato Plants are HUGE! 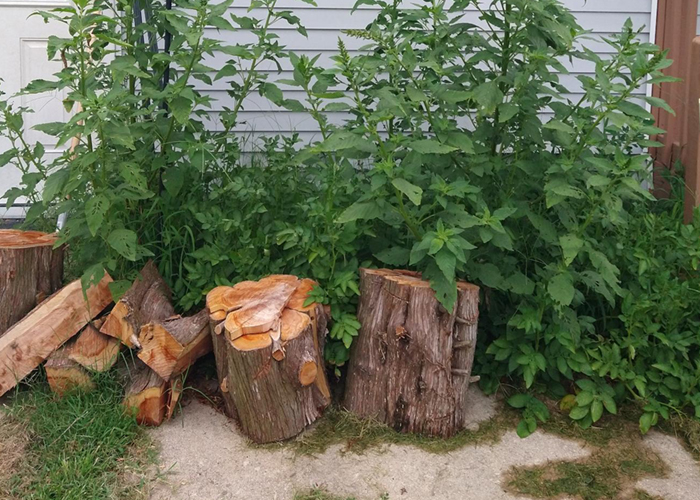 I got this picture the other day, of some HUGE potato plants: 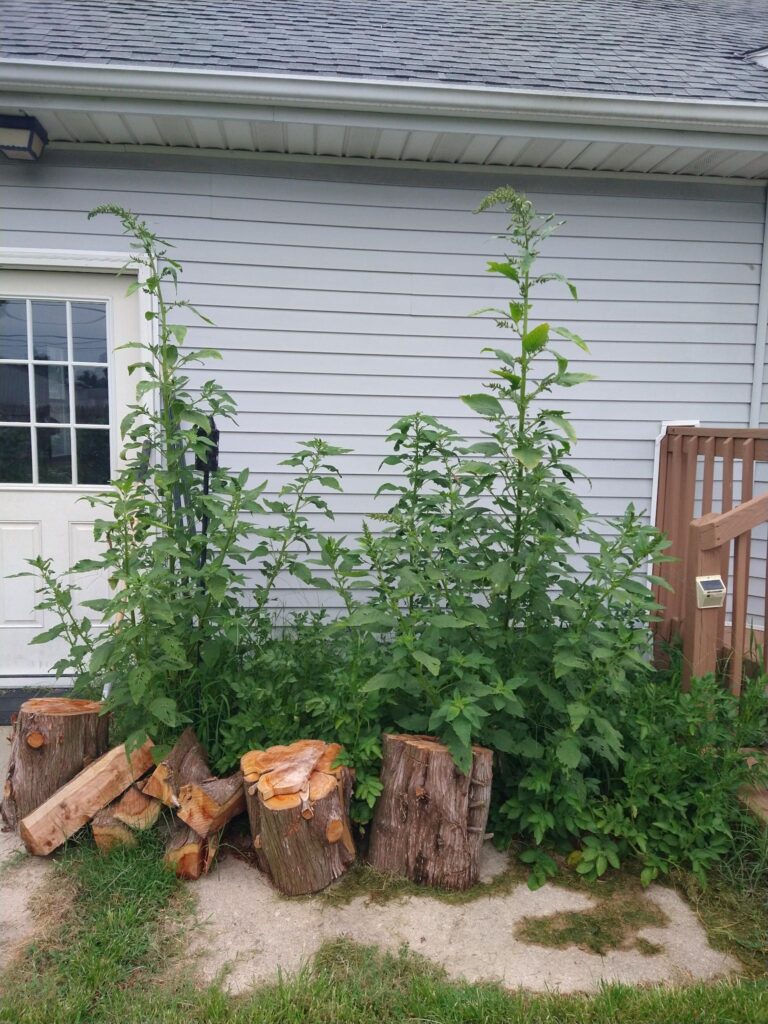 The owner was wondering when to harvest them.

However… on closer inspection… it became obvious that the plants were not all potatoes. Some interlopers were taking over the patch.

To make it easy to see, I marked out the potatoes and the potato patch invaders. 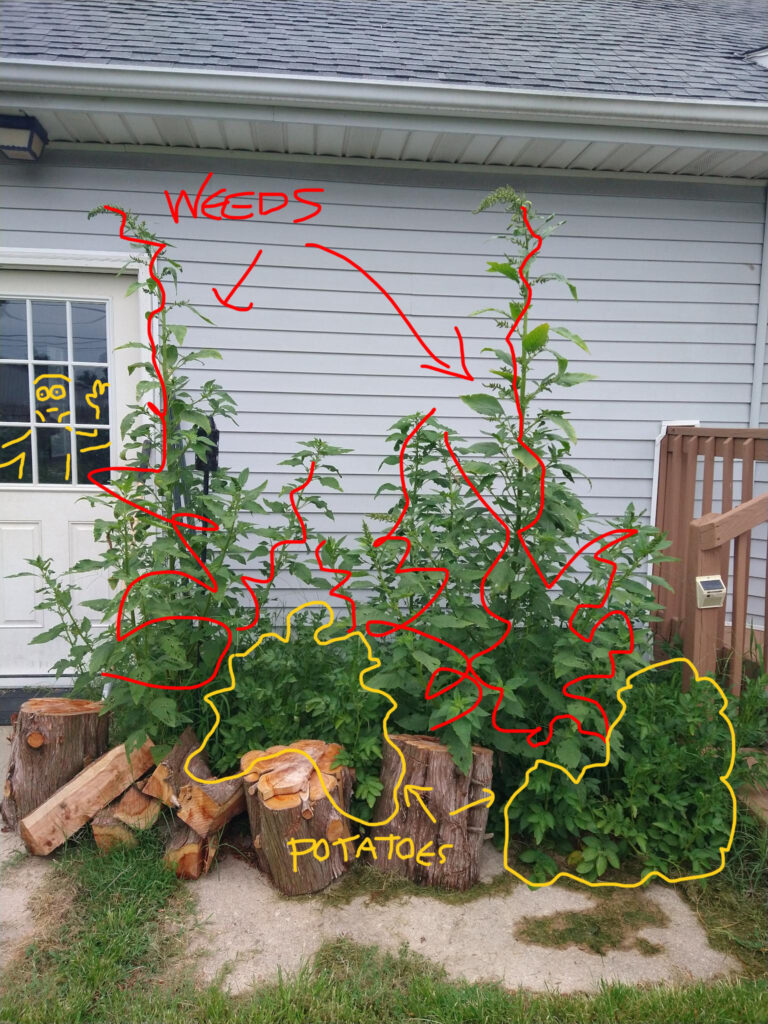 For new gardeners or for those growing an unfamiliar crop, plant ID can be an issue. When you have a bunch of green things growing up together, it can be hard to tell which are weeds and which are your vegetables.

That said, if you potato plants are over 6′ in height, there’s pretty much no chance they’re actually potatoes.

The gardener told me she would go ahead and pull the big weeds and give the potatoes some breathing room.

I advised her not to pull them, however, as they have their roots all intertwined with the potato plants at this point. If you yank ’em, you’re likely to disturb the potatoes and end your growing season.

Instead, I recommended that she just carefully chop the weeds down to the ground to let the potatoes outcompete them. Then, of course, she can compost her enemies.

In other news, I am going offline for a few days. We are scheduled to close on a new homestead tomorrow morning, so my office needs to be disconnected and reassembled in a new location over the weekend.

God is good, and He has guided us through in unexpected ways.

I will return to my regular video production and blogging on the other side. Thank you for the prayers and support – it’s been a tough month.

Answering Questions Live on Facebook TONIGHT!
April Fools!
35+ Homesteading Videos FREE to Watch (and I'm in one of 'em!)
YouTube Blues II
And it's not just you, trust me!

Should Have News Soon

Live in Loxahatchee – This Saturday!

Hooray for a new homestead! And closing means it’s YOURS, not rented. I hope you love it.

No more renting? Congrats! Looking forward to seeing what you do with the place.

Congratulations on your new homestead, may God provide all that you need for this next season. Our hope is in Him, Amen…

So excited for you and the family David. Take a break so you can do what you need to do. We will be here praying for you all and anxiously waiting to hear the details and see the new homestead. God is good!

May God bless your family in this time, as you have helped bless me with gardening motivation.

Great time to close, new moon today, energy is building. Be well, you are all in our prayers !!!!

Congrats! You and your family have been in our prayers.

If you’re not too far away, (hours and hours), I’d be happy to help you move. I have an 8 ft bed truck. I’m near Punta Gorda FL.

Thank you – we are moved!

Praying for you and your family, may you settle in your new place peacefully. I am excited and looking forward to this new chapter!
Greetings from Lakeland. FL!

Awesome opossum! Looking forward to the new homestead content, though it’s a new property it’s really not quite “starting over” you’ve been building your family, grow experience, not to mention cuttings/seed supply! It’s an exciting experience! WHOOP WHOOP GOD IS GREAT! -earthling drew

I am glad to hear you found a place of your own. Having to continually pull up stakes and move is hard.

The first year I tried to grow carrots I got an incredible germination rate, just phenomenal. I had trouble with cats digging in the garden and I was irritated that they had kicked the seeds out of the row. I kept thinning them and weeding them, and vaguely wondering why the roots were so pale. Eventually they started forming seed heads and I discovered I had been carefully nurturing a row of Queen Anne’s Lace.
That was more than a decade ago, an I finally got the courage to try growing carrots again this year.

That is hilarious! Wild carrots!

David, congratulations on your new homestead, so excited for you.
I just wanted to thank you for all the help you give gardeners especially the new gardeners like me!
I have read most of your books, but my favorites are @Totally Crazy Easy Florida Gardening”, “Create your own Food Forest”, and the one that made the most scenes to me because I’m new to gardening and wouldn’t know an edible plant from a non-edible plant (and I like some kind of order) The Grocery Row Gardening which I adapted and used in building my garden. I have a large standard lot 85×125’ it started out as a bamboo, pine and laurel cherry jungle and now and I have already planted half of the lot and always looking for more plants I don’t have. I also used hand tools to clear the lot. So from the bottom of my heart thank you for writing the books, your blog and helping beginner gardeners.
Again, wishing you and your family the best in your new place!

Thank you, Midge. You are doing great!

Sooo happy for you! I’ll be paying close attention….. I’ll be moving on to my land in September. I’ll need all the tips you’ve got!!! So exciting!!

Thank you for your knowledge and your humor!! Congratulations on the homestead and I am so looking forward to more from you!
We have 5 acres and you have given me inspiration to do something with it. All I have done is say, this is a nice plot, what to do with it all.

CONGRATULATIONS! How can we make donations to help with the new homestead? Patreon, PayPal, Amazon & E-bay affiliates program links etc.

I am so happy for you that you have a place that you can call your own. I wish you many happy years and abundant gardens in your new home.

Thank you, Laura. I never want to move again.

Congratulations and blessings to you and your family! The Lord is so faithful! We just closed on a new homestead as well and so we are in the exact same season! Looking forward to seeing all you do to your new home. We will be taking notes! Blessings!