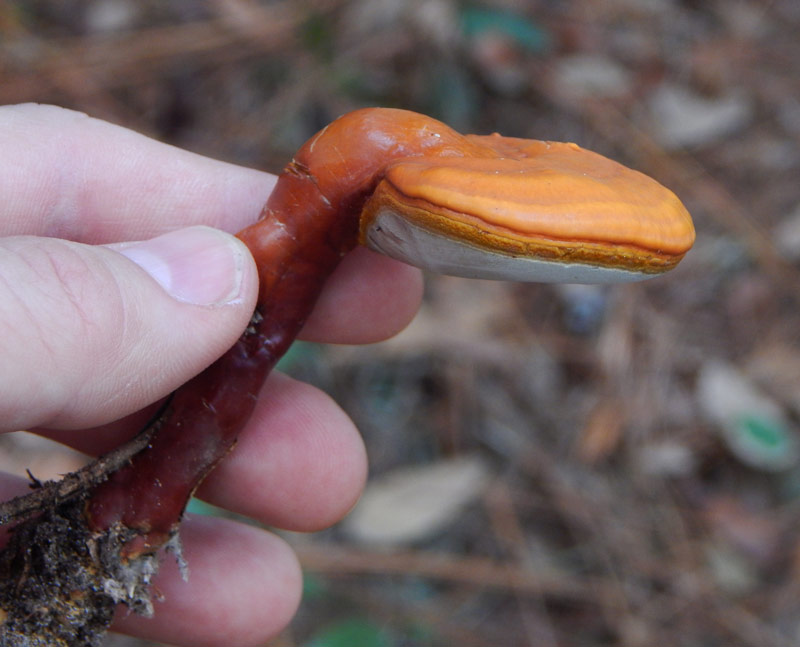 I was out with a couple of clients yesterday doing a horticultural analysis of a new property they’d bought, when one of the ladies picked up something and said, “what’s this?” That is a species of Ganoderma – known in Asian medicine as a “reishi” mushroom.

They feed on decaying trees. When we looked around, we found a half-dozen or more growing near the first one around the base of a dead oak.

Here’s one we didn’t pick: Though they’re non-toxic, they’re not at all good as a culinary mushroom. I’ve made them into tea by chopping them into little pieces and boiling until the water turns dark. It’s a bitter, earthy brew that’s supposed to be incredibly good for your immune system. I’m probably doing it wrong, though, so don’t just take my word on the preparation method.

Also, don’t go eating any mushrooms you’re not sure about. They defend themselves really well… meaning that many will kill you.

If you’re interested in growing your knowledge base and mushroom hunting safely, check out my list of the best mushroom foraging books here.

More details on my house and food forest for sale!

Bidens Alba is Edible and Prolific!

I do the double extract method with medicinal polypore mushrooms. Shred up and soak in alcohol to make a tincture for a couple of months, then strain and boil the solids in water for hours. Reduce the tea by evaporation and mix the tea and tincture together. That way you get both the water and alcohol soluble portions. Those look really nice. We don’t have that type out here.

Reply
The Marvels of the Rainforest: Cecropia, Insects and Ganoderma Mushrooms! - The Survival Gardener September 12, 2016 - 8:58 am

[…] have found these before back in Florida, though not the same […]