You can’t grow that here! You can’t do that! It won’t work! 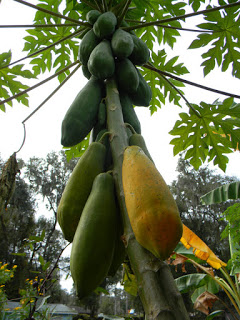 I laugh when people tell me one of my gardening ideas is impossible. Sure… some things are almost impossible. For instance, it would be really hard to grow Bing cherries here. Not totally impossible – but really hard. (To pull it off, you’d need a walk-in freezer, some shade cloth, a good timer, a very large pot and a lot of time on your hands. But I digress…)

I’ve heard this is too far north to grow good cassava. WRONG
I’ve been told that many seeds won’t grow into good fruit trees. WRONG
I’ve learned from experts not to compost meat, paper, etc. WRONG

Anyhow – you get the idea. Just because it’s supposedly impossible doesn’t mean you can’t pull it off. My experiments with microclimates have been very informative. I learned exactly how far out from my south wall I could plant zone 10 species before the frost claimed them (about 18″). I’m now growing tropical plants without cover outside in North Florida… thanks to the thermal mass of my house.

My experiments with planting corn directly into ruts cut in my lawn were a complete failure. But I learned from it. Now I’ve started my new “melon pit” experiments.

I started about 50 peaches from pits I took from the fruit of a Tropic Beauty tree and planted them in pots and around my yard. Will they live without the all-important “Nema-guard” rootstock? We’ll find out. (UPDATE: The answer is YES)

Look – the key to growing is constant experimentation and observation. Think like a scientist. Plant multiple varieties in multiple places at multiple times of the year for multiple different years. What worked? What didn’t?

Would you believe this? I have a tropical papaya seedling growing in my front-yard food forest. It’s seen multiple frosts down into the 20s and doesn’t show a touch of damage. Meanwhile, I have other large trees out back that have lost their entire tops and even had their trunks turn to mush. Why is that? Genetics? Microclimate? Canopy cover? I don’t know yet… but I’ll see if it stays alive and what happens this next year. If it fruits and keeps living, I’ll plant the seeds and see if they’ve inherited some cold hardiness.
If I had followed the standard advice, I would’ve never planted papayas
at all. YOU CAN’T GROW THEM HERE!

I’ve seen tropical avocados, papaya, guava and mangoes growing in a miniature food forest in Polk County. It freezes there and these plants don’t die. Because they’re tight together and tended by an old missionary who I believe has some sort of special favor from God… they live and fruit. THAT’S IMPOSSIBLE! Remember the rules. Go ahead and repeat them to yourself until they’re meaningless. Then laugh and go throw more seeds around. Do something impossible. The rules can be bent… nature is resilient… and you never know until you try… sometimes many times.

Buy my book Push The Zone for more information on growing plants in zones they aren’t supposed to grow in.

A Subtropical Fruit Tree Guild
My Craziest Video and Some Inspiration for You to Get Going!
Survival Gardening Indoors?
What I'm Thankful For
Psalm 42

Build Community and Compost Your Enemies

it might not be just the wall. it could have something to do with wind protection, leaky windows, and hot compost on the root zone.
could you do one on your techniques for starting (fruit) trees from seed?

And yes – I'll expand on my seed starting. I've got some cool things starting right that need their pictures taken.

I have owned a nursery for years, and always have people telling me that they do something you are not supposed to be able to do. I tell them Shhhhhh those plants didn't read the book so don't tell them.

That's right! Hey – post a link to your nursery if you get a chance. Love to see it.

I rinsed and dried seeds from a papaya I got at publix. Yep. Publix. Out of fifty seeds four sprouted. ( in pots.) I have papaya for myself and all my neighbors…going to have to jar and make jelly!

They’ll germinate a lot better if you don’t let them dry out. Just plant them right from the papaya, pulp and all. Some tropical plants are like that.