Home Homesteading What is the Best Wood Finish for Tool Handles?
HomesteadingTools

What is the Best Wood Finish for Tool Handles? What is the best wood finish for tool handles?

That is a can of worms, but today I’ll give you a few ideas you can test for yourself.

A few weeks ago Steven at Skillcult posted a video on his axe handle oiling system and wrote:

“It took me many years to finally arrive at a very simple but effective system for oiling axe handles.  I’m pleased to say that Author Dudley Cook came to the same conclusion and recommends pretty much the same as I do in The Axe Book.  This is the first of a series I hope to continue of super accessible bullet point videos called 2:00 Minute Technique.  The idea is to deliver very useful information in two minutes or less.  Of course being rather thorough most of the time, most subjects will be covered in more depth as well, but these will be quick start guides with enough information to get to work.  I’m also linking the long version of oiling tool handles where I talk about drying v.s. non drying oils and geeky stuff like that.

This system penetrates the handle deeply.  How deeply I don’t know as I haven’t sliced open a handle to find out yet, but it has to be pretty deep considering all the oil some handles are capable of sopping up.  It probably builds up especially a lot in the outer rind of the handle wood.  I think of it as replacing water that was once in the living tree.  As long as you use a good drying oil, like linseed, it will cure to a tough plastic like substance, the same stuff oil paints are made of.  I use raw oil because it has a slower curing time allowing for deeper penetration before the oil on the surface seals off the pores.  The other reason I use raw is because the product known as boiled linseed oil is not boiled linseed oil at all, but rather a compound containing solvents and toxic metals to the end of decreasing curing time.  I’ve actually gone now to using food grade flax oil only (same as linseed oil,  but food grade is usually called flax oil).  The last can of “pure raw linseed oil” I got smells of solvents, so I just found the cheapest flax oil I could on amazon and ordered that.

There is concern among some that raw linseed will never cure enough and will remain sticky.  I’ve been using it on my handles for a long time and it cures out plenty well.  Whether it will cure as hard and tough by comparison to boiled I’m not sure, but it’s definitely more than adequate.  I can assure you of that.

I see “oil finish” recommended a lot, like Watco or Danish Oil Finish.  As far as I know, they are all cut with solvents and dry quickly.”

He writes a lot more in his post. If you want in-depth knowledge of a topic, Steven is an excellent source. I am a fan of linseed oil as it’s an integral part of my oil painting hobby.

But is Linseed really the best wood finish for tool handles?

Herrick Kimball recommends a tool handle finish call Pat Gorham’s Hoe-Handle Rub and explains how to make it in his book, and here on his Classic American Clothespins site:

“In The Planet Whizbang Idea Book For Gardeners I have a short chapter titled How to Make And Use Pat Gorham’s Hoe-Handle Rub. Pat’s recipe for hoe-handle rub is an old-time, all-natural wood preservative. I’m going to explain how to make yourself a small batch of the paste here so you can use it on your clothespins, in which case it’s not hoe-handle rub…. it’s Classic Clothespin Wax! 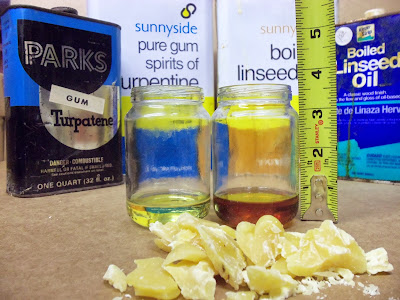 I really wanted to make this hoe-handle rub and use it on my tools. I had the wax, the turpentine and the linseed oil… and then I moved before mixing it up for a trial.

I think the beeswax would go a long way towards increasing the wood’s ability to resist decay.

Another option for finishing tool handles is explored in this post over at Dailey’s Wood Works:

“I started with a $3 sledge hammer that I picked up at a garage sale.  It was rusty and the handle was dry, rough, and dirty, but at least the head was still firmly attached.  I sanded off all the original varnish, grim, and filth and got it to smooth bare wood.  Now I started applying the coconut oil.

Coconut Oil is typically solid at room temperature (~75F) and melts at around 80F.  I did this project in my shop in August when it was 100F.  My coconut oil was very viscous.  I applied it with just my fingers.  I wiped on a coat and left the oil sitting on the wood, not wiping it away, this was about 7pm.  I came back in the morning and found the handle dry, so I repeated the process again.  This happened for about 2 days or 5 coats 12 hours apart.  After 3 days the oil took about 24 hours to soak in completely and dry out.  The hickory handle was now a beautiful color and it was silky smooth on my hand.”

I have used coconut oil myself, as well as bacon fat and lard, but – as also noted in the post at Dailey’s – the long-term strength of the finish isn’t known. Linseed oil is also known as a “drying oil,” whereas coconut oil is a non-drying oil. The wood really drinks it in, though, so I never had a problem with my tools being oily. I had to re-oil every few months, though, as the wood seems to be thirsty again at around that time.

I have no idea where the oil goes. It just vanishes. I don’t know how many times I oiled this particular hoe with coconut oil but it drank it.

The hoe in the image is one of my go-to tools.

The handle on it is a reclaimed broomstick which isn’t ideal, as a varnished tool handle is slicker and may take more energy to grip than an oil-finished one.

It also cracks and wears off unevenly over time.

Interestingly, though – it doesn’t stay unfinished. I’ve handled one of the machetes a local farmer was clearing brush with and noted that the handle had been polished and oiled quite nicely by his hand. Long usage had beautified, darkened and smoothed the wood.

Looked like a pro polish job. I wish I had a photograph.

This may be an option for you, though if you’re like me and sometimes (okay, often) forget your tools outside, well, oiling them or using hoe-handle rub is a good idea.

So – what about you? What’s the best wood finish for tool handles in your opinion? Let me know in the comments. I’m going to try Steven’s method for now, then if I can find some beeswax I’m trying the hoe handle rub.

I don’t delve into academic gobbledegook!

A DIY Rocket Stove Smoker for the StoveTec...

My only experience is with raw linseed oil. Which I love. It smells nice and I don’t mind getting it on my fingers, because it doesn’t contain harmful substances. I wouldn’t have thought coconut oil could do something similar, but unless you live in Coconut Country, it’s probably more expensive to buy than raw linseed oil.

Yes, and I think the linseed lasts longer. I love that linseed too.