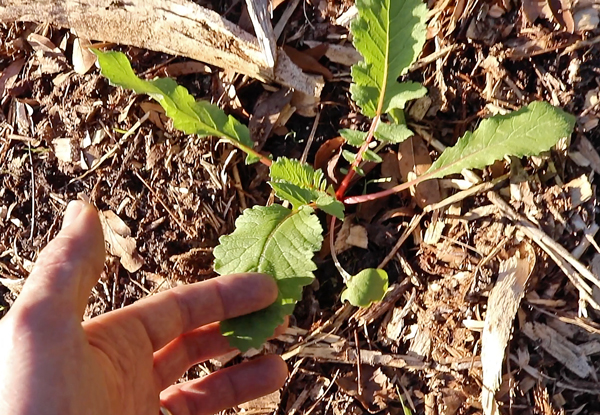 Yesterday I posted a video update of the 12-bed garden amendment experiment:

Steve wrote me to share further instructions on use of his fertilizer mix, including the following information:

“Compost, animal manure and mulch release substantial amounts of plant nutrients as they decompose but their major plant nutrients—nitrogen, phosphorus, potassium, magnesium and calcium—are out of balance. These materials do not provide nearly enough trace elements. Municipal waste compost, which is what most landscape yards sell, provides way too much magnesium, insuffi cient trace elements and sometimes excessive amounts of zinc. Veggies fed this way do not achieve full flavour, lack disease resistance and will be more often attacked by insects. They are far less nutrient-dense than they could be. Repeated heavy applications of manure or compost over many years creates toxic excesses of plant nutrients; then the garden grows less well than it did initially. And the health of those eating from that soil also fails to improve to the degree the gardener hopes it will. Solomon’s Gold allows for the amounts of plant nutrients that will be released from a layer of ordinary compost 15 mm thick that is applied once a year. That thin layer of compost is more than enough to keep the soil biology vibrantly alive, which brings great benefits to plant- and soil health. More compost than that eventually worsens the situation. Less than that is not enough. Please do not try to make your crops grow fast by feeding them large quantities of compost or manure. Instead, feed them Solomon’s Gold. If a basic dose of our fertiizer fails to make them grow as fast as you hope they will, then top dress more.”

Obviously, Steve’s fertilizer mix should not be applied all alone, though the same should be said about DFSW, urine, Dyna-Gro, etc. With compost, all of these beds would be doing better. We’ll get to the next stage of this experiment soon, once the fall beds are done, then we can apply an equal amount of organic matter to each of them.

Or I could just do it now. What do you think?

Expanding the Garden to Jam in a Bunch of Onions

I’d do it now. I think you’ve established that the nutrient additives don’t do much without significant organic matter.

I will be very interested to see if some of the nutrient mixes start pulling ahead of others once they all have more organic matter.

I was amazed at the boom that a little urine caused in my own beds, but that was in raised beds with excellent soil built up over time. Evidently it just needed a kick of nitrogen. Your beds need much more.

Thank you for doing this experiment. Not nearly enough controlled gardening tests like this have been done and shared.