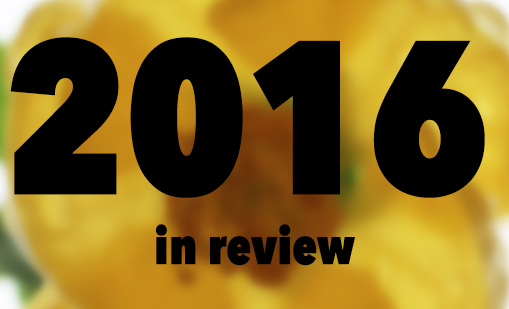 It’s time yet again for the annual “Year in Review” post!

Unlike previous years, in February I quit weighing the produce we harvested because we spent most of the year in a rental property and transition from Florida to the equatorial tropics. I also had to leave my scale behind when we moved overseas.

Don’t worry, though – I just got a new one this week and I’ll get back to tracking yields once I get a new homestead operational.

Here are the yields from the first two months of 2016:

After those first two months, we sold our property in North Florida and moved to Ft. Lauderdale for a month, then flew out of there to the property we now rent in Central America.

Here we walked into an operating homestead with lots of bananas, plantains, cocoa, mangoes and various other fruit trees.

It feels like cheating. We’ve certainly harvested near a ton of bananas and plantains, plus just the wax apple tree alone has made baskets of fruit. I’ve also dug near 100lbs of wild yams in the jungle.

I’m going to hold off on further yield tracking until I get a property of my own and can start from scratch again with what I plant.

I had a goal at the beginning of the year to get three books published, plus a booklet. All I finished was the booklet. I have three first drafts of three different books sitting on my hard drive right now, all of which need to get published.

The editing and illustration takes time and moving to a new country, doing paperwork, trying to get established, etc., has been time consuming. I put a lot of things on hold, including my book writing.

I also managed to cut through two tendons in my left hand, thanks to a coconut-opening accident with my machete.

That accident really set back my writing as well, as it kept me from typing well. I was almost back at hunt and peck levels.

Another failure of 2016 was our purchase of a car. We had an importer get us a 2003 Toyota Noah from Japan. It ran fine for less than two months, then the engine failed on the way up our road. Totally failed, as in the mechanics tell us it needs to be replaced.

This is insane. We paid roughly $11,000 for this car, thanks to the high cost of import duties and taxes. Back in the US that would have bought me three cars. And now it’s dead… and because everything runs slowly here… it’s been sitting in the shop for over a month and isn’t getting fixed. Apparently they’re hunting for a new engine.

I don’t make enough money to take these kinds of losses, so this was a major failure. Multiple people told us to go the import route – and we got screwed. And the screwing is ongoing, as I’m walking a couple of miles to buy groceries, we can’t go anywhere as a family, and we’re going to have to pay a lot to get this piece of garbage fixed.

It’s a good thing I rather enjoy taking the bus. I’ll probably be doing it for months to come.

After being told multiple times that forums would be a good idea, I finally bought some software and set up forums.

I rapidly discovered I had neither the time nor the inclination to keep forums running. They’re currently a spammed up mess and need to be deleted. It would work if I had someone else to run them but I just don’t have the time.

Broken vans and machetes be darned, it’s time to talk about the good stuff.

We Got Out of Dodge!

I count finally making it overseas as a great success. I tried to get out of the US for almost a decade before we finally pulled it off. And here I am, relatively established in a new nation. I managed to get a visa, thanks to my agricultural work, and I truly love where we live. Especially our neighborhood.

This is my kind of place:

Always fun. And it’s beautiful around here as well: I liked North Florida, but this is paradise.

Instead, I made it to almost 12,000, thanks in large part to a challenge I was given by Justin Rhodes.

I produced 208 videos for YouTube this year. That’s pretty amazing.

This was helped immensely by an anonymous donor who paid for me to upgrade my camera to a professional model.

The Canon 70D has been great. I just got some new lenses and a pro video tripod for it as well, so 2017’s videos will be even better.

I Participated in 2 Homesteading Summits

In February I took part in the 2016 Home Grown Food Summit with Marjory Wildcraft.

My video was one of the most popular and I later released it for sale as a standalone download.

Then in November I contributed another fun video to the fall Mother Earth News Online Summit, this time on Better Gardening through Experimentation.

I hope to offer that film as a standalone download soon. It was also a favorite, ending up in the top 5 presentations out of over 30. What an honor!

The newsletter is entertaining and non-spammy. I cover bits and pieces I don’t over here, plus announce book projects and share cool pictures.

Back in October I announced that I was done posting every weekday, after 4 years of hitting that goal. I posted once a week for the next month or so, then started creeping back up towards daily.

I can’t stop. It’s just built into me now.

The Get Grafting! Film

My instructional film Get Grafting! was a complete success.

You can download the film here for a donation of any amount.

How to Grow Turmeric

How to Grow Yams

And, the most popular of them all:

This Compost Will Destroy Your Garden

It’s been a heck of a year with a lot of challenges and excitement.

Though I sold my North Florida food forest property, I learned many lessons from it that I can apply to my next property. And I made a profit when I sold, which is great. Sometimes you really wonder if putting in a food forest is a good idea… after all… what about property values?

The new owner of my food forest bought it FOR the food forest, so not everyone is a Philistine! She tells me she’ll be sending a video update in 2017, which I look forward to sharing with you all.

All in all, 2016 was a great year and I hope you did well with it. If not, there’s always next year. Let’s face it together and conquer! See you on the flip side,

“You see, David, you’ve really had a wonderful year.”

Thanks for sharing the up and down adventure of your life with me (and the rest of the world) via your growing multimedia productions.

Re: the books… I would say that getting one book or booklet a year done (along with everything else) is very commendable. I have written 12 books thus far and remember thinking long ago that I would crank out one a year for the rest of my life. But it didn’t work out that way. Most people do not realize the enormous amount of work that goes into even a little booklet.

Here’s wishing you, Rachel, and all your Good children a safe and productive year in 2017!

Congrats on the move! That’s a huge accomplishment.

And sorry to hear about the car. I hope this isn’t twisting the knife too much, but you got some really bad advice. I would not import a car if minimizing the cost was one of my goals. SUVs (and more recently big cab pickups) are de rigueur in Central America. If you didn’t want an SUV for whatever reason, you should have gotten a microbus. E.g.:

Pretty sure you could have gotten a much better value for your $11k outlay.

Anyway, I sincerely hope you and your family have an incredible 2017!