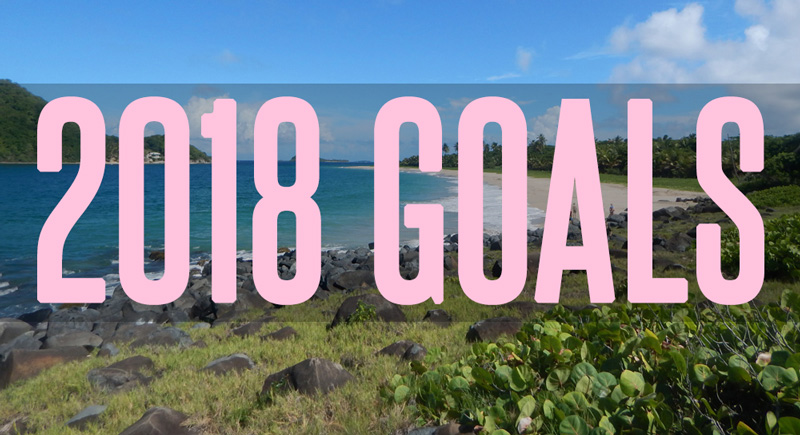 Last year I made a goal to publish three new books. Unfortunately, I only managed to publish one – and I’d written that in 2016. Thanks to a wrecked car, I spent an inordinate amount of time taking the bus to grocery stores. I also did not have an office of my own, so I worked in the house surrounded by children and noise. And I had bad internet.

Now I have a car, so no more long bus trips. And I have my own office and decent internet.

The Southern Beekeeping book has been held up by my co-author who is really busy. However, I got in touch with him this morning and he’s ready to wrap it up. Heck yeah!

I’d like to write Tactical Gardening this year, plus do a re-write of Totally Crazy Easy Florida Gardening including what I’ve learned from talking with Steve Solomon in 2017. We went back and forth on a book project but it had a lot of overlap with my current book, so I may just incorporate what he shared with me into a new, expanded version of that one.

Also, this is the year Turned Earth: A Jack Broccoli Novel comes out. The third draft was re-written last week and sent to an editor, plus I’ve contracted and illustrator for the cover and interior. It’s going to be awesome. My publisher will release it this year.

There’s a quarter acre plot about a block from our new place which may be available for me to plant on. Last year I made a goal to buy a new homestead but that simply didn’t work out. Land is expensive and I don’t believe in debt, so we’re renting for now. I’ve given up on buying for the time being. It’s in God’s hands. Not owning land is fine with me so long as I have a place for my yams and pumpkins. And that segues into Goal #3.

Part of me wants to “not bother,” but I’ve also told people I’m going to see what I can do on gardening in a small space. The main reason I don’t want to bother is because I want to get more work done and I also don’t want to set up a bunch of containers I may have to move in a year or so. But who knows? I should just go for it, one container at a time, and see how I can tweak the system to give me good yields. Then write a book about it, of course.

Close enough for me. Considering I more than doubled my subscriber count in 2017, I think it’s reasonable to shoot for the same thing again. I have a lot of good videos up already and despite YouTube being up and down in revenue, I figure I might as well press on and see where it takes me. I enjoy making the videos, though they take a lot of time. And with good internet again, I feel much more confident in my ability to press forward.

Goal #5: Stick to a Workout Regimen

Over the last year I dropped below 160lbs for the first time since I was in my early 20s. At my lowest in July, I was 151lbs. That’s rather thin for someone who is 6’1″. I need to eat more meat and lift more weight to build my muscle up. I’d love to reach 170lbs and have it be muscular weight. I’m not sure if I can pull it off, but there’s no harm in trying. I don’t enjoy working out and I don’t tend to eat all that much, so I’ll have to do both regularly to hit this one. At the end of 2017 I got back into a regular workout regimen before jumping into moving and losing my rhythm again. Time to try again.

Finally, I’ve got a ton of other writing and audio editing work I do which has nothing to do with my farming/gardening/homesteading work here. I’d like to really leverage that up into a money making machine so I can be freer to pursue horticulture.

So, what are your goals?

I’ve learned so much from you and your books so I look forward to what you have “coming soon”! The Florida book is my go-to right now so I can’t wait for update#1. I’m also a beekeeper and they’ve survived me so far trying to kill them 80 ways. Poor things…I found natural beekeeping. I went blindly down a bad path because I didn’t know there was another way. I just did what my local beekeeping assoc. said to do.

Good idea. If you have good local beekeepers, they’re a great source of help.