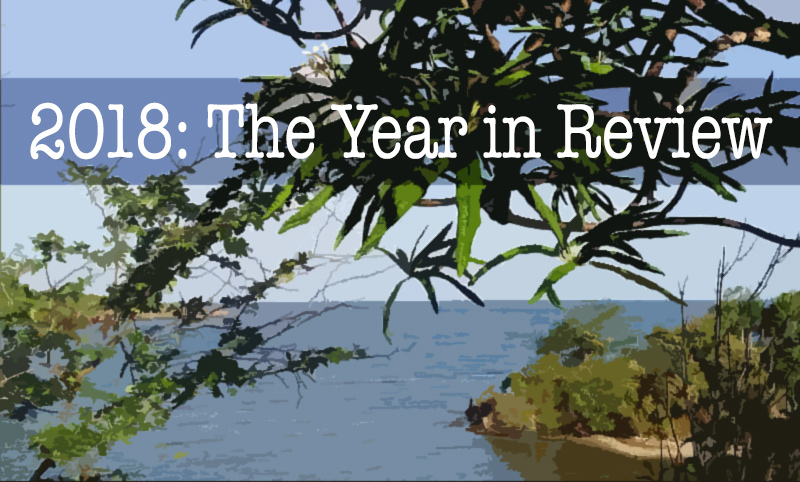 Last year we were renting a farm with lots of land, but that came to an end in December 2017 when we finally gave up on the bad internet and moved into town.

Difficulty: we had no land for gardening!

Fortunately, in the spring I was able to borrow a quarter-acre lot and plant over there, so we at least could keep some greens, corn and pumpkins going.

You can see the whole series of land-clearing and planting here:

It was a ton of work, but we got to garden and keep videos rolling. Having good internet at the new location was a big help as well.

Now let’s take a look at how we did on yields.

Last year I kept careful track of our harvests. This year I didn’t.

My guess is that we harvested about 50lbs of greens, maybe 15-20lbs of okra, about 10lbs of corn and probably 25lbs of pumpkins, and another 5-10 pounds of miscellaneous peppers, tomatoes, etc. It wasn’t huge, but we had little space, little time and lots and lots of trees and brush and trash to clear.

Next year we’ll do much better.

It took most of the year to get some land of our own.

We also left our church because of the issue of infant baptism. Because my children were baptised as infants, they were not allowed into communion, so we eventually had to simply leave the church. Fortunately, we found a moderately conservative congregation that welcomed us in and let the children take part in communion – so this is more of a success than a real failure.

We really didn’t do nearly as much gardening as was normal, for various reasons.

I only managed to release one non-fiction gardening book.

I hurt my shoulder lifting barbells and had to quit working out.

I hired a gal to run social media campaigns for me, which only lasted one month before she became overwhelmed with other work and decided to quit. I quit Facebook and Instagram early in the year, then she convinced me to bring them back, and then she quit… so I have some barely used social media accounts now. I do post on Instagram again, so there is that, but I hate Facebook (it belongs to Satan). The only one I really use regularly other than Instagram is Pinterest, which is a useful place to find and pin ideas. It’s hilarious, though not particularly a monetary success. Yeah, I know, it’s crazy for a gardening author to write a comedic thriller. Taking a foray into fiction doesn’t usually work out all that well for non-fiction writers.

However, I have been signed with a publisher and published five novels under psuedonyms over the last couple of years, so this isn’t exactly new for me, even if it is for most of you. This one was just more fun to write than my usual gigs.

Speaking of that, the sequel to Turned Earth is 1/4 written, which reminds me: I need to make an audiobook version of TE!

I released the audiobook of Push the Zone: The Good Guide to Growing Tropical Plants Beyond the Tropics, which you can get on Audible here, and directly from me here on Gumroad. Overall, the book hasn’t sold in any format nearly as well as my others; however, I knew it was a niche topic and wrote it anyhow. Compared to composting, Florida gardening, or survival gardening, microclimates and frost protection for tropical plants is rather a tiny market.

Speaking of tiny markets, in the last month of the year I pulled off writing a new, in-depth booklet on how I created a successful and profitable backyard plant nursery: It had over 100 pre-orders, plus managed to be a category bestseller in two categories. And the ebook version hasn’t even come out yet!

Thank you all for making the book a success. I hope to see a lot of you applying what I write about and making some extra income. We all need a little help these days.

In my side work, I did a lot of book writing which has nothing to do with gardening. I also managed to produce a lot of audio for a client, though I won’t get into that here. One can’t necessarily live by gardening and blogging alone!

Speaking of that, Rachel also got me to sign up for an ad company called Mediavine. They run ads on this site and I make money. So far, it’s gone great. I make a few hundred a month for doing nothing. Yeah, adding ads to the site does clutter it up a bit, but they’re not bad, especially compared to the old Google Ads I tried running for a month a couple of years ago.

No one wants to see close-up pictures of intestinal parasites.

The biggest success of 2018 is that on Christmas Eve we finally closed on a piece of land of our very own.

I need to get over there and record a tour soon. Maybe today. It’s a half-acre of beautiful soil with some mature fruit trees.

Now I need to build a house. That will be fun.

I’m not a huge fan of interacting with morons in the comments section of YouTube videos, so I’ve rather tired of the medium. That said, I know I need to record more since it would be a shame to just let the channel go. Honestly, it was harder to find good things to post about when I only had a little lot and few long-term gardening projects. How many times could I should my few beds?

Now that we own property, we can really do some cool video projects. It ought to be much more interesting.

My video titled “The Aquaponics Delusion” was headed to be my first viral hit, but I decided to pull it because I had used lots of clips from various aquaponics gardeners’ videos to illustration my points, which I then decided was not nice, despite fair use. People were really roasting me for the video, too, and I just didn’t want to deal with it, so down the memory hole it went.

I still think aquaponics is a lousy idea. I just don’t want to fight over it or make other gardeners look bad.

Interestingly, that defunct video helped me realize what a complete jerk Jack Spirko is, so that was a plus. Now I know who I won’t be promoting or working with in the future. His profanity-laced tirades against me in the comments were eye-opening. In the past, I just figured he was pushy.

Oh – and speaking of that, I had another entertaining run-in with the Straw Bale Gardening Shill (Joel Karsten) this year as well. You can see my post on that here.

Who would have thought gardening could be so controversial?

I started my own side business making benches, tables and other beautiful things out of local and reclaimed wood. That has been successful, though it’s not as easy as writing books.

I was involved in two online summit events, The 2018 Home Medicine Summit and the Garden Hack Summit. My presentations were well-received at both. I recorded a half-hour video on super easy composting for the latter, and my video Starting Spring Gardens From Scratch for the former. That starts the playlist I posted above. The easy composting demonstrations I’m keeping for something else I’m working on now.

I was hired to produce a series of videos for a company called Prepper Advantage, and you can view those info-packed demonstrations on their channel here. That ended in fall and I’m not doing any more, but if you like my normal videos, you should really like these.

You can sign up here and get my new easy composting booklet for free.

Thanks to Aardvark Screenprinting, I got my own collection of T-shirts back in 2017.

Compost Your Enemies is the best seller, and I also added the new Vegan Compost shirt in 2018. The aardvark is just a backburned image – it’s not on the actual shirt. You can get that tee here.

Now that we have land of our own, 2019 should be a very entertaining year and lead to lots of good things.

Thanks for reading – and Happy New Year’s!

Happy Thanksgiving!
Rest in Peace, Wayne
For Sale: A Beautiful Gainesville Home with Gardens and Fruit Trees
Writing Break
2019: The Year in Review

It is snowing outside!

Speaking of composting your enemies…once again you’re ahead of the curve:

“Washington may become the first state to legalize human composting…”

Thanks for all the articles and videos. This site has become a regular daily visit.

Hehheh. That is awesome.