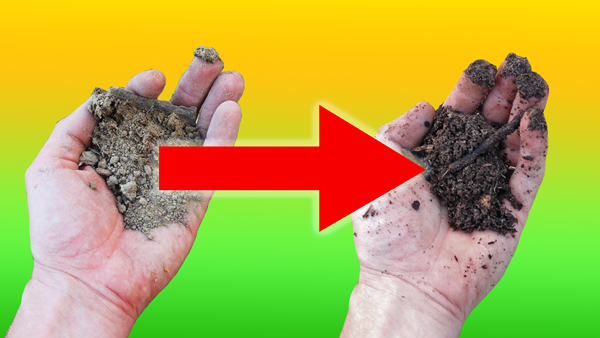 If you want to fix bad sandy soil, these seven steps should help immensely:

Note that this video premieres at 2:00PM CST – I will be answering questions live in the comments.

If you’re dealing with poor sandy soil in your garden, this video is for you. These methods should also help other soil types as well, though I don’t recommend adding bentonite to anything but loose sand – but more on that in a minute.

The Story Behind the Methods

After writing my book Totally Crazy Easy Florida Gardening, I moved away from Florida and spent four years gardening in the thick volcanic clay of Grenada, a small island off the coast of Venezuela. While there, I kept thinking about my years of experience with Florida sand and what could be done to turn sand into soil. Though I had great success with deep mulching in my Florida food forest, over time the humus would break down and disappear unless I continuously added organic matter. I was fighting geology!

When I moved back to the states last year and secured a homestead in Alabama, just a few miles from the Florida border, I finally had my chance to test some of what I had been researching. Our sand here is terrible – which makes it perfect!

Starting with our 2020 fall garden, I did a series of test beds using various amendments including biochar. The results were quite interesting and confirmed some of my thinking on the value of biochar in poor soil as well as the need for micronutrients in growing tasty vegetables.

Now we are installing what I call “Grocery Row Gardens,” containing a mixture of perennial trees, shrubs, berries and vegetables in a sort of hedge-row food forest design I’ve been working on. In this video I am going to show you how I am combining years of tinkering and research together into a garden-improving formula that should work great for other gardeners dealing with poor sandy soil.

It starts… with charged biochar.

This biochar has been soaked for a few weeks in a combination of Dave’s Fetid Swamp Water (which you can learn more about in my book Compost Everything) along with a 4x strength dose of Dyna-Gro liquid fertilizer and a similar overdose of Neptune’s Harvest Fish and Seaweed Fertilizer. Because it’s charged, it won’t suck up the nutrients in the soil when applied. This biochar will raise the exchange capacity of our soil – which means plants can get nutrients more efficiently – act as a battery storing needed elements, and serve as a living place for billions of soil fungi and bacteria.

Biochar also sticks around in the soil much longer than compost while acting in a similar capacity.

In our fall gardens, charged biochar grew sweet, delicious crops that were light years better than the vegetables we grew with 10-10-10.

This is an experiment I’ve wanted to try for a long time. I’ve read about the use of clay slurries to increase the exchange capacity of sandy soils, as well as increasing the grounds’ water holding capacity. It will also help the bed hold on to humus and improve soil tilth.

This bentonite is just unscented clumping kitty litter, which is a cheap and easy way to get it.

Solomon’s Gold is a mix of macro and micronutrients which includes all 16 known elements required for plant growth as well as dozens more trace minerals found in the ocean. You can learn more about it on my website, thesurvivalgardener.com, as well as get the recipe for yourself.

Plants we grew with Solomon’s Gold in fall had amazing flavor.

Get the recipe here.

Though oatmeal sounds like a very strange addition to a garden bed, I added it in order to feed the fungal life in the soil. Fungi like to feed on carbohydrates and oatmeal is cheap – this is just a guess, but I think it will add more life to the ground and help cultivate the leaf mould fungi that will be added in our next layer.

Tilling under the bentonite, oatmeal, Solomon’s gold and biochar will make the nutrients more accessible to plants and change the soil for the better.

Leaf mould contains a wide range of microlife and fungi as well as rich humus. It increases the soil’s water retention, feeds plants and raises the diversity of life in a garden bed.

Alfalfa provides nitrogen as well as other nutrients. It also contains a natural plant growth hormone that can increase the growth of your crops. As a mulch on my beds, it will also help keep the previous leaf mould layer from being exposed directly to the elements. Crops we grew with alfalfa meal tasted delicious.

If we had a final layer of mulch we could add, I would add it now; however, I do not trust straw due to the risk of persistent herbicides and I don’t have a good source of wood chips.

Instead, we’ll be growing our own cover crops and hay and if we need mulch later, we’ll throw it down.

I can’t give you solid results on how this bed will do over time; however, I have enough data from my previous experiments to believe that it will be significantly more productive over time than unimproved soil, and definitely much better than just tilling and adding chemical fertilizer. The bentonite and the biochar should change the soil long-term. I’ll bet that long after we’re gone this patch of ground will be one of the best in the field.

Thanks for watching – be sure to follow along as we see how this garden performs in 2021 and beyond. I’m super excited to see how things take off in spring and I hope you’ll join me.

Until next time, may your thumbs always be green.

How To Harvest and Process Cassava
Primitive Charcoal Making/Biochar Production
7 Ways to Feed Your Garden for Free (now for FREE!)
The Call of the Land
100 Goodstream Episodes
5 comments
PinterestWhatsappEmail

We have exactly the opposite problem of pure alkaline soil
We have been adding sulphur/blood meal/bone meal/ massive amounts of organic with wood chips and compost, and green manure over planting. but very little progress. The clay swallows everything and remains clay

Hi David 🙂 You said bentonite is just clumping, unscented kitty litter – which is what I use for our two indoor cats. What’s your thought on putting their used litter onto the compost? Wouldn’t the urine be beneficial as a source of nitrogen?

The plants would love it; however, I would never put in in the garden because of the risk of parasites. Toxoplasmosis in particular.

How did this turn out?

Very well. It’s a mess of cover crops and weeds at the moment, but we got some great yam roots out of there already. I need to dig the rest.