8 Staple Root Crops You Can Hide In Plain Sight 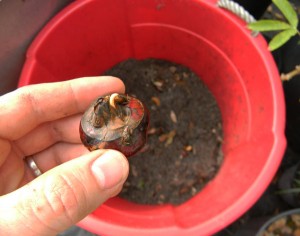 How many roots do Americans eat on a regular basis?
I can think of a few: potatoes, sweet potatoes, onions, garlic, carrots and beets.
Beyond those, you might occasionally use leeks, turnips, rutabagas or parsnips. If you have a yuppie grocery store, you might even find Jerusalem artichokes.
Yet on the grand and glorious palette of edible tubers, rhizomes, corms and bulbs… the grocery store is but a single swatch. Many excellent edibles are off the radar for most of us. We live in a consumer age where mass production and marketing – not to mention increasing urbanization and disconnectedness from the land – have narrowed down our diet to a few shippable and easily produced selections.
Most Americans could wander through my yard (provided I didn’t shoot them for trespassing) and never really see the many edible plants and roots around them. It looks like shrubs, trees, weeds, flowers, creepers and ornamentals… yet there’s food everywhere. Granted, if you prepare some of these crops wrong you’ll get sick or die, but they’re food nonetheless.
Today I’m going to focus on roots and take you on a tour through a few species worth adding to your homestead. The variety may surprise you – and you may even have some of these crops growing wild in your neighborhood already.
Let’s take a look at 8 staple root crops you can hide in plain sight.

Chufa is classified as an invasive weed in some states. That’s my kind of crop! If you can’t beat ’em, eat ’em! Chufa is an ancient staple also known as “tiger nuts.” The edible part is a small roughly 1/2″ corm that develops in networks of roots around the base of the plant. Overall, since it’s a sedge, the chufa plant looks a lot like a weedy clump of grass. The roots are reportedly delicious. (I’m working on growing my first crop of them this summer and I’ll let you know how they turn out in the fall.)

I’ve written an entire post on the winged yam, also known in Latin as Dioscorea alata. Winged yams have a vigorously climbing vines and can develop massive roots up to 100 lbs or more. Plus, they taste great.
If you live north of USDA growing zone 8, you might not be able to grow winged yams; however, you’re likely to have luck with their more cold-hardy relative Dioscorea opposita. That one also has edible bulbils which dangle from the stems in profusion and can be used without digging.

This is a weird root crop in the carrot and parsley family. I haven’t tried them yet here in Florida since they like the cold and we don’t have much of that here, however, for northern gardeners this is famed as a delicious and sweet perennial, though it has woody cores inside the roots.
No one will know what you’re growing when they see this 3′ tall bush with white flowers – and they certainly won’t know what it is if they see its thick cluster of gray-white roots.

Do you have a pond or swamp area on your property? Then you may already have this productive North American staple and not know it. Lewis and Clark lived on duck potatoes during much of their famous journey. Also known as wapato and Arrowhead, duck potatoes are a very common aquatic plant across much of the United States. Their many edible tubers are bitter raw but very good when cooked. Indian women used to harvest them with their feet. My wife is part Cherokee and I find this really foxy.
Whew.
Where was I?
Oh yeah… staple roots. Let’s move on. Quickly.

Ground nuts get confused with peanuts but they’re not anything like peanuts, other than the fact that they both exist inside the great big Fabaceae family and fix their own nitrogen.
Ground nuts, in Latin, are known as Apios Americana and like duck potatoes were a staple of Indians back in the day. (“Back in the day” is the technical term for “before they were run off by expansionist Europeans.”) They’re a vining crop that produces strings of tubers beneath the ground. I’ve read that they can become invasive but haven’t grown them long enough on my homestead to find out.
I hope they are. I like invasive food…
(CLICK HERE to keep reading over at The Prepper Project)

Can You Grow Figs In Florida? The Gainesville Epic Fig Says YES!

"My wife is part Cherokee and I find this really foxy. "

I can see the romance novel titles now:

In the Garden with my Squaw
Her Cherokee Roots
Foot Harvest, my Passion