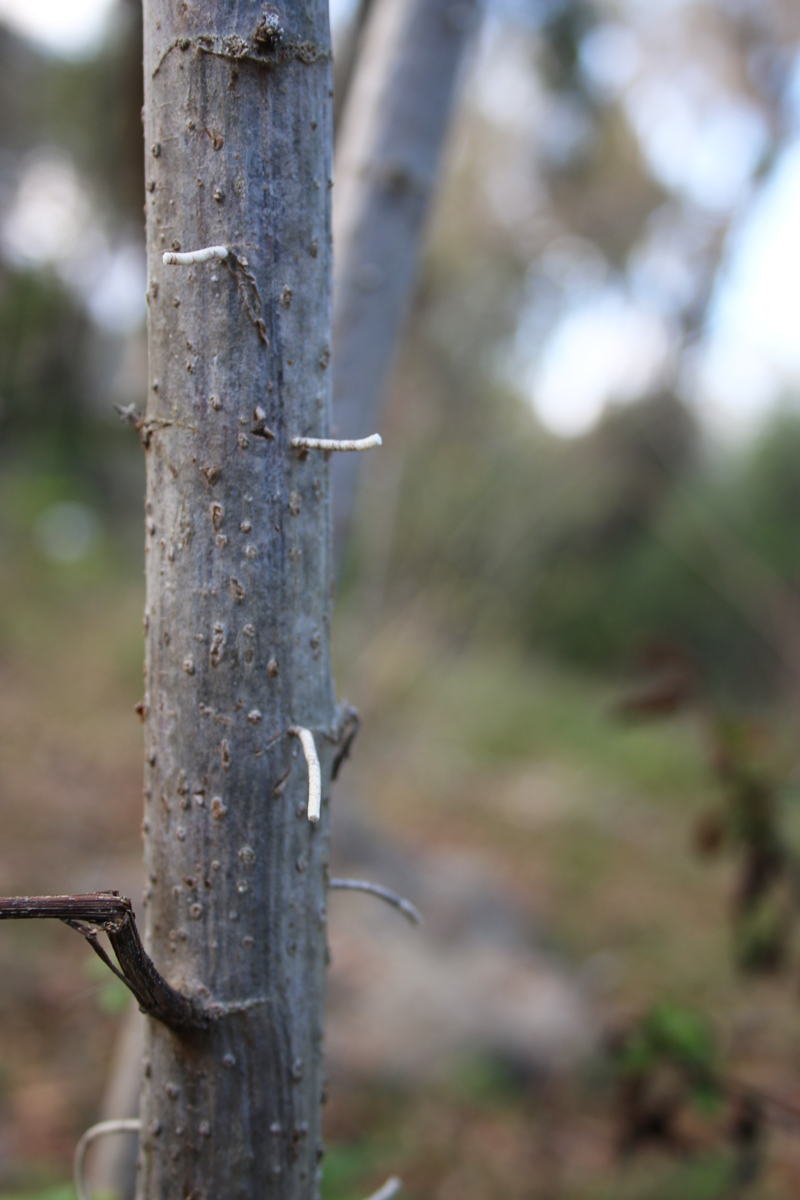 Well, those boring Ambrosia beetles are back: See the sawdust puffs coming out of the sides of these frost-damaged Mexican sunflower stems? That’s the “frass” (a sciency word for insect droppings) from what is likely a species of Ambrosia beetle.

Despite the Ambrosia beetle’s boring tendencies, I still find them quite an interesting species in part because of their relationship with fungi. They carry the spores on their bodies and later feed on the resulting fungi that grow through the plants they bore into.

As UF puts it:

“When the beetles bore into the sapwood of the host tree, the galleries formed from the beetle boring are inoculated with the fungal spores, which then germinate and infect the host tissue (Atkinson and Peck, 1994; Thomas, 2007). The fungus continues to grow in the galleries and adjacent sapwood, disrupting the flow of water and nutrients in the tree. The fungus grows on the living wood of the tree, and the redbay ambrosia beetle adults and larvae feed on the fungus.”

The other part of interest I have in these beetles is purely an economic one.

I was once asked by a customer to provide them with two almost-bearing-age pecan trees. I bought the trees wholesale, but they still cost me almost $100 apiece – and you need TWO different varieties for pollination, so they had to be sold as a matched set.

The day he arrived to pick them up was right around this time of year. The trees were still asleep for the winter and had been waiting in my nursery for a few weeks. It was evening when my customer arrived and had already gotten dark. We went to load the trees into his vehicle when I noticed the tell-tale curlicues of dust emerging haphazardly from the base of one of the two trees… like this: The evidence of ambrosia beetles is hard to miss

“Why not?” he replied, puzzled.

“This one has been attacked by beetles. They’re in the stem right now, spreading fungi and chewing their way through the wood.”

“But… it’ll live, right?” he said, somewhat unsure at this point.

I shook my head in frustration. “I don’t think so. Not the whole tree. It’ll probably come back from the roots, sure, but it won’t be the grafted, full-size tree you ordered.”

He ended up leaving without the trees, and with my apologies.

I was very, very frustrated at that. My nursery ran on tight margins, plus I wanted to deliver on my promises, plus I had driven two hours to pick those trees up originally… and then these stupid little beetles come along and drill into my hard work.

Strangely, they only attacked one of the trees. I later sold the other one at my cost to a friend that had two other pecans in her yard and wanted a third. The tree was already 12′ tall – it was a monster – and it’s not much taller and growing happily in her food forest. You never know where the ambrosia beetle will strike… and the most troublesome right now is the “redbay” ambrosia beetle, at least in terms of economic impact.

The biggest fear right now is the damage they do to avocado trees and other members of the bay laurel family. Further down in the UF article I quoted earlier it reads:

“In Asia and the United States, the redbay ambrosia beetle appears to be most attracted to woody plants in the Lauraceae (laurel) family although there are reports in Asia of the beetle attacking some plant species in Fabaceae, Fagacea, and Dipterocarpaceae (Fraedrich et al., 2008).

Florida has numerous species in the Lauraceae family; some of these are forest species, some of ornamental value, and one, avocado, is a major commercial fruit crop species (Mayfield et al., 2008c; Ploetz and Peña, 2007). At present, the Florida avocado industry covers about 7,400 acres and is estimated to be worth about $13 million annually (Pollock and Perez, 2007).

That’s a lot of potential hosts and it means that if you plant avocado trees in your yard, you’re likely to have other plants nearby that host the redbay ambrosia beetle. They’ll happily bore your trees to death.

I’ve posted on laurel wilt before and my thoughts on fighting back.

There’s really nothing I know of that will totally stop the beetles from boring in the spring, but my bet is that integrating lots of species and encouraging genetic diversity in avocados is a start.

The weirdest thing I’ve seen the ambrosia beetles attack is a Jerusalem thorn tree I planted in my food forest. I’ve seen them on cassava as well.

Are they in your yard right now – and if so, what are they attacking?

Foreign Bananas Are Born In Sin And Filled...

They are currently devouring my new smith fig tree!
After religiously plucking off every young fig last year (to help develop the root system), and covering it during our frosty nights, it’s now barely alive. The beetle damage goes clear to it’s base, so it coming back from the roots is my only hope.
I should probably just cut it into firewood, besides…burning their little babies alive would be immensely satisfying.

They are hitting my young mulberry pretty hard.

Mine too, in central Kentucky. I planted another mulberry and noticed another next to it had these! 🙁

Have them in moringa