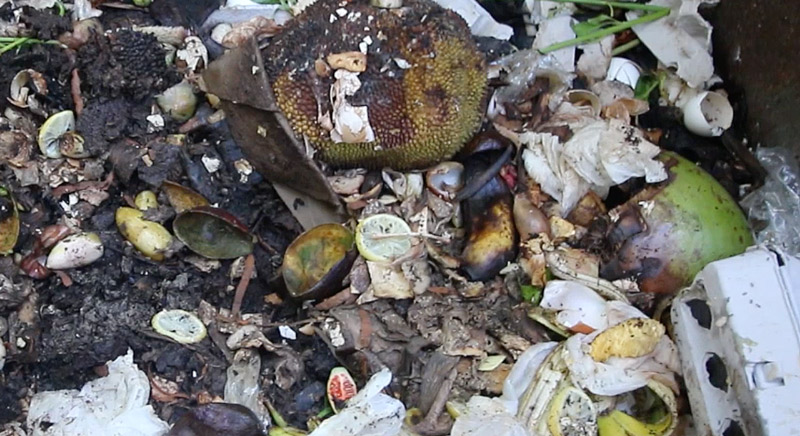 According to a study published in a pay-to-publish journal:

“Americans waste nearly 150,000 tons of food per day, amounting to about one pound (422 grams) per person, and fruits and vegetables are mostly what gets tossed, said a study Wednesday.

The amount of land used annually to grow food that ends up in the garbage in the United States is 30 million acres, or seven percent of total US cropland. Some 4.2 trillion gallons of irrigation water gets wasted, too, said the report in the journal PLOS ONE.

Fruits and vegetables made up 39 percent of total food waste, followed by dairy (17 percent), meat (14 percent) and grains (12 percent).

“Higher quality diets have greater amounts of fruits and vegetables, which are being wasted in greater quantities than other food,” said co-author Meredith Niles, an assistant professor at the University of Vermont.

“Eating healthy is important, and brings many benefits, but as we pursue these diets, we must think much more consciously about food waste.”

America does waste tons of food; however, the way this article spins it makes it look like we are very careful about not wasting junk food whereas we discard vegetables and fruit willy-nilly.

I saw a lot of criticism directed at Michelle Obama’s healthy school lunch program for similar reasons – tons of food was wasted.

“The 2010 law, implemented in cafeterias across the country at the beginning of the 2012-13 school year, was aimed at improving nutrition and reducing child obesity and authorizing funding for federal lunch programs. It called for more whole grains, fruits, vegetables, low-fat milk products and less sodium and fat. It also awards additional funding to schools that meet the standards — to the tune of six cents per healthy lunch.

“The talented people who cook the food at your school will be offering you all kinds of healthy, delicious new choices. Foods that are good for you and taste good, too,” then-first lady Michelle Obama said in a “back-to-school” message at the time. “It’s about ensuring that all of you have everything you need to learn and grow and succeed in school and in life.””
Yeah, it was a nice idea – but children usually choose to eat junk if it’s available and fresh foods are perishable, so a lot of food was thrown away just as you’d expect. A friend told me that he watched child after child throw their salads right into the trash can. It’s good to give children a healthy option but hey – these are the public schools. It’s not like there’s a parent there to make them eat their greens. Nope. Chicken nuggets and chocolate milk über alles!
If you’ve ever gone dumpster diving behind a grocery store (don’t ask), you know that massive amounts of food are thrown away. Boxes and boxes of head lettuces and green potatoes and limp salad greens and bruised apples – it’s amazing.
Yet what kills me isn’t the fact that it spoils before being consumed. It’s that it goes into landfills when it could be composted!
By its very nature fresh food is perishable. It’s also processed before eating. We peel potatoes, core apples, pick the outer leaves off cabbages and throw away yellowed spinach leaves. Grocery stores and restaurants are relentless in disposing of food that won’t sell or present well. It’s a fact of life. But it’s a fact that wouldn’t hurt so much if all that food waste was going back into the ground instead of being mixed into huge piles of toxic materials and lost.
Oh well. We’re not going to fix it any time soon. At least I know the peels from the two bananas I ate yesterday are now in the compost.

Growing Fruit Trees from Seed – What about Chill Hours?

Thanks to you David I have my family and my co workers composting vegetable scraps for me. I work at a firehouse and bring a plastic tote in every shift, I fill it with coffee grounds and my buddies throw their veggie scraps in it for me. At home, my family is used to saving the scraps and I usually come home to a pile of stuff to throw in my compost pile. Coffee filters, paper plates and napkins go in it with the vegetables, and it breaks down fine. My chickens love to jump up in it and go to town. It’s about 2/3 coffee grounds so maybe they are addicted! Thanks for your inspiration and knowledge you share!

That is awesome. I used to bring a trash can to church lunches and collect all the scraps for my birds. They’d turn it into good soil. No loss, plus I gained by not having to buy as much feed.