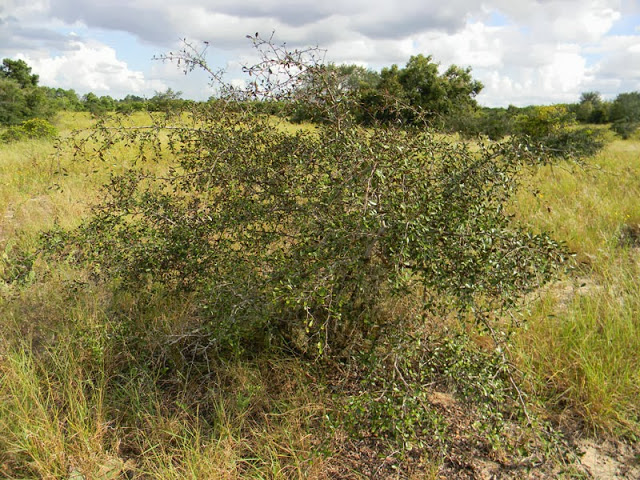 http://www.regionalconservation.org/beta/nfyn/plantdetail.asp?tx=Krugferr  (click shirley denton link for  info)
http://www.plantcreations.com/krugiodendron_ferreum.htm
Those still weren’t quite it, but they were two more plants I’ve never encountered. I’m getting quite an education. The thing that stands out on this particular plant are the brown leaf bottoms.
Finally, I got my answer in an e-mail today (Sunday) from Bunny with the Florida Native Plant Society.

I was looking for information about Seminole Pumpkins (or something?) when I got sidetracked checking out your blog. I belong to the Florida Native Plant Society, which makes me an expert at nothing. But your Unknown Eleagnus does look familiar to me. I believe it might be a Tough Bully (Sideroxylon tenax) or a Florida Bully (Sideroxylon reclinatum), which are both found in your area. I often use the Atlas of Florida Vascular Plants to check plants out. It has pictures and good information. Here’s the link for Sideroxylon. See what you think. By the way, your painting of sweet potatoes is really nice!”
She likes my paintings… and she can ID obscure edibles. Hard to beat that.So – this is it! Check it out:
http://www.florida.plantatlas.usf.edu/Plant.aspx?id=3285
The plant is NOT an Eleagnus at all – it’s a “Tough bully.” (The worst type of bully, if you ask me… I prefer the weak ones that buckle after you throw your first punch), also known more scientifically as Sideroxylon tenax.Fortunately, it’s not poisonous. Unlike the other options, this guy matches on fruit, leaves, growth and everything. It’s also a dead ringer for an Eleagnus, strangely enough. Here are some photos from that link: How To Get Your Husband’s Help Gardening